Trust and a sense of belonging, as well as an emphasis on duty in addition to rights, are key to preserving the freedoms of democratic society, according to writer and philosopher Sir Roger Scruton, speaking at CEU November 16 as part of the Rethinking Open Society series. Scruton, whose lecture was entitled “Liberalism and Loyalty,” is a fellow at the Ethics and Public Policy Center in Washington and a contributing editor to The New Atlantis.

Scruton’s past expressions of conservative views on homosexuality and gay marriage have offended many in the CEU community, some of whom objected to the invitation to Scruton to speak. CEU President and Rector Michael Ignatieff acknowledged those objections and said he had already conveyed the criticism to Scruton, then explained that the examination of open society and the threats to liberal democracy must include a look at the conservative perspective. 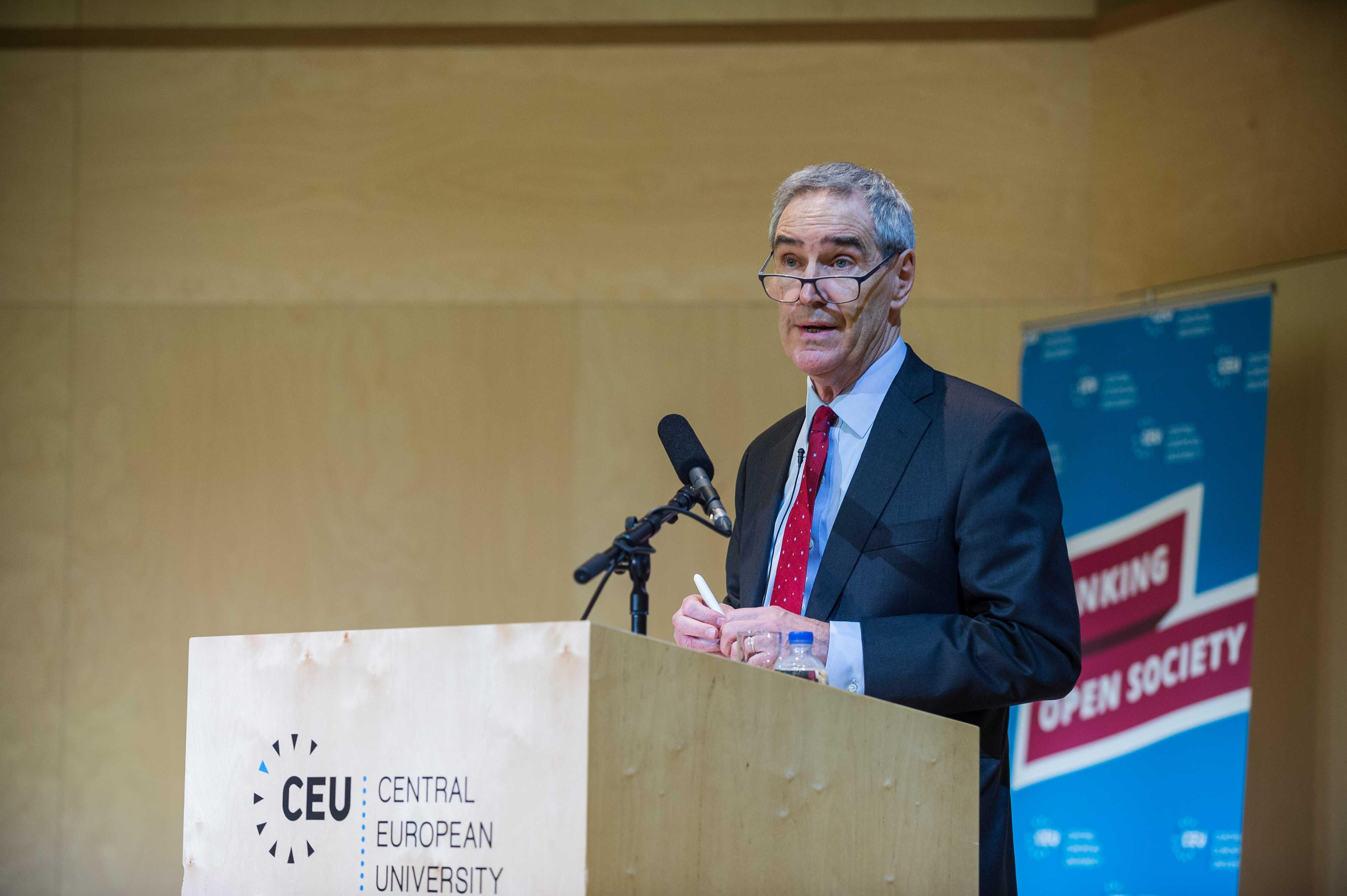 “This is a community of equals… deeply committed to equality of respect, to affection, to work hard together whatever our beliefs, whatever our origins, our orientations, our identities, and that commitment to the moral unity of our community is and should be unshaken,” Ignatieff said. “The purpose [of inviting Scruton] was that in a more than year-long project to rethink open society, you’re not doing your job as a community unless you invite and welcome a conservative philosophical critique of the open society idea.”

Open society claims to protect a set of freedoms of the individual, but it neglects to outline the corresponding duties of citizens, Scruton said. Kant conceived of duty as the first priority, and rights stem from those duties, he said.

“The free being is bound by the moral law, which imposes the duty to treat humanity always as an end in itself, and never as a means only,” he said. “If there are universal rights, this is simply a consequence of the fact that there are universal duties, notably the duty to respect each other as sovereign individuals, to tell the truth, to keep our promises. In such a view there is a balance between rights and duties.” 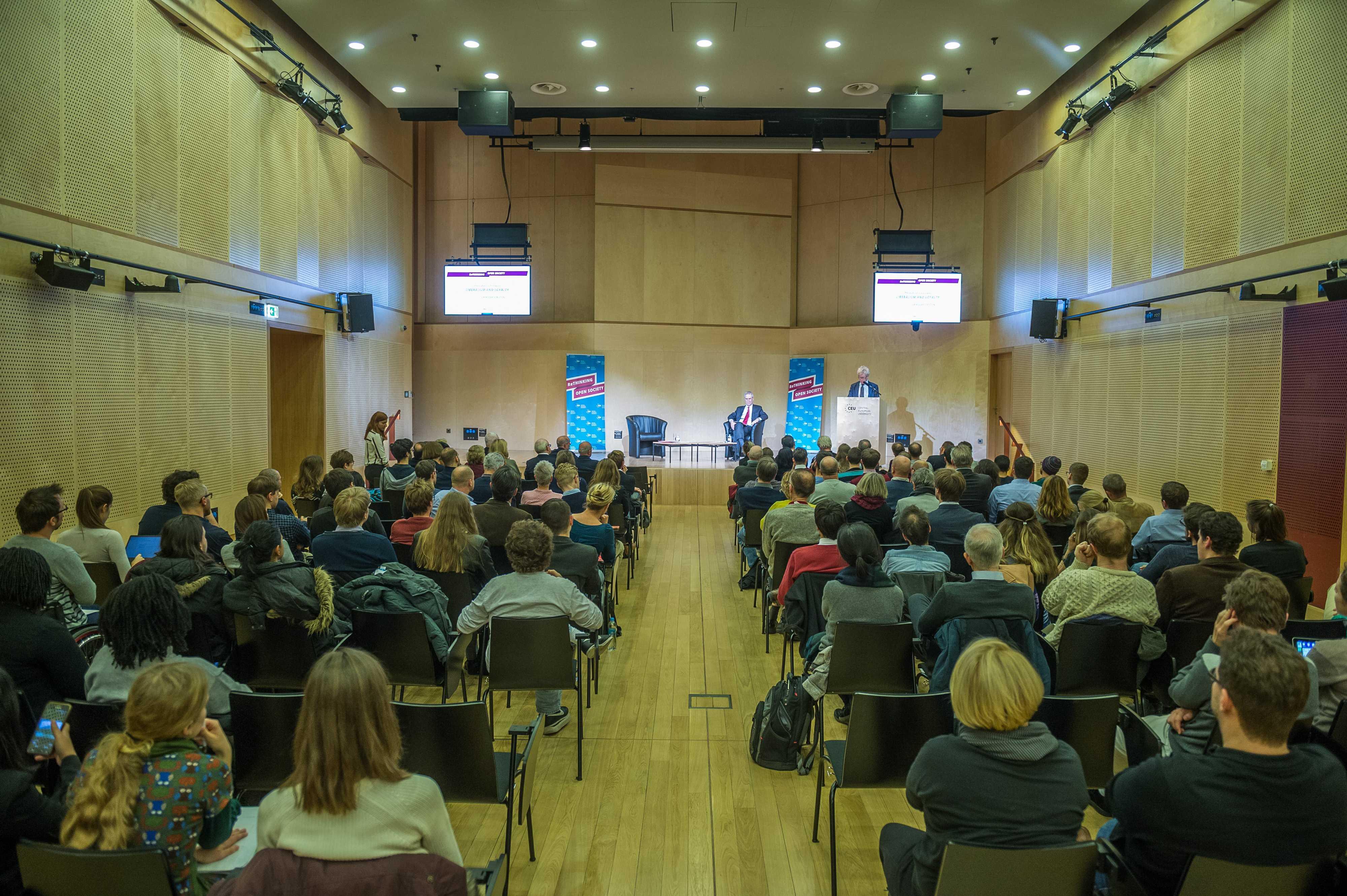 This balance has been upset by universalist views that have caused the expansion of rights, which in turn give power to the state by requiring it to provide those rights, Scruton said.

“Human rights, which began life as basic freedoms, soon began to include elaborate claims – to health, work, security, family life and so on – which are available only if someone is prepared to provide them,” he explained. “That which was conceived as a limitation to the power of the state soon became a way of increasing that power, to the point where the state, as guardian and provider, occupies more and more of the space once allocated to the free acts of individuals.”

Scruton went on to explain the necessity of trust and a sense of belonging among individuals in order to form a community. Trust naturally grows in small units like the family or the neighborhood. In order for it to include strangers, this trust must somehow extend outward, but it cannot be mandated. While urban elites form connections through networks, across national boundaries, but there is “another class of people, rooted in a place, an identity tied to language, faith, et cetera,” he said, adding that these people are often neglected in liberal thought.

“Liberal individualism offers no answer to why we should trust [outsiders],” he said. For the acceptance of outsiders, we need “another kind of ‘first-person plural’ community than one based on religion… a sense of belonging derived from an inclusive political process.”

Scruton emphasized the development of an open trust, one that does not depend on surrender to an authority, in order to preserve our freedoms in the long run.

Trust “must help us to move away from religious and tribal forms of society and toward the condition of citizenship,” he said. “This means replacing belief and kinship by neighborhood and secular law as the paradigm forms of association,” Scruton concluded. “And that, I think, is the real achievement of Europe - to create the nation as the object of loyalty and the secular state as its expression.”