November 21, 2017
#IstandwithCEU
News
CEU Planet
The Office of the Provost and Pro-Rector

CEU Provost Liviu Matei delivered the keynote address, entitled "Universities in Danger," at the annual Die Zeit Conference on University & Education, which provides a platform for high-level representatives of higher education institutions and research organizations, the business sector and the media, as well as policymakers from Germany to exchange ideas and discuss topics of public relevance in higher education and science policy. The theme of this year’s edition, held at the Allianz Forum in Berlin on November 16, 2017, was “How Political is Science”? 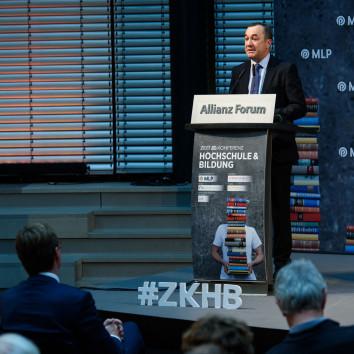 Matei spoke about dangers for universities in pursuit of their intellectual and social mission, resulting from restrictions of their freedom, or freedoms. He reviewed sources of dangers, ranging from state ideology, legislation and policies in countries like Russia, Turkey and Hungary, to dramatically changing public policy narratives touching on higher education in many European countries. He spoke of the responsibility to protect universities, and whether this is an obligation for the state, for the higher education institutions themselves, for the civil society, or for other forces and organizations.

Matei's talk concluded with an analysis of the impact of international solidarity with universities in danger, building on the CEU case. Matei expressed thanks on behalf of the CEU community for the enormous support CEU has received from Germany since the beginning of the current crisis in Hungary. The host of the conference itself, Die Zeit, is one of the most important media organizations worldwide advocating in favor of freedoms of the university, and a staunch supporter of CEU.