Move Away From the American Dream to Address the Recognition Gap, Lamont Says

We cannot understand inequality without thinking about recognition, according to Michele Lamont, Professor of Sociology and of African and African American Studies and the Robert I. Goldman Professor of European Studies at Harvard University. In Western societies, worthiness is defined by socio-economic success, creating a recognition gap between social strata, said Lamont, who spoke as part of the Rethinking Open Society series at CEU on December 4.

“One of the aspects of Lamont’s work that is enormously illuminating is her attempt to give sociological meaning and precision to concepts like dignity, feelings like stigmatization, and the inner experience of oppression and exclusion, ” CEU President and Rector Michael Ignatieff said in introducing Lamont. “An open society isn't just a society that respects the equality of individuals, it is not just a society that is open to the external world, it is a society that cares deeply, one by one, about the dignity of its members.”

In analyzing the recognition gap Lamont works with the terms recognition, stigmatization, cultural membership or belonging, and cultural repertoires, which define the scripts by which members of societies make sense of their role in them.

Neoliberalism has an impact on the definition of cultural membership across societies with more emphasis on self-reliance, competitiveness. It is through socio-economic success that people define a worthy person, and this translates into a narrowing of cultural membership, and a growing recognition gap,” Lamont said.

In France, boundaries of the downwardly mobile working class towards Muslims, blacks, to the poor and even the youth have hardened since 1993, and the trend is similar in the United States, Lamont said, comparing research results for her award-winning book, “The Dignity of Working Men” (Harvard 1993) and for more recent publications. More people explain poverty by moral failure now than 20 years ago, and even African-Americans who have traditionally been more supportive of the poor are showing less solidarity.

“We see a decline in blatant racism, but total racism remains quite strong and institutional segregation and spatial segregation have strengthened over the last few years in the U.S.,” Lamont said.

Stigmatization is overlooked in the literature on inequality, which focuses more on discrimination, which is easier to analyze based on employment and other available data, Lamont said. 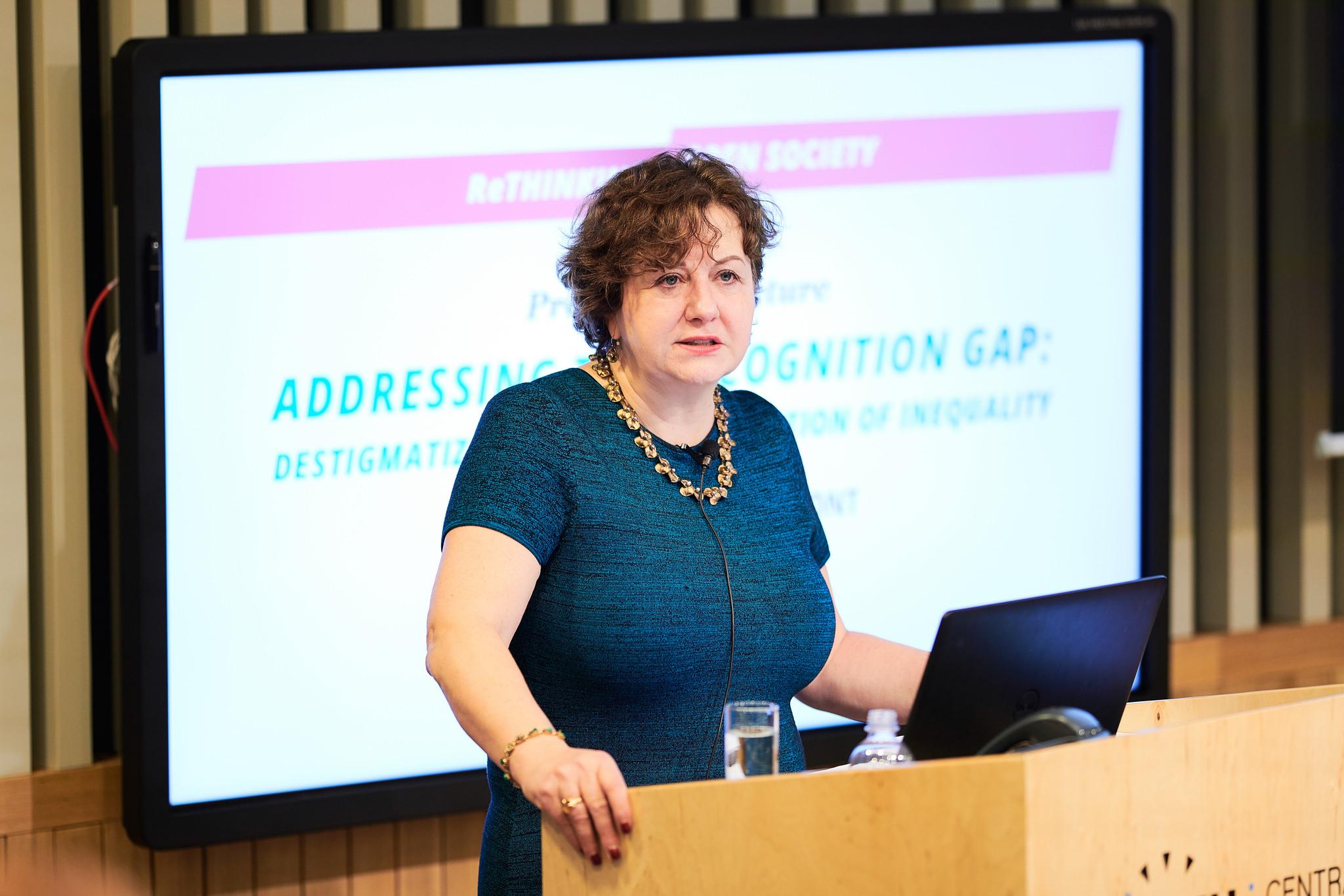 “We see a decline in blatant racism, but total racism remains quite strong and institutional segregation and spatial segregation have strengthened over the last few years in the U.S.,” Lamont said. Image credit: CEU / Daniel Vegel

“Stigmatization is an assault on the self, and it is as important a dimension of racism as discrimination is,” Lamont said. In the book “Getting Respect: Responding to Stigma and Discrimination in the United States, Brazil, and Israel” (Princeton 2016), Lamont and the other contributors looked at the discriminatory experiences of African-Americans, black Brazilians, and Arab Palestinian citizens of Israel, as well as Israeli Ethiopian Jews and Mizrahi (Sephardic) Jews.

Respondents generally talked about being overlooked, underestimated, and being ignored, all signs of stigmatization, according to Lamont. Their strategies in dealing with these experiences vary widely, with African-Americans choosing confrontation in most cases, while Palestinians choose self-isolation, and no response. Reactions to stigmatization are determined by historical, socioeconomic, and institutional background factors, groupness, and the cultural repertoire.

We must change the way we think about success, and reflect this change in our institutions and cultural dialogue, Lamont said.

“We need to denounce in some ways the American Dream, not because we want the poor to continue to wash toilets, but because an American dream that defines success in terms of what the top 25 percent can achieve, determines the majority to be losers. We have seen this in the meritocracy obsession of the last 20 years, which creates a lot of helicopter moms and a lot of suicidal teenagers,” she said.