In advance of Germany’s Social Democratic party (SPD) agreeing to form another “grand coalition” government with the conservative Christian Democratic Union (CDU), Director of the German Council on Foreign Relations Daniela Schwarzer spoke at CEU on “Germany and the Fate of Open Society in Europe.” Her lecture was part of CEU's ongoing series Rethinking Open Society. Expectations of the newly formed government will be very high, she said, but she noted that the country has learned important lessons since both the financial crisis and the refugee crisis. As the largest contributor to the EU budget, Schwarzer noted that it is in Germany's “profound interest” that the EU and its single market are stable and she expects a policy on EU affairs which is in continuity with Germany's last grand coalition, only more ambitious.

“We are a country that benefits greatly from both the single market and from the euro as the single currency, a country which has greatly benefitted from the fact that the EU has enlarged toward Central and Eastern Europe,” Schwarzer said. “This is an important context for German economic success and, hence, all the splits that are now sort of projected as being the challenges for the EU – both the north/south divide and the east/west divide are something that German policymakers are very concerned about. I think here is a learning process that Germany has gone through.”

Schwarzer focused on three main lessons that she believes Germany has absorbed and will consider as the new government moves forward. First, she said, Germans now realize how polarizing their positions were after the eurrozone crisis. Political tensions rose quickly and unkind words were exchanged in the media as negotiations for a Greek bailout stalled.

“The extent of the public naming and shaming and the harsh words found in the press in each of the countries was a shock to many. It showed that what we thought was the political culture of the EU maybe wasn't that stable and that polarization and blaming could be unleashed very quickly.”

Berlin is increasingly concerned about the divide – real or perceived – between the north/south of Europe and the east/west, she said. An “extent of correction” is being made due to the failure of some policies that Germany thought were right for southern Europe but ultimately were not.

The third lesson, she said, is not only about keeping the euro together but also about maintaining stability both in political and social terms in EU member states. Ultimately, Berlin saw that something had to give regarding southern Europe, she said. “I believe that, since then, the reflection process in Berlin has moved on as to be able to answer what is it that we are willing and able to give in order to rebuild consensus and compromise and keep the eurozone together in a sustainable way.”

In terms of the values of open society, she noted that the topic of lex CEU sparked much debate in Berlin. Political exchanges about democratic backsliding were underscored by what was happening in Budapest.

“What I see emerging in the politcal exchanges with policymakers in Berlin is a growing concern that at least some countries in CEE are backsliding on democracy, are questioning western liberal norms, implementing reforms that undermine open society,” she said. “I would say that, in Berlin, the law tabled by Orban on this univesity was a wake-up call. A concensus that emerged at that time was that this is not about Hungary and a particular problem within Hungary, but it is instead, to some extent, about the credibility of Europe – whether we can watch as a university that subscribes to the norms of open society and Western liberalism is threatened with closure. This was an important moment around this time last year when the political discourse in Germany changed.” 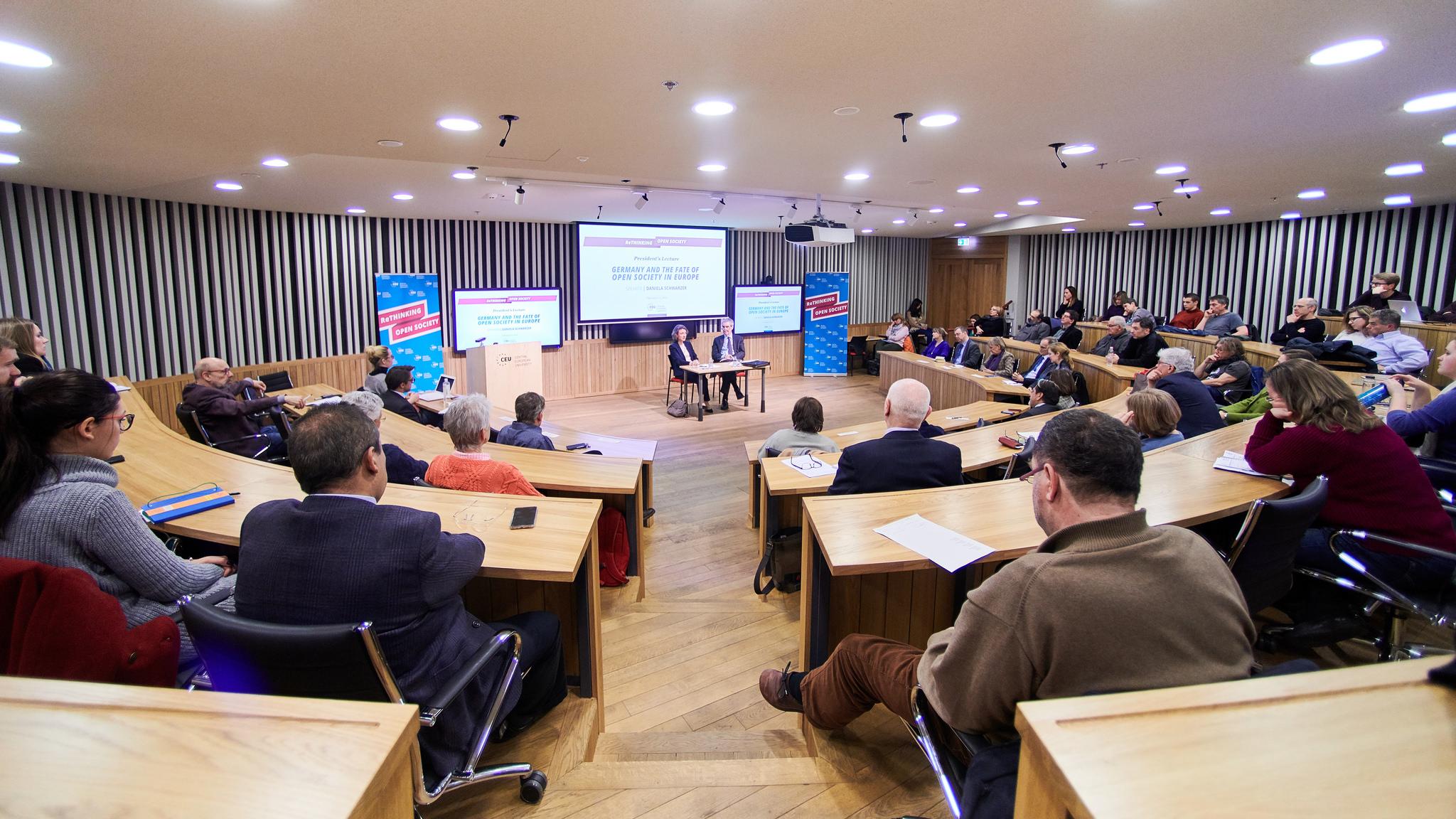 Schwarzer believes that democratic backsliding needs the “highest degree of political attention” and noted that some options have been put forward to determine if incentives can be provided to countries that have moved away from democratic norms that they had implemented when they joined the EU. These proposed incentives would be tied to EU funds but she noted they would be very hard to implement because you need unanimity to change the functioning of the multi-annual financial framework. She hopes the coalition will pay very careful attention to the issue as there are currently no tools in the EU to prevent it. “The question, indeed, is if certain expenditures can be linked to the respect of the rule of law, for instance, the fight against corruption. This is a broad issue for the EU and I hope that the German government – which has leverage, of course, being the largest contributor to the EU budget – uses when the negotiations come to full speed in the coming month.”

Schwarzer said that Germany sees the future through the prism of the EU and understands that dialogue with other countries will help ease the divide between north/south and east/west. She recommends increased interaction between parliamentarians from different countries so important topics can be discussed in depth, not just superficially. She hopes that dialogue with citizens of different countries can also deepen through Germany's many foundations that have a presence in many EU countries.

One of the major topics that continues to cause tension in the EU is migration and refugee policy. Schwarzer acknowledged that the issues of borders and border control require a joint EU policy.

“What has to be acknowledged is that the way the EU internally tried to handle the inflow of migrants with the famous quota system and the decision to take a qualified majority vote on it hasn't proved politically sustainable,” she said. “It's not being applied and it's very hard to imagine a situation where pressure is put on govs to implement this, simply because the political price is seen as very high, but that doesn't mean it's wrong to pursue a European approach. I think the way you set up the scenario and basically singling out individual countries because of their borders who have a particular political leverage on the issue and then can blackmail others – that's pecisely part of the problem.”

Germany's position as a leader in the EU was also strengthened, she said, during the Ukranian conflict with Russia and with Merkel reminding U.S. President Donald Trump of shared norms and values and that the transatlantic relationship was built upon these tenets. Schwarzer anticipates that Germany will continue to be a leader in the EU but she emphasized that the country seeks to co-lead with input from its partners.