War Can Bring Social Progress, But We Must Remember the Costs, MacMillan Says

Social progress, prosperity, security, and the concept of open society all emerged from the horrific ordeal of war, according to Margaret MacMillan, professor at the University of Toronto and the former warden of St. Antony's College, speaking at CEU March 7 as part of the Rethinking Open Society series hosted by CEU President and Rector Michael Ignatieff.

“There is a deep historical relationship between the terrible ordeal of war and some of the social innovation that occurred afterwards and created the open society vision,” said President and Rector Michael Ignatieff in introducing MacMillan, author of seminal works of modern history including “Nixon and Mao: Six Days that Changed the World,” “Women and the Raj,” “Peacemakers: The Paris Peace Conference of 1919 and Its Attempt to End War,” and "The War that Ended Peace: The Road to 1914." 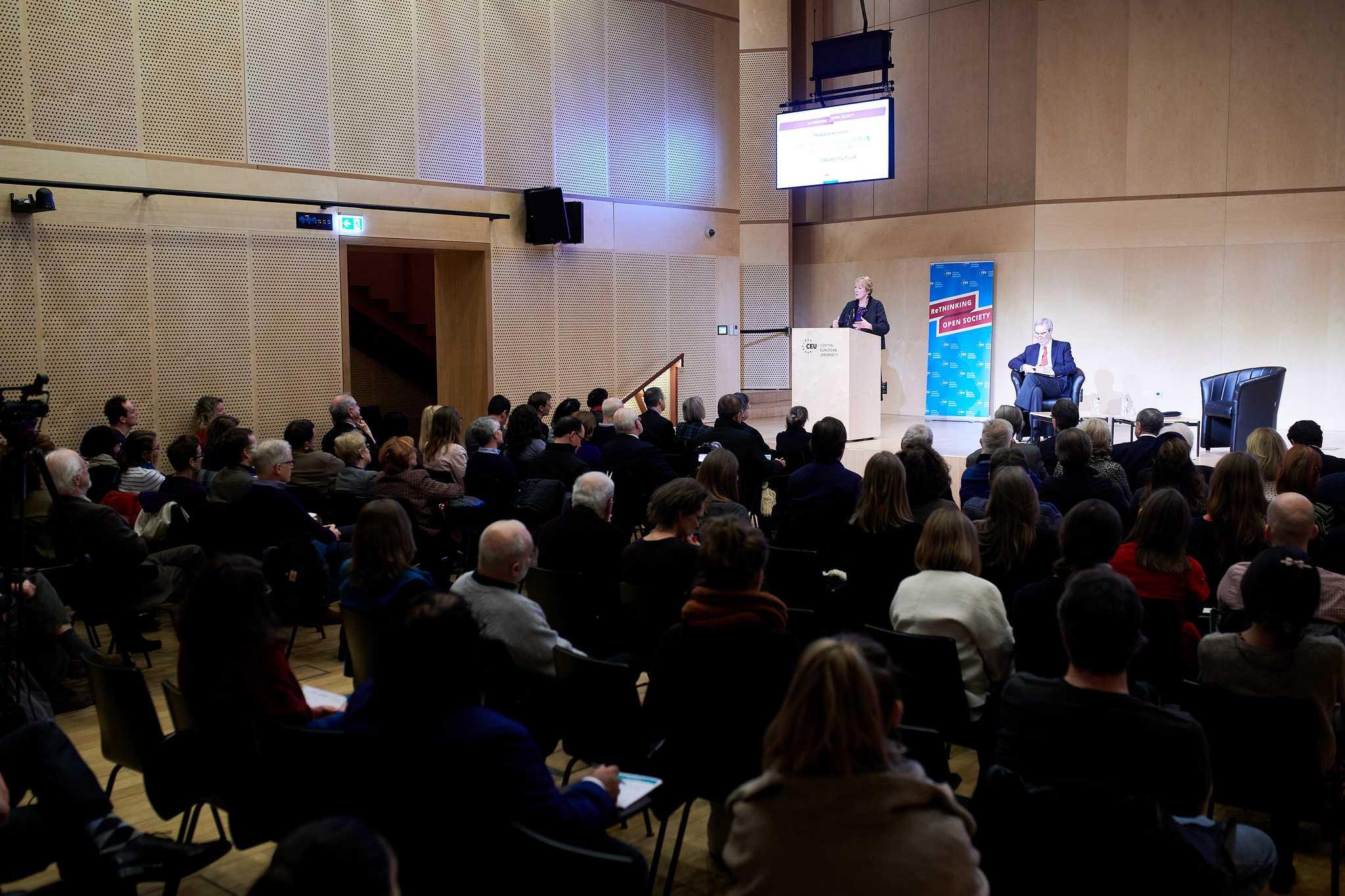 Margaret MacMillan, professor at the University of Toronto and the former warden of St. Antony's College, speaking at CEU March 7 as part of the Rethinking Open Society series. Photo: CEU/Daniel Vegel.

War has been a recurring feature across human history - i.e. it is not an aberration - and brings about vast social changes, MacMillan began. In the 20th century, when war became total, that social change was broader and deeper because war affected entire societies, she said, in a lecture entitled “War and the Open Society in the 20th Century.”

“There is a paradox in war, an uncomfortable one. It brings enormous destruction and death. We should want to avoid it. But it can also bring progress and peace,” MacMillan said. “Historians and anthropologists have long argued about the utility of war and its effect on how human societies organize themselves… War has the unintended effect of producing larger political groupings that help with human progress. Secondly, governments see the need to compensate their people for the costs of war.” 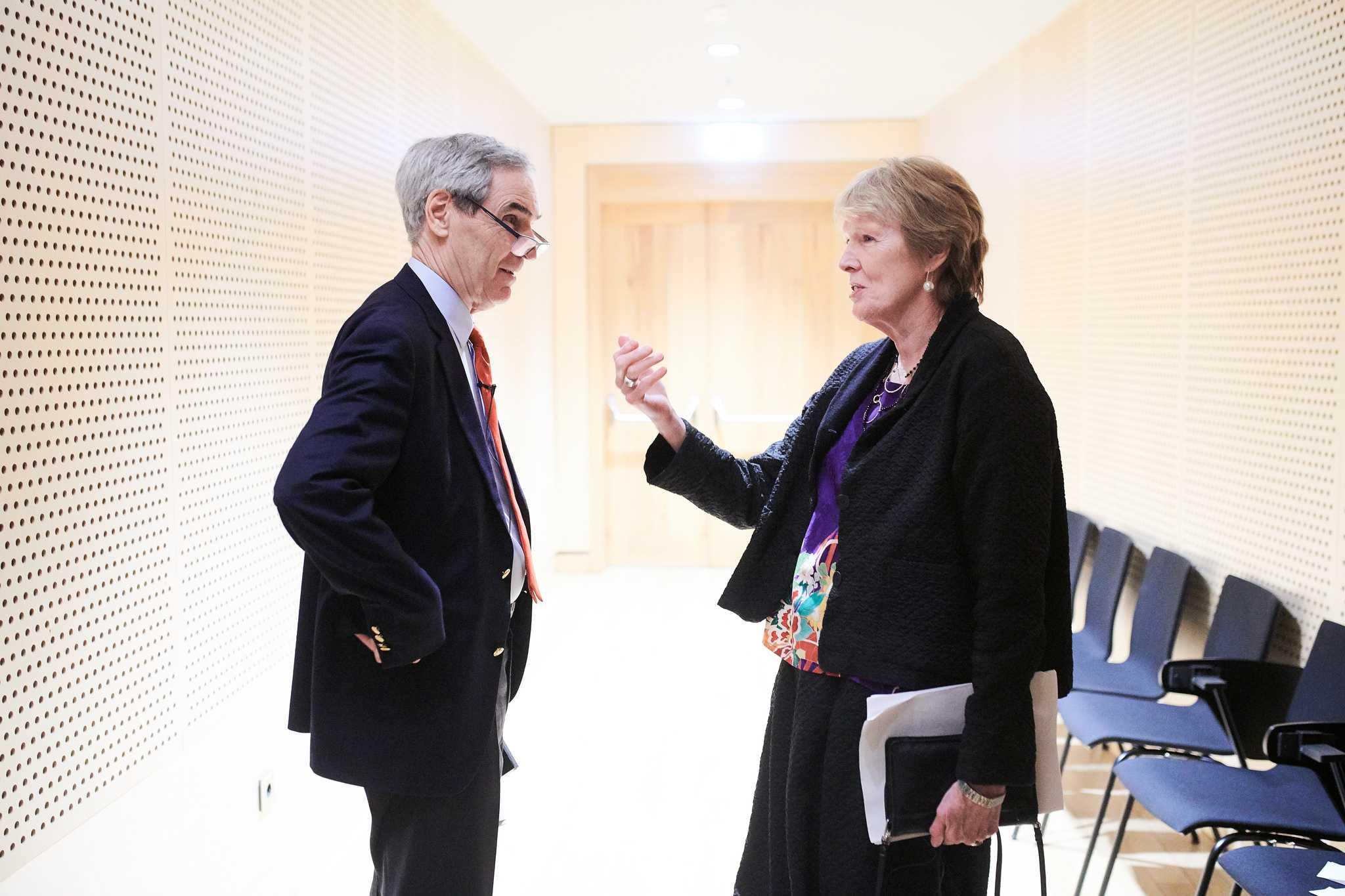 Wars were once short and decisive, and by 1900, Europeans could look back on nearly a century of progress, prosperity, and peace. There was optimism that representative institutions brought stability. Nevertheless, chauvinism grew, as did fear of the ‘other’ and of early forms of globalization, similar fears we are seeing in Europe today, MacMillan said.

Then the 20th century brought two total wars. Governments had to make promises to the population to defend the decision to fight – greater democracy, greater freedoms, equal, tolerant, open societies. After World War I, women in the U.K. were given the vote, “which was not granted so willingly, but it was recognition that women played an important role in wartime,” MacMillan said. Social benefits were increased to acknowledge the contribution and suffering of the people.

“Wars also have had the effect of adding to social cohesion,” MacMillan said. “20th-century wars also discredited totalitarian and authoritarian regimes. Germany was not very efficient. Britain, a democracy, was better at mobilizing resources for war. The Nazi war effort was initially good, but in terms of mobilizing resources and treating people fairly, it showed inefficiency of totalitarianism. It was the same with Japan, which managed the war very badly. In democracies, people can speak the truth to their leaders.”

As war became total and the scale of killing became massive, governments and society began to think about ways to avoid conflict. The International Federation of the Red Cross was founded in 1919 and the League of Nations in 1920. 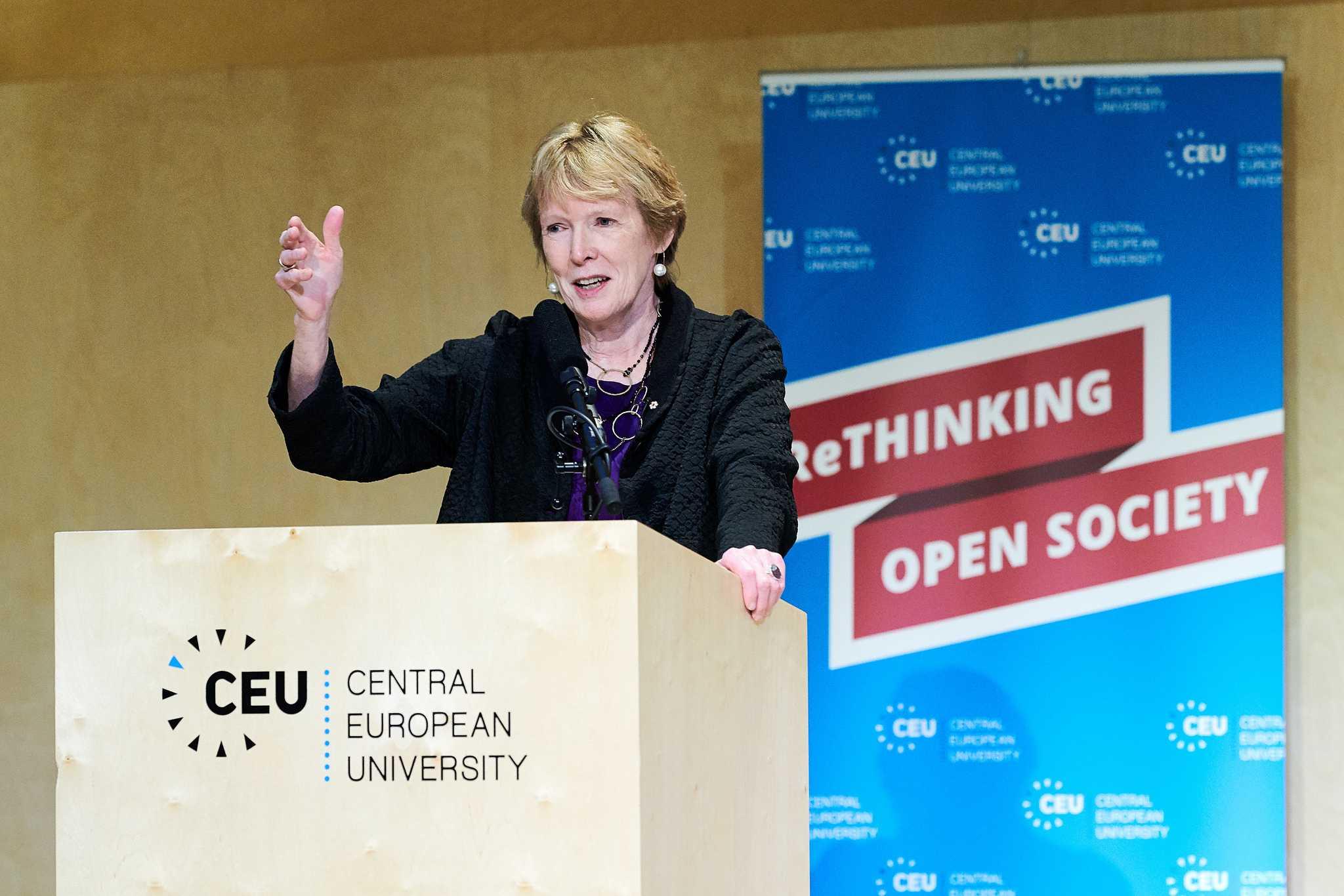 “We should not regard [the League of Nations] as just a failure. The League of Nations introduced new methods and ideas into international relations and enjoyed tremendous public support all over the world at the time,” she said.

Other organizations, such as the World Health Organization and the International Labor Organization were also founded and schools, thinktanks and institutions were set up to try to solve all kinds of societal problems. In 1941, Franklin Delano Roosevelt summarized the values of democracy in his “Four Freedoms” speech indicating that freedom of speech, worship, freedom from want, and freedom from fear should be available for everyone in the world. This was reflected in the United Nations Charter in 1945, creating a new institution that however imperfect would try to work toward a better society on a global scale.

MacMillan said that since then, the scorecard has been mixed. While there have been no conflicts of the scale of the world wars, there has been backtracking in terms of progress toward the four freedoms, particularly in reaction to the 2001 terrorist attack on the World Trade Center.

“We see today fears of terrorism and the willingness of people to give up certain freedoms for the war on terror,” she said. “The war on terror should never have been conceived as a war.”

“We see a backlash to globalization, the rise of illiberal populist movements on the right and left,” she continued. “We have an international order, and it has managed since 1945 but I worry that any international order can only take so many countries that do not buy into it.

The faded memory of war may also make for a dangerous future, she warned. While wars may spark human progress, the power of today’s weapons and the scale of possible destruction are formidable.

“What’s dangerous is that the people who made the new institutions after WWI and WWII knew what they wanted to avoid,” MacMillan said. “With the passage of time we forget. The impetus behind such organizations and trying to build a better society is very important. If we forget it, we open the door to things that will damage us all.”