The Middle Ages Turn 25 at CEU

The Department of Medieval Studies at CEU celebrated its 25th anniversary by inviting the public to "Visit the Middle Ages." With a knight in full armor, nomadic warriors demonstrating their skills with sabre and lance, noblewomen and peasants showing crafts from painting to papermaking, ceramics to glass, medicine to clothing, CEU's Nador 13 Atrium building was transformed into a medieval fair. 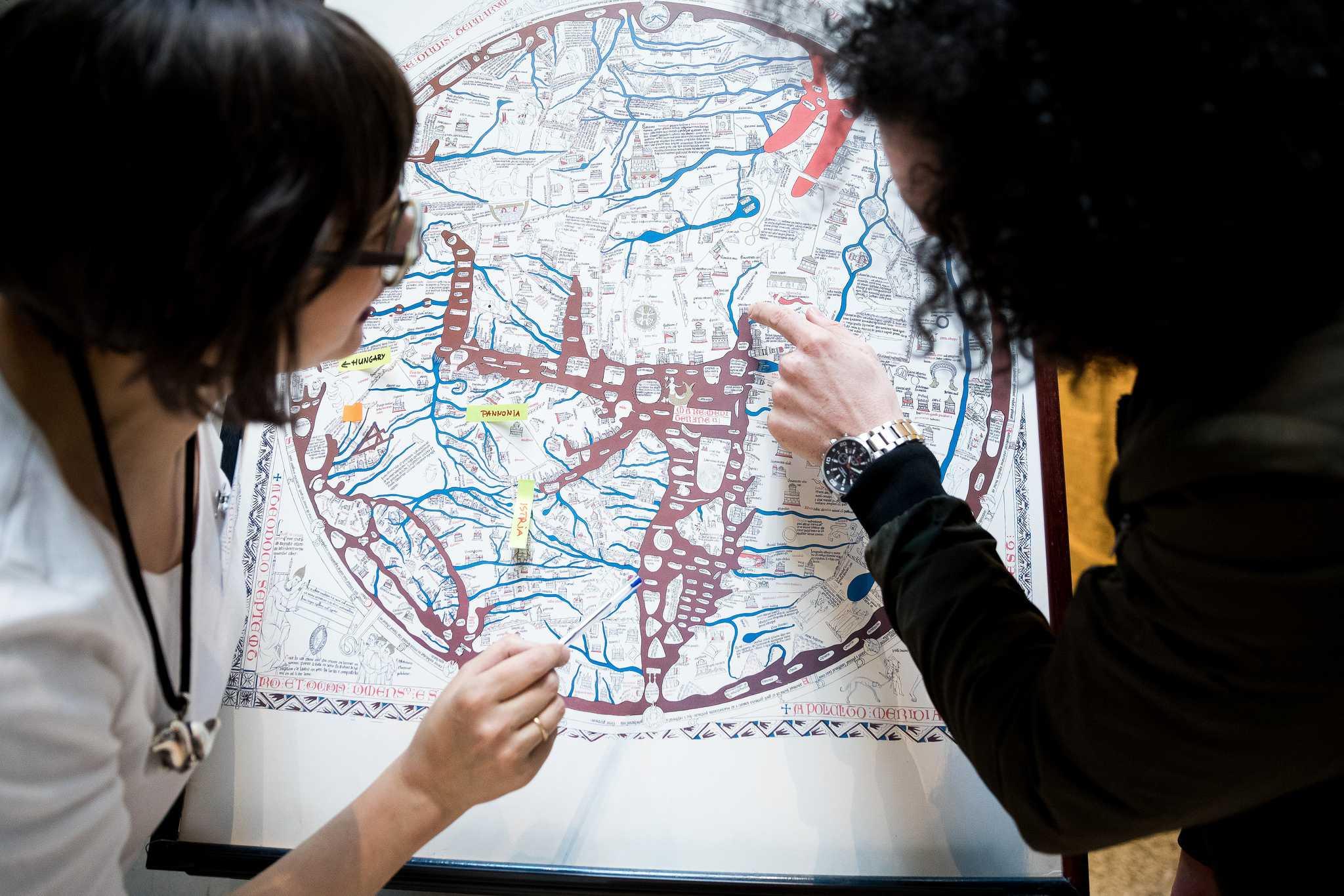 The  interactive exhibition showed the manifold ways the Middle Ages can be approached and researched. From the knight in shining armor, later identified as Professor Jozsef Laszlovszky, to Research Assistant Kyra Lyublyanovics, whose display of medieval animal bones illustrated how animals were kept and treated centuries ago, many of the exhibitors were students, faculty, alumni, or staff of the Department. 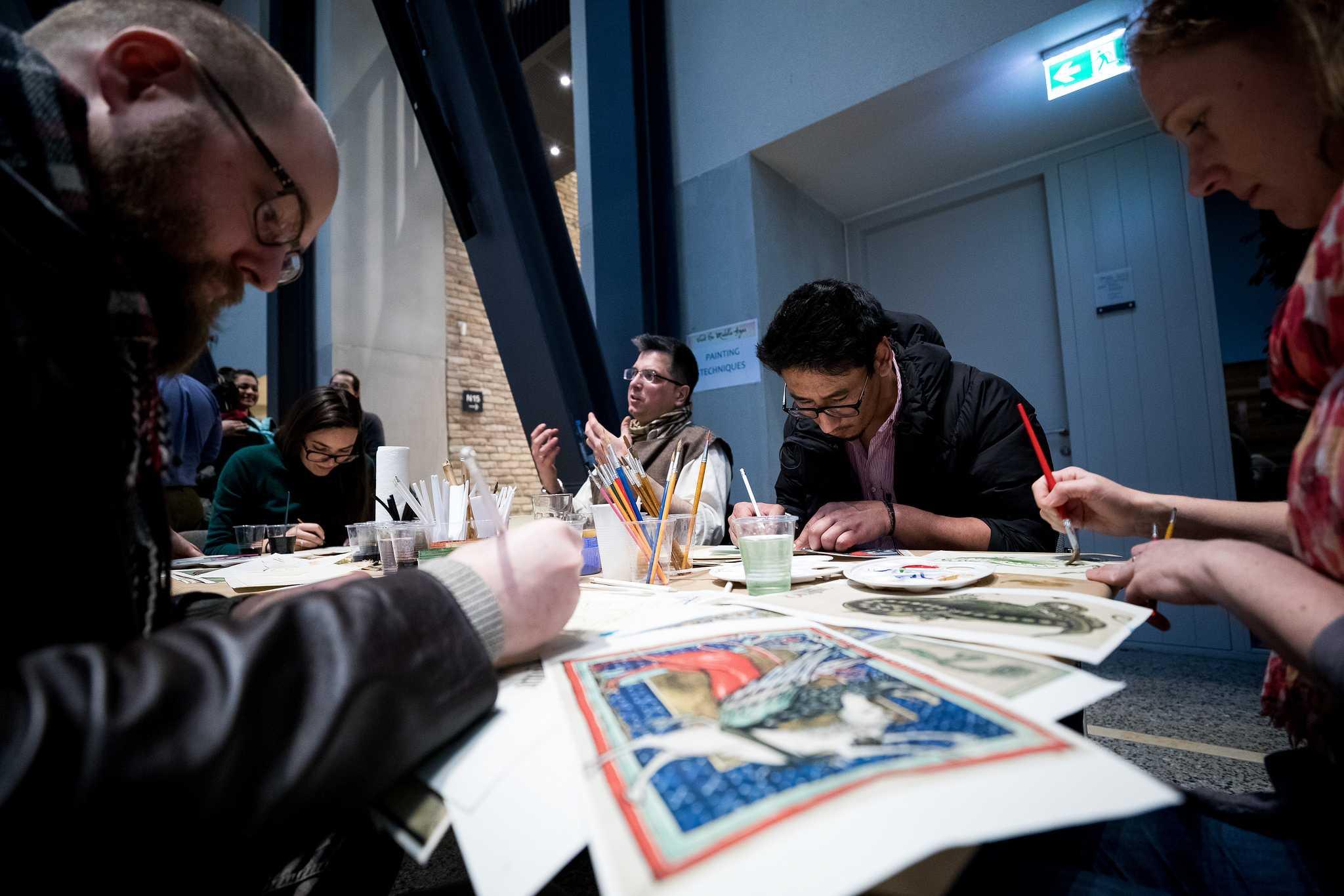 Guests were able to see and touch medieval archaeological finds from potsherds and animal skulls to parchment, see how paint was made and used, and try their hand in reading manuscripts. Curious visitors were also invited to explore medieval maps and draw a sketch of their own hometown using medieval concepts of geography. The research-based demonstration of ancient methods of diagnosing illnesses and reconstructed medieval clothing were particularly popular among visitors of all ages. The event also housed a pop-up exhibition of architectural designs created to preserve and display a medieval Cistercian glass production workshop in Pomáz, designed by students of Moholy Nagy University of Art and Design. A poster exhibition offered a glimpse into the Department's annual academic field trips, and publications by Medieval Studies alumni were also for sale. 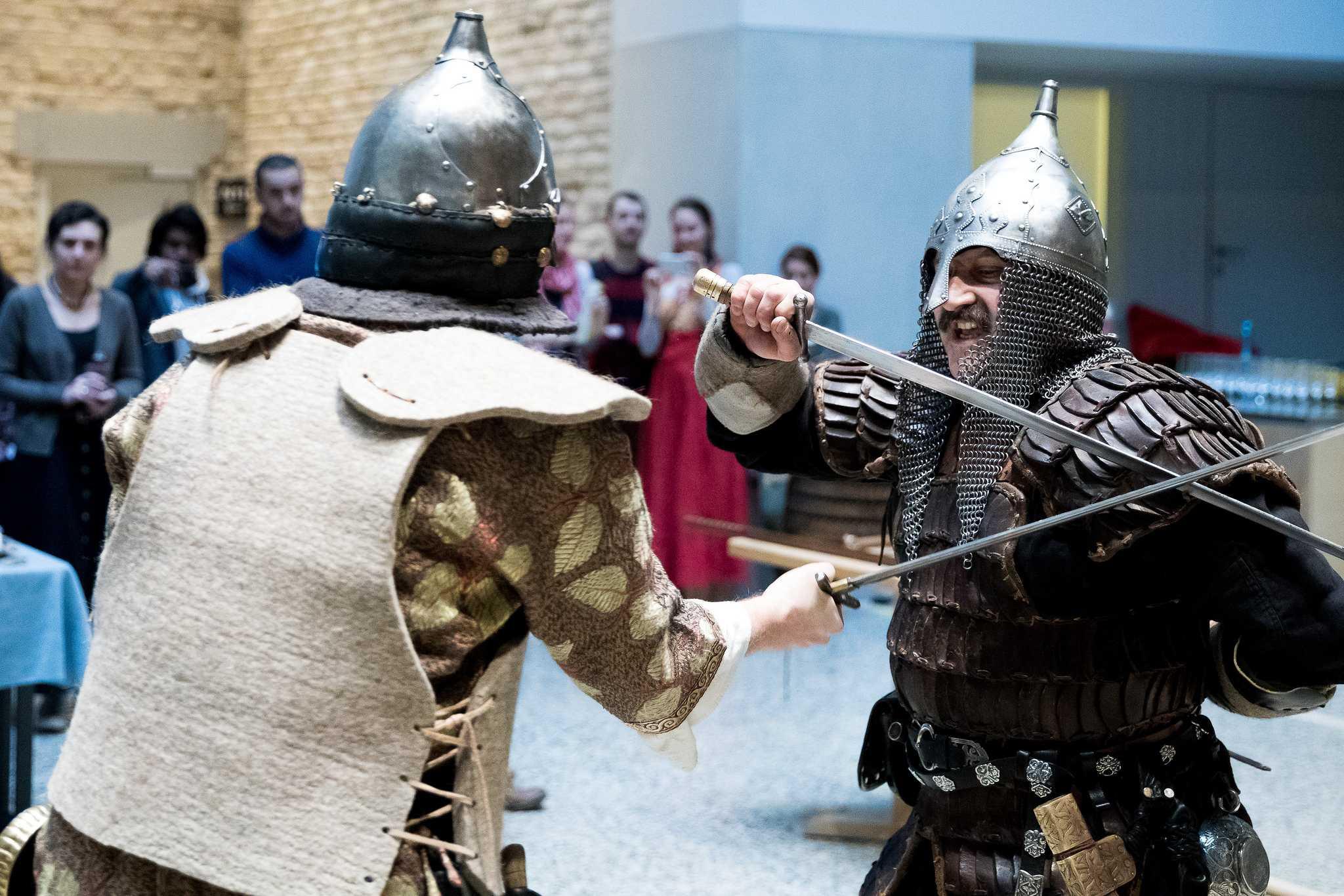 Members of the Golden Sabre Fencing School, including historian Csaba Hidan, PhD, specializing in 11th- to 14th-century Hungarian weaponry, presented medieval nomadic warfare in a dynamic re-enactment show performed in authentic arms and armor of leather and felt. This spectacle of sabres, battle axes, and lances in action captured the imagination of many of the spectators and drew a crowd to the halls of CEU's ultra-modern Nador 13 building. 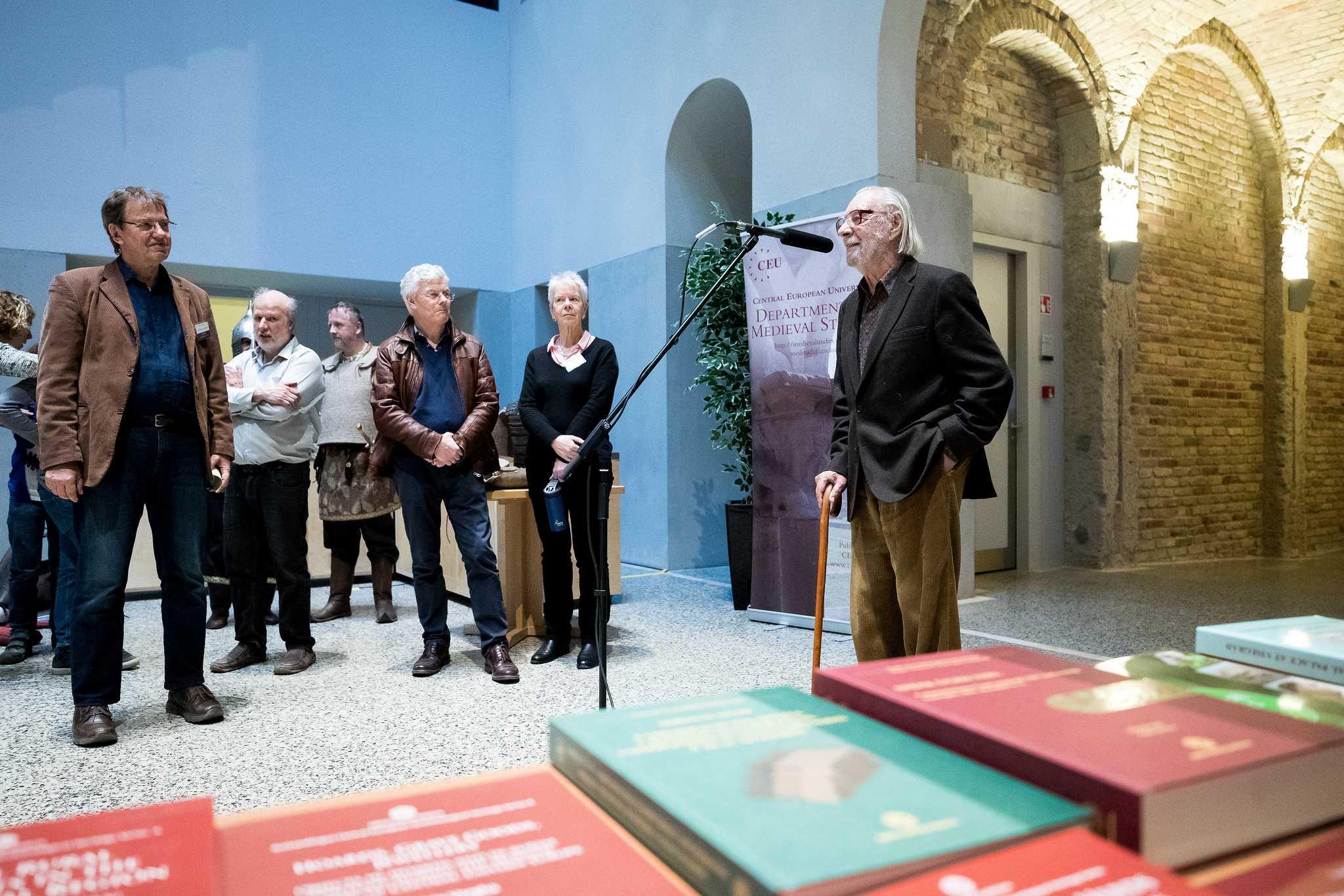 Professor Emeritus Janos M. Bak and University Professor Gabor Klaniczay, founding faculty of the Department, welcomed the crowd with poignant remarks about the past, present and future of medieval studies at CEU and Hungary. Department head Katalin Szende also welcomed visitors to the colorful walk down memory lane. Helping them was Josip Banic, current PhD student, who also said a few words representing the student body. The formal part of the celebration was followed by a small reception, and, of course, a birthday cake adorned with the Department's much-loved unicorn. 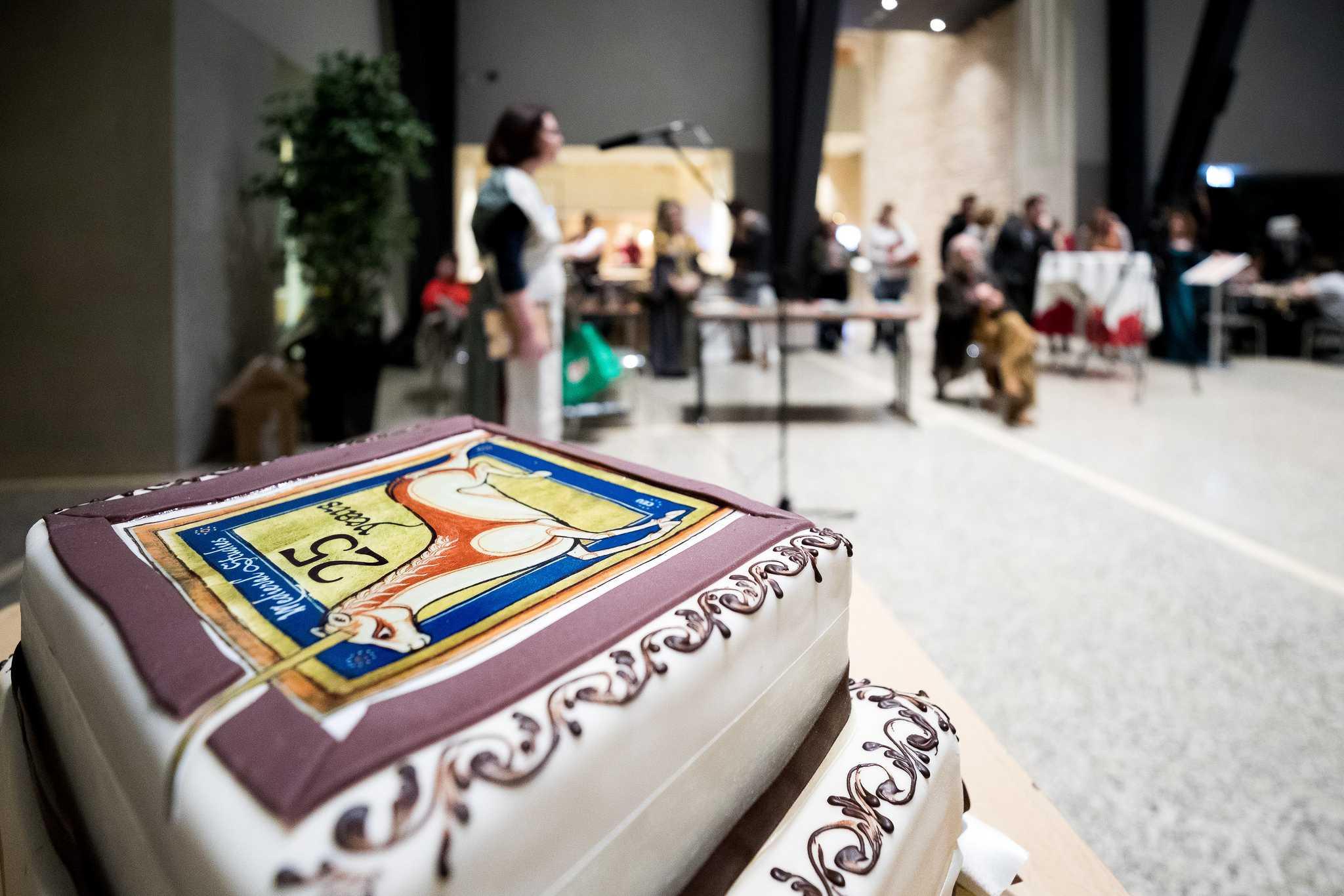 Topping the celebration was a concert in which violinist Anna Kinde, a current MA student, and her ethno-folk-rock band Sarkanykonny (Dragon Tear) brought danceable beats straight from the Middle Ages. Drawing inspiration from medieval music, the seven musicians provided toe-tapping rhythms to conclude an afternoon of medieval scholarship and fun.

Thank you to everyone who contributed to this wonderful event, and also to all our guests who joined us in celebration.