From Prejudice to Love: How Much Love Is Needed to Combat Hate Speech?

According to Rector and President of Central European University Michael Ignatieff, “we are a generation that has had the misfortune of coming to maturity in a world that is full of hate,” meaning a high degree of intolerance towards other races, religions, sexualities, genders and nationalities. 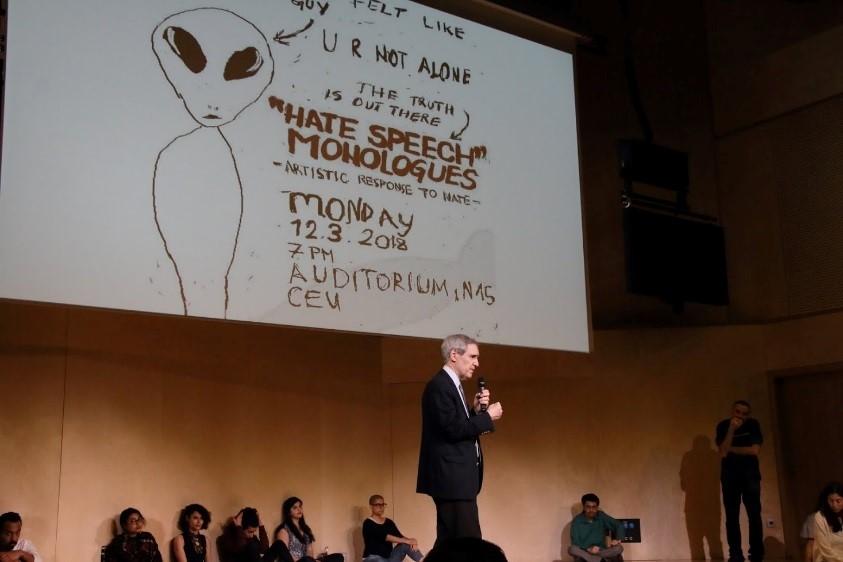 Karl Popper, who first described the concept of the Open Society in his book “The Open Society and Its Enemies,” claimed that “we should claim, in the name of tolerance, the right not to tolerate the intolerant.” In this sense – “Hate Speech” would need to be combated, at least at the level of CEU and Open Society Communities. But how to combat hate and not to multiply it? The answer comes from the founder and director of “Hate Speech Monologues” – Peter Molnar, free speech scholar and performer at CEU.

Peter gathers the CEU student performers from across the globe who could share the stage of Central European University with a performance of their personal stories Peter asks the performers to look no further for inspiration than their own encounters with prejudice in their lives. Some of them are seasoned poets, while others had never written creatively in English before. 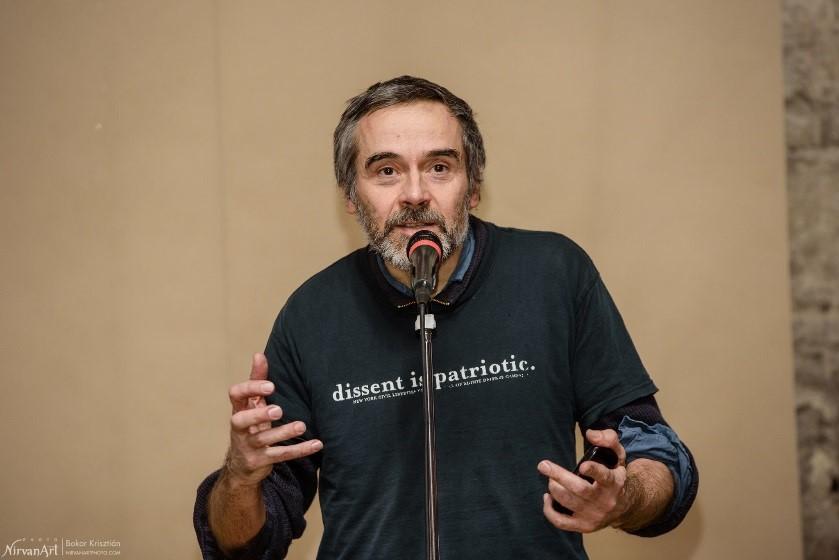 Peter invented the “Hate Speech Monologues” in 2012 and in the past six years he arranged and directed 12 performances.  When asked about the roots of the idea, Peter says that working on artistic responses to hate speech, including slam poetry and participatory theater, is his passion.  He created the “Hate Speech” Monologues in his course in CEU’s Department of Public Policy as an option for students to experiment with real life responses to real life examples of hate speech which was part of the course work.

The latest performance of CEU students was entitled “From Prejudice to Love: ‘Hate Speech’ Monologues.” We asked a few participants to share their impressions:

For Jelena Savic from Serbia (Department of Philosophy, CEU), it was a place where she could meet “many new and interesting people, with whom we share similar experiences, so that it makes us kind of a community.” Jelena had already participated a few times and even designed the latest poster of the event. She thinks that “giving a monologue is a good and alternative way of self-expression. Some people share their story for the first time and its empowering! l feel that this is something important for academia - to have a space where you are open about your emotions and not to focus only on your brain. You can learn so many different things from others - for example different approaches to artistic expressions of your experience and how people can be discriminated against in general.” 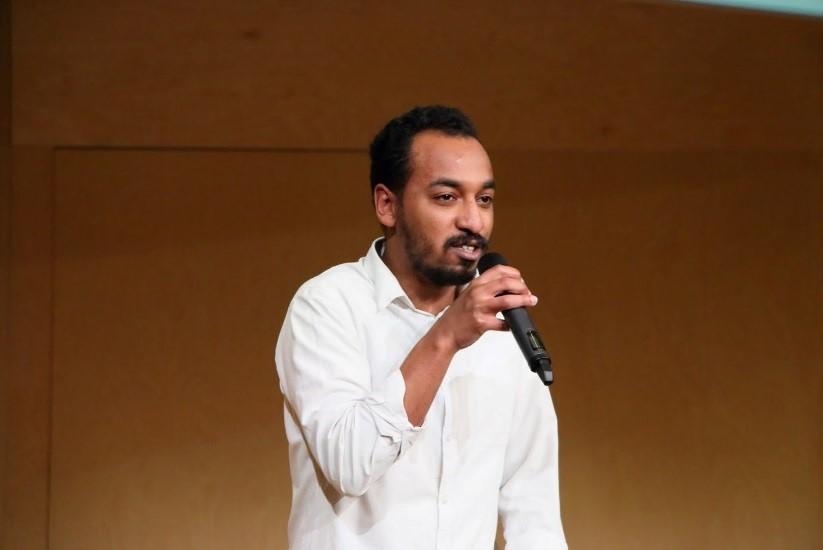 For Mohamed Aly Talibab from Egypt (Department of Business and Economics, CEU) - “it felt liberating - to say the least. Being able to share what goes through my mind has helped me to not feel alone.” Aly shared that he learnt to be more compassionate, even though he thought of himself as open-minded and that “it is always scary how narrow-minded we actually really are!” For him being part of the “Hate Speech” Monologues – was the way to keep his own hypocrisy in check.

Nirjhar Mukherjee from India (Department of Political Science, CEU) thinks that hate speech is part and parcel of an intolerant society, but a simple smile “often belies a thousand scars.” Participation in the “Hate Speech” Monologues provided him with “an excellent opportunity to talk and discuss the use of the hate speech.” Nirjhar says the performance gives a chance “to witness the inspiring stories of fellow survivors who have bravely stood up to injustice in various ways” and to connect with one another “to speak our mind publicly and unite in resistance.” 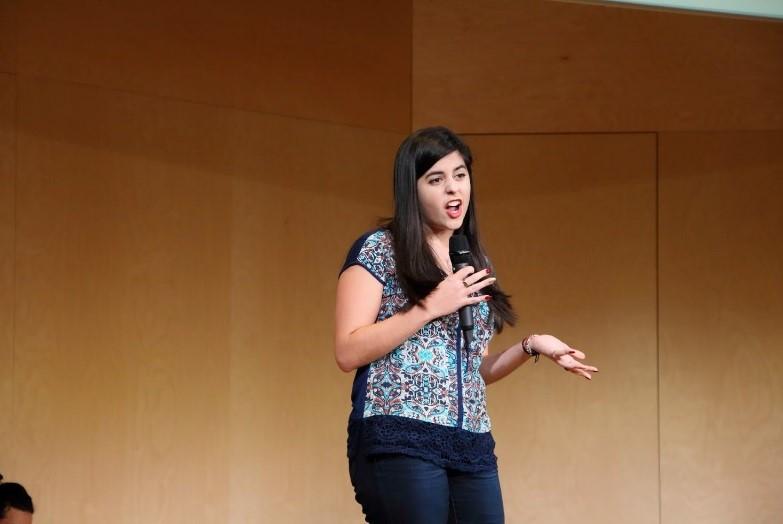 Valeri Garcia from the University of Alberta performs at the Hate Speech Monologues at CEU. Photo: Peter Favics

Valeri Garcia from Canada (The University of Alberta) had a really positive experience participating: “I was nervous coming in and participating as an outsider since I am not a CEU student, but I felt very welcome at every step of the way. I enjoyed getting to know other people and their stories. It was powerful to have the stage to talk about experiences I have had and to feel like they were worthy of telling and that what I felt in those situations was valid. Even though it was quite a vulnerable position to be in it was amazing to feel the support of the other performers and know that it was a safe space.” 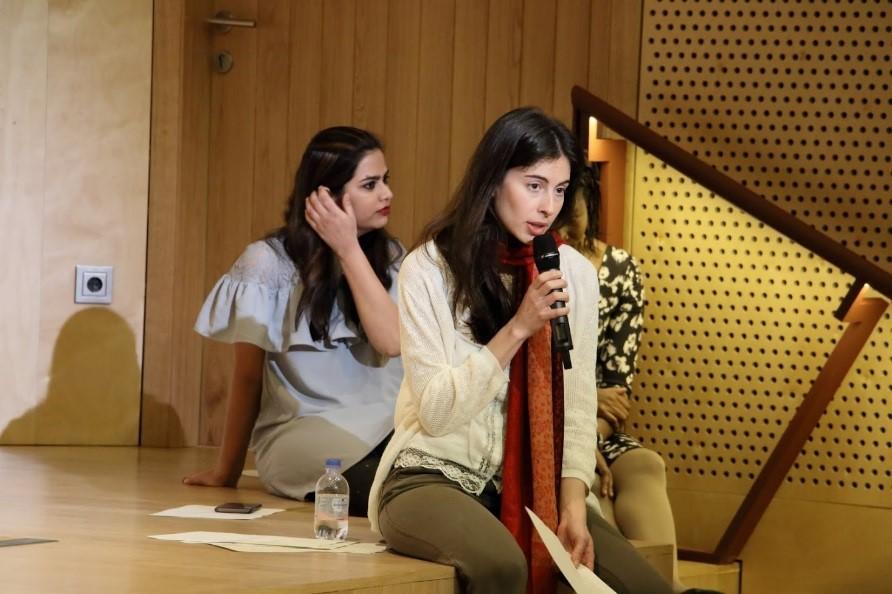 The Hate Speech Monologues performance provided me a space and connected me to a community that enabled me to speak out, says CEU doctoral student Asli Karaca. Photo: Peter Favics

For Asli Karaca (Doctoral School of Political Science, Public Policy and International Relations, CEU) – it was a “life-changing experience. As a person who is quite introvert, the performance has provided me a space and connected me to a community that enabled me to speak out.” Asli writes poetry about the injustices she experienced and witnessed and now gained confidence in sharing them with the audience that “has been eager to listen.” For her it is important “to not to hide, for example, when you are lucky to have survived an abusive relationship in the past, or when you are only a witness of the injustices in your hometown – if you are not the target of hate speech as a member of the majority.”

The key message of the “Hate Speech Monologues” this year and the future is that more stories are wanted from all of you! Peter hopes to help all participants to find a way to share their experiences in the performance. “We offer a participatory platform for all - and especially for those who have been targeted by hate speech.”