June 14, 2018
#IstandwithCEU
News
Awards and Distinctions
Building Maintenance Group
The Office of the President and Rector
Campus Redevelopment Office
The Office for Hungarian Affairs
The Office of the Pro-Rector for Research and Faculty
Communications, Marketing & Outreach Office

In recognition of the University's communications campaigns in response to the attack on its academic freedom, CEU has been awarded the Council of Advancement and Support of Education (CASE) Circle of Excellence Gold Award in the Crisis Communications category. CASE, founded in 1974, is a membership association serving educational institutions and the advancement professionals who work on their behalf in alumni relations, communications, development, marketing and allied areas. The Circle of Excellence Awards program recognizes outstanding work in advancement services, alumni relations, communications, fundraising and marketing at CASE member institutions worldwide. They are judged by peer professionals at schools, colleges and universities as well as by professionals from outside education.

Judges recognized the swiftness of CEU's leadership and individual units in responding to the threat through frequent press releases and press conferences in both English and Hungarian. They also noted the extremely effective social media campaign, centered around the hashtags “istandwithCEU/aCEUvalvagyok.” Gaining support from academics the world over, including more than two dozen Nobel Prize laureates, the president of Germany, the presidents of Harvard, Princeton, Yale, Oxford, the president of the Hungarian Academy of Sciences and thousands of researchers and professional organizations worldwide also impressed judges. 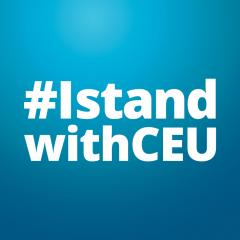 There were 15 entries in the Issues and Crisis Management category, with CEU taking gold and the University of Virginia taking silver for their campaign “Standing Up for Charlottesville,” following the deadly white supremacist rally on their campus in August 2017.

More on the CASE Circle of Excellence Awards here.