June 22, 2018
News
Videos
The Office of the President and Rector

Today at Central European University's 27th graduation ceremony, 693 students from 100 countries received master's, doctoral degrees and non-degree certificates at Budapest's Palace of Arts (MUPA). The University also awarded the Open Society Prize to celebrated Hungarian economist Janos Kornai for his pioneering economic analysis that laid bare the destructive irrationality of “closed societies” of the communist type and for his important contributions to the economic canon.

“This is a day of affirmation. For more than a year now, CEU has stood for academic freedom – not just for itself, but for all Hungarian institutions of learning and research,” CEU President and Rector Michael Ignatieff said as he opened the ceremony. “This freedom – to teach, to research, to learn – is not the privilege of an entitled few; it is the mainstay of democracy for the many.” 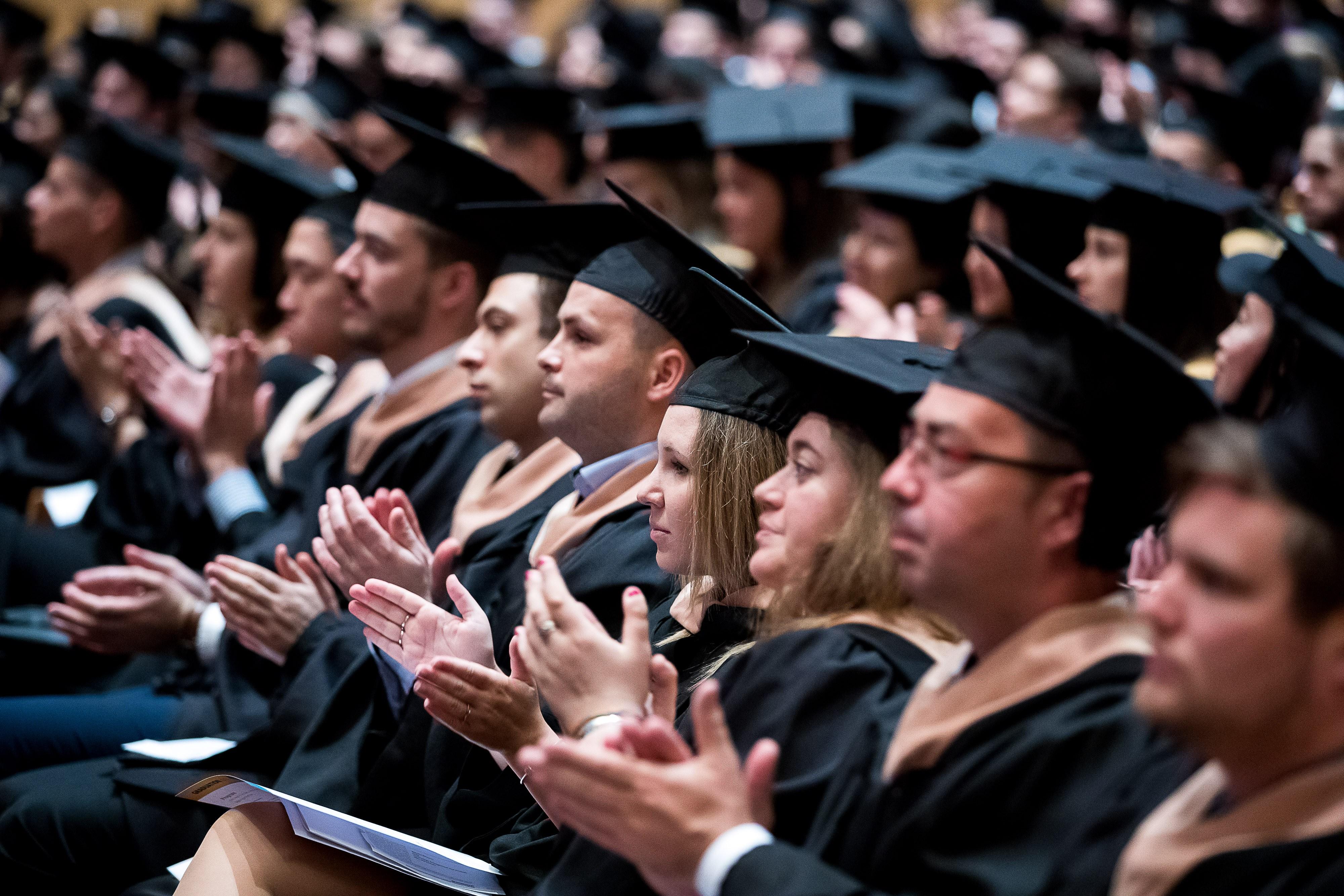 Although the University has been under attack for more than a year, CEU Provost and Pro-Rector Liviu Matei emphasized the strength and unity CEU has shown during this trying time.

“This academic year has been a special one and particularly difficult for CEU. And yet, today we come together, as members of a free academic community, to celebrate the achievements of our graduating students, as we have done for the last 26 years and will continue without interruption for years to come,” said Matei. “Each one of these students represents a story of commitment, perseverance, dedication and achievement.”

CEU Trustee and Chancellor of the University of California, Berkeley Carol Christ spoke directly to the graduating class and underscored the special character of CEU and the importance of its open society mission.

“I speak for all the trustees in saying how deeply moving this ceremony is,” said Christ. “You come together representing 100 countries at time when nationalism is resurging and more and more countries are building fences. You speak for the importance of an international community in the pursuit of knowledge. The board members find the very idea of this university inspiring – as a place that can foster the disciplines that make democracy thrive. Thank you for your fidelity to this vision.”

CEU alumna Natalia Szczucka (SOCI '06), head of the EU Commission Regional Representation in Wroclaw, shared her story of volunteering that ultimately led to her impressive career. She stressed that volunteering is not only beneficial for society, but also as a way to gain experience and to find what career best suits you. “Be an active citizen,” she said. “This is how you can make a difference. The world needs you. Now go out and make it a better place. We can do it together.”

Student speaker Enna Gerin (NATI '18) credited the Geneva Convention for her very existence and for giving her and her family protection in Sweden in the early 1990s.

“I was born 30 years ago in Bosnia-Herzegovina, at the same time the idea of CEU was born. The CEU founders anticipated rightfully that the transitions of regimes cannot be taken lightly," Gerin said. "I was a child stuck in another European history – in the bloody, nationalist wars in the Balkans at the end of the 21st century. I entered Sweden in 1993 as a refugee with my parents and we were swiftly granted protection and permanent residency. At times like these, I believe it's more important than ever to focus on thinking bigger and ever greater about what open society, human rights and equality can be. I think our years at CEU have equipped us well for these tests.”

Those students who will be carrying their CEU experience with them as they enter the next chapter of their lives include over 600 MA students, 52 PhD students, 14 Roma Graduate Preparation (RGPP) and 8 students from CEU's Open Learning Initiative (OLIve UP) program. CEU has pioneered higher education programs for both talented Roma students and registered refugees in the Central/Eastern European region.

Honoring a CEU tradition since the early 1990s, the program concluded with the conferral of the Open Society Prize. Recipient Janos Kornai is the author of key works in the field of economics, including “Overcentralization” and “Economics of Shortage.” Ignatieff praised Kornai's “The Road to Economic Freedom,” noting that the volume proposed a humane and just path toward market economy for the countries that transitioned beginning in 1989. Kornai took the opportunity to declare his solidarity with both CEU and the Hungarian Academy of Sciences as he accepted his award and he expressed his wish that foreign students who are headed home will take back a balanced view of Hungary, “of what is decent and beautiful” in this nation. 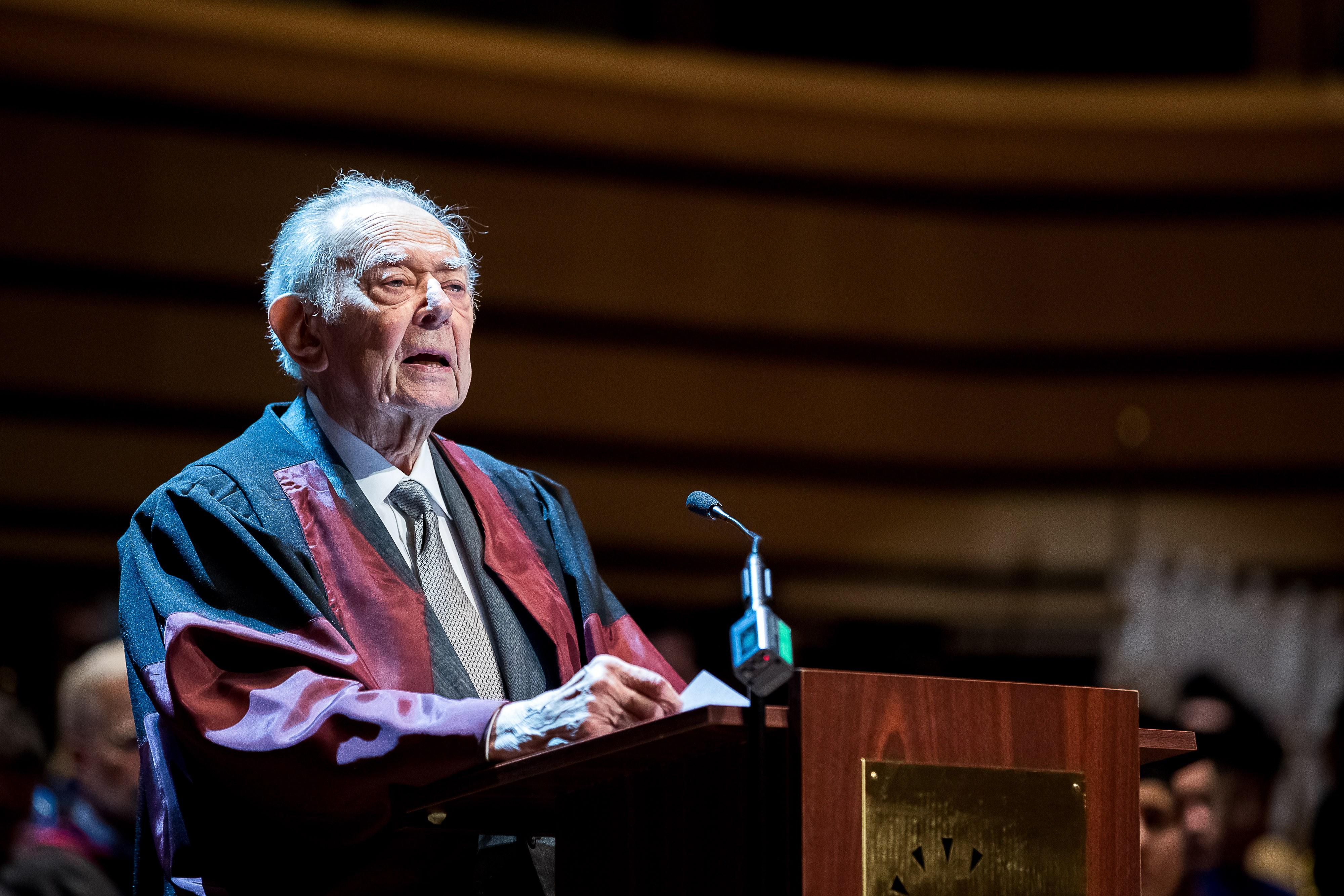 “I hope you spread the word about the many Hungarians who fight for human rights and democracy,” Kornai said. “We badly need Karl Popper's encouragement to spread the message of open society. Observe the world as it is: open!”