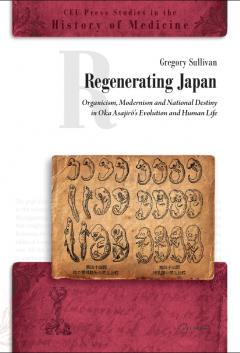 As the first step toward a comprehensive reinterpretation of the role of evolutionary science and biomedicine in pre-1945 Japan, the new volume in the CEU Press Studies in the History of Medicine series addresses the early writings of that era’s most influential exponent of shinkaron (evolutionism), the German-educated research zoologist and popularizer of biomedicine, Oka Asajiro (1868–1944). Concentrating on essays that Oka published in the years during and after the Russo-Japanese War (1904–5), the author, Gregory Sullivan describes the process by which Oka came to articulate a programmatic modernist vision of national regeneration that would prove integral to the ideological climate in Japan during the first half of the twentieth century. In contrast to other scholars who insist that Oka was merely a rationalist enlightener bent on undermining state Shinto orthodoxy, Gregory Sullivan maintains that Oka used notions from evolutionary biology of organic individuality—especially that of the nation as a super-organism—to underwrite the social and geopolitical aims of the Meiji state.

“This remarkable book contributes not only to our understanding of the unique ideological ethos of Japan’s militaristic regime, but to several research areas beyond Japanese studies: eugenics, modernity, modernism, totalitarianism, and comparative fascism," Roger Griffin, professor in Modern History at Oxford Brookes University praised the volume.

For more information about the CEU Press Studies in the History of Medicine series, see http://ceupress.com/series/ceu-press-studies-history-medicine