When making decisions about how to complete a joint task as part of a two-person team, do individuals tend to act in ways that benefit themselves, their teammate or the team as a whole? The question underlies the new study “Rationality in Joint Action: Maximizing Coefficiency in Coordination” published in Psychological Science by researchers in Central European University’s Department of Cognitive Science.

“We already know from previous research that a person tends to help their partner when they are in a social interaction because they have a shared goal. But prior to our study, there was no research about the reason behind why people act this way and whether they tend to make rational decisions about how to work together,” said Georgina Torok, a PhD candidate in the department’s Social Mind and Body Group and lead author of the study. “Are they trying to reduce their partner’s action costs, such as the invested physical effort or time, because they are selfless? Or are they acting rationally and efficiently by trying to reduce the overall action costs shared between both partners?”

This question becomes relevant in a variety of everyday coordination contexts. For example, when we try to arrange a date with someone in a park full of benches or in a bustling city center with plenty of potential meeting points. Would you pick a bench or a café that is the closest to you or closest to your date? Or, alternatively, would you choose a location that minimizes the total time it takes both of you to reach the bench or a café—even if this last option requires some extra legwork from one of you?

To answer this question, the researchers designed a cooperative two-person game played on a touch screen. The goal of the game was to drag a football as quickly and smoothly as possible from one end of the screen to the other end in two movements, with each player making exactly one movement. Obstacles on the football field impacted the length of each player’s individual movement and the overall length of the two movements combined. These obstacles forced the first player to decide whether to minimize her own effort, to minimize her partner’s effort or to minimize the pair’s combined efforts. 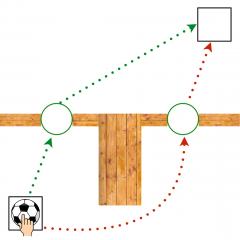 “We found that, when there was asymmetry in terms of total path length, people chose to perform the movement that would be most efficient for the group. By an overwhelming percentage, the first person selected the ‘right answer’—they chose a shorter or a longer path when that path benefited the group,” explained Torok.

The results suggest that people do seem to care about combined group costs, not just the costs to themselves or their partners.

“The conclusion we can draw is that, when you are cooperating with someone in a simple task, you take into account the costs of actions to the group and try to minimize that as best as you can. You are not always selfish or overly polite, but truly cooperative,” said Torok.