U.S. ambassador David B. Cornstein and Dutch ambassador Rene van Hell made a special appearance at iLab’s first Innovation Breakfast of the new academic year. The Breakfast – a fixture on Budapest’s startup calendar--also featured a panel of established and emerging startups, mentors and advisors.

The ambassadors shared accounts of the importance of risk-taking in building a business and also delved into the role of governments in enabling and fostering innovation.

President and Rector Michael Ignatieff welcomed the guests, stressing that even as CEU is opening a new campus in Vienna, the University will always maintain a strong, vigorous presence in Budapest: “our home, a city we love, a city we care about. Our facilities will be available for innovators, incubators, for business partnerships of all kinds.” 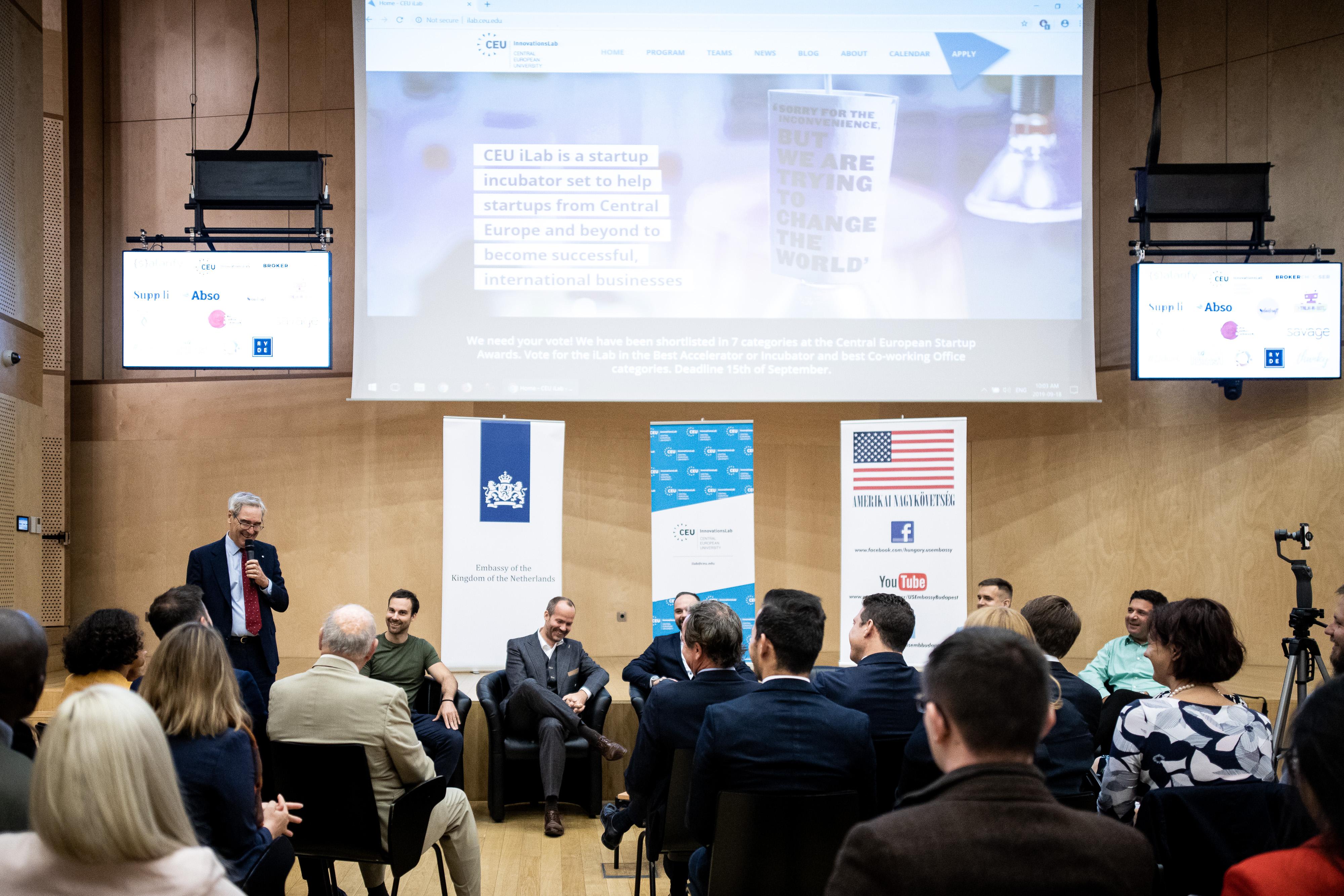 “We at CEU think that you cannot have an open society unless you have incubators, innovators, disruptors, people thinking about how you can think about doing things in a completely different way” Ignatieff said, adding that CEU will always be a home for “free spirits, free hearts, free souls.”

In his opening remarks Ambassador van Hell emphasized the great diplomatic and business relations between his country and the United States , which was also expressed in the two countries co-hosting this year’s Global Entrepreneurship Summit, annually held since 2010.
“Companies are for making profit and governments are for setting policy but it is the interaction of the two where beautiful things can happen and that is what my government aims to do.”

According to the Dutch ambassador, a market economy often does not deliver the things that today’s modern societies need – solutions for social injustice, inequality, climate change. “Whose responsibility is it to deal with this – the companies or the government?”

Pointing out that of the main roles of government is to create an environment in which companies can flourish, he also admitted that this can be a challenge:. the Netherlands is, for example, committed to carbon neutrality but also wants more economic growth. “We set a goal to de-couple carbon emissions from economic growth.”

Following the ambassador’s remarks, iLab Director Andrea Kozma introduced a panel of of innovators who spoke about the specific challenges they faced and how they overcame them. 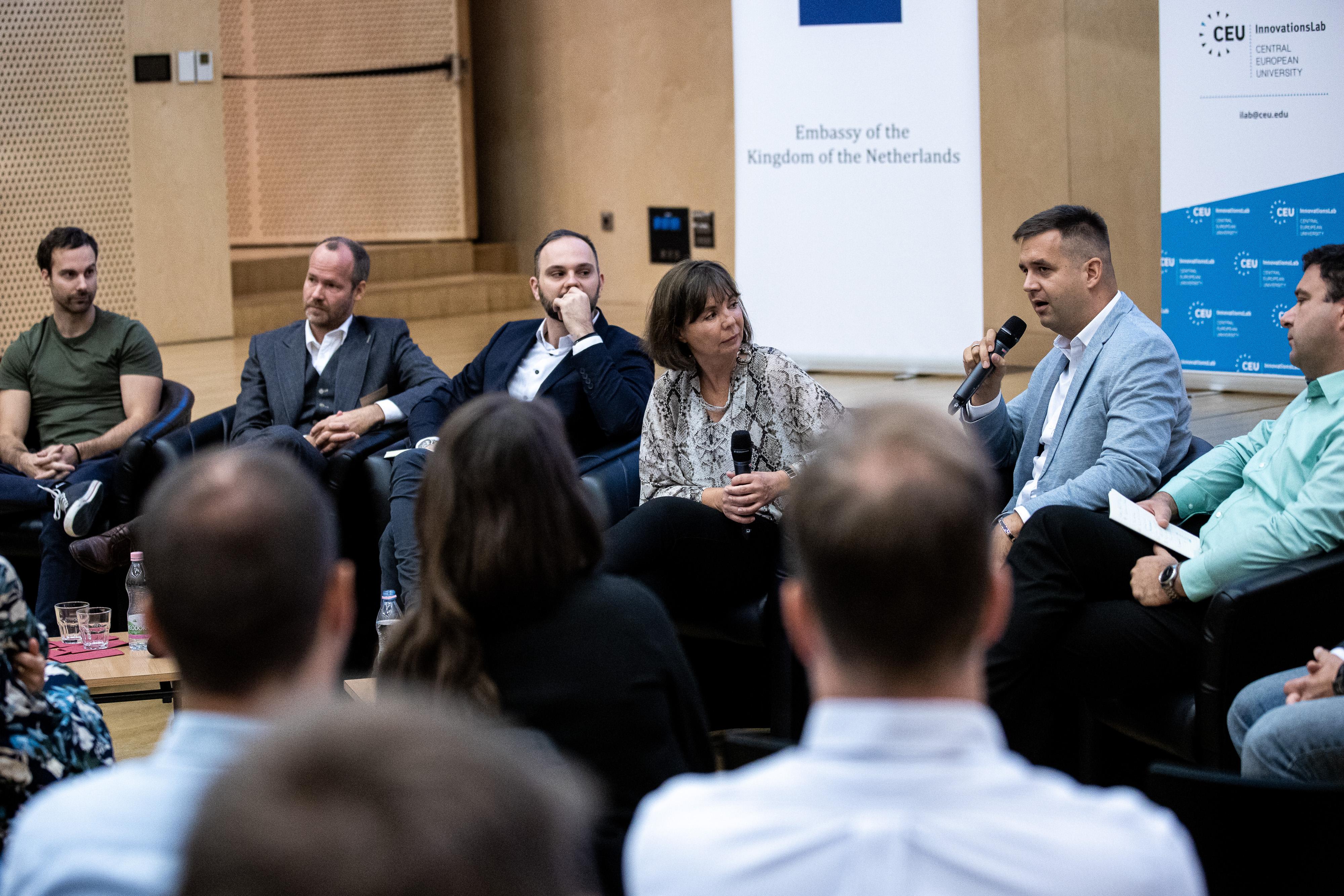 Paolo Petrolini of Salarify explained that they set out to create a platform that allows employees to access the salary they already earned, without having to wait for the next payday. The main obstacle in their case was the fact that salaries are a sensitive issue and needs a lot of trust from the customers.

The TailorNetwork offers premium quality suits produced by tailors in underprivileged, rural areas. “Many people struggled with the concept of premium quality that is socially produced” said founder Michael Bist. When customers were shown the product, they no longer doubted the quality, and a few “early ambassadors” who believed in the project also helped overcome these obstacles.

Tamás Nagy of Absorice explained how his company used customer feedback to reformulate their original product, vegan protein powders and bars: “this is such a fast-changing industry that we need to innovate constantly.”

Brokerchooser’s Tibor Bedo talked of his company allowing retail investors to compare the prices and quality of stockbrokers globally. “We are having an impact, we are bringing competition into the market. And we do this from Nador 9., which means that it is possible to have a global reach from CEU” Bedo said.

Laszlo Papp of Talk-A-Bot made the point that in order to take a business to the next level, “sometimes you need to change your way of thinking!” Talk-A-Bot is the market leading chatbot provider in Hungary today, but in becoming so, the young disruptor realized that his startup is no longer in the business of chatbots – but in a far wider area: communication automation. 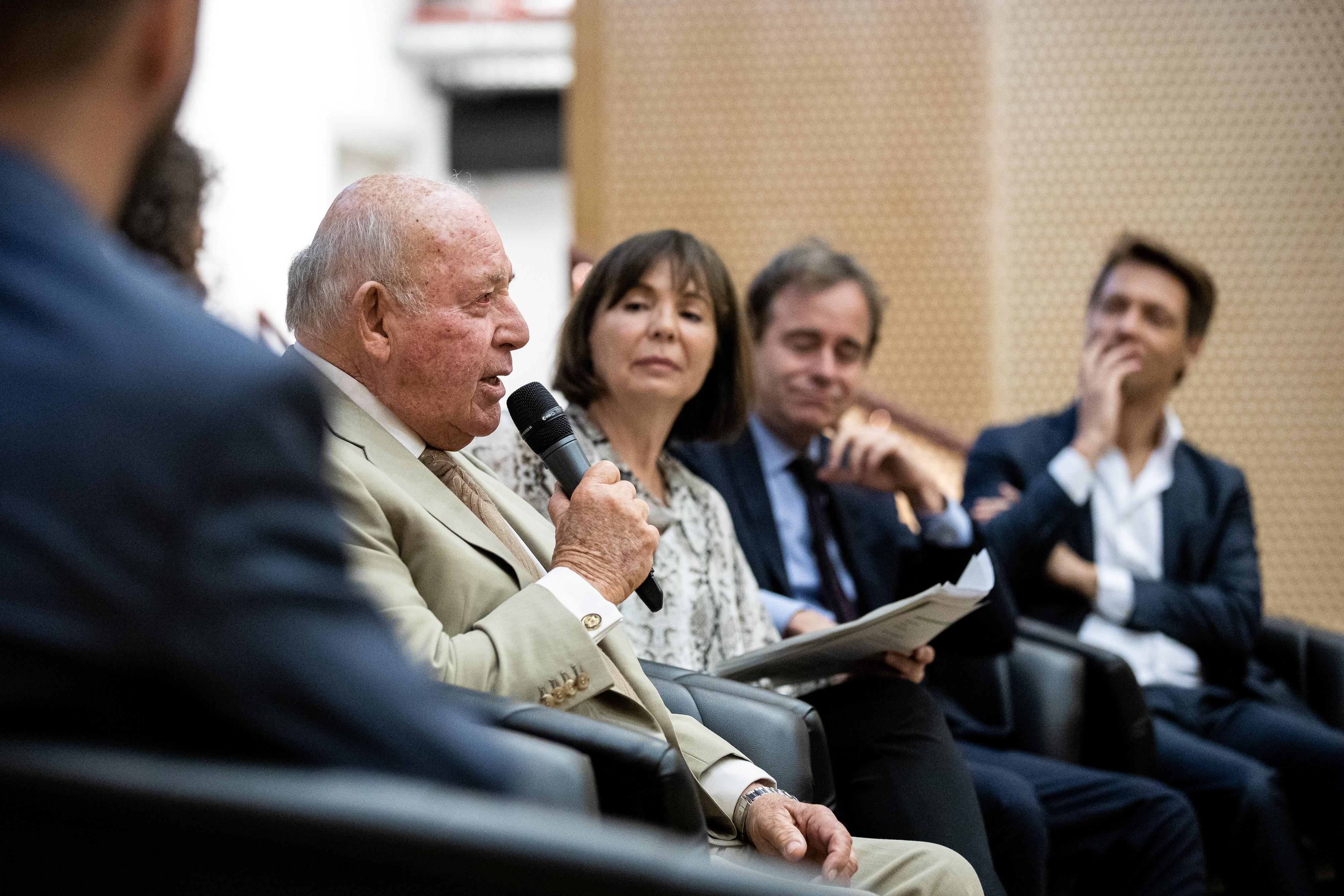 Ambassador Cornstein began by recalling how he started out in the jewelry business in the United States in the 1960s. For an entrepreneur, one of the most crucial elements in starting up a business is having financing in place: Ambassador Cornstein’s parents gave him the money for his first store, but after that, he had to figure out financing himself.

The Ambassador also spoke about the importance of taking risks: a few years into the business, he was offered a new partnership deal which meant that he was either about to lose his existing business or to take it to a whole new level. It was worth taking the risk – his business boomed. 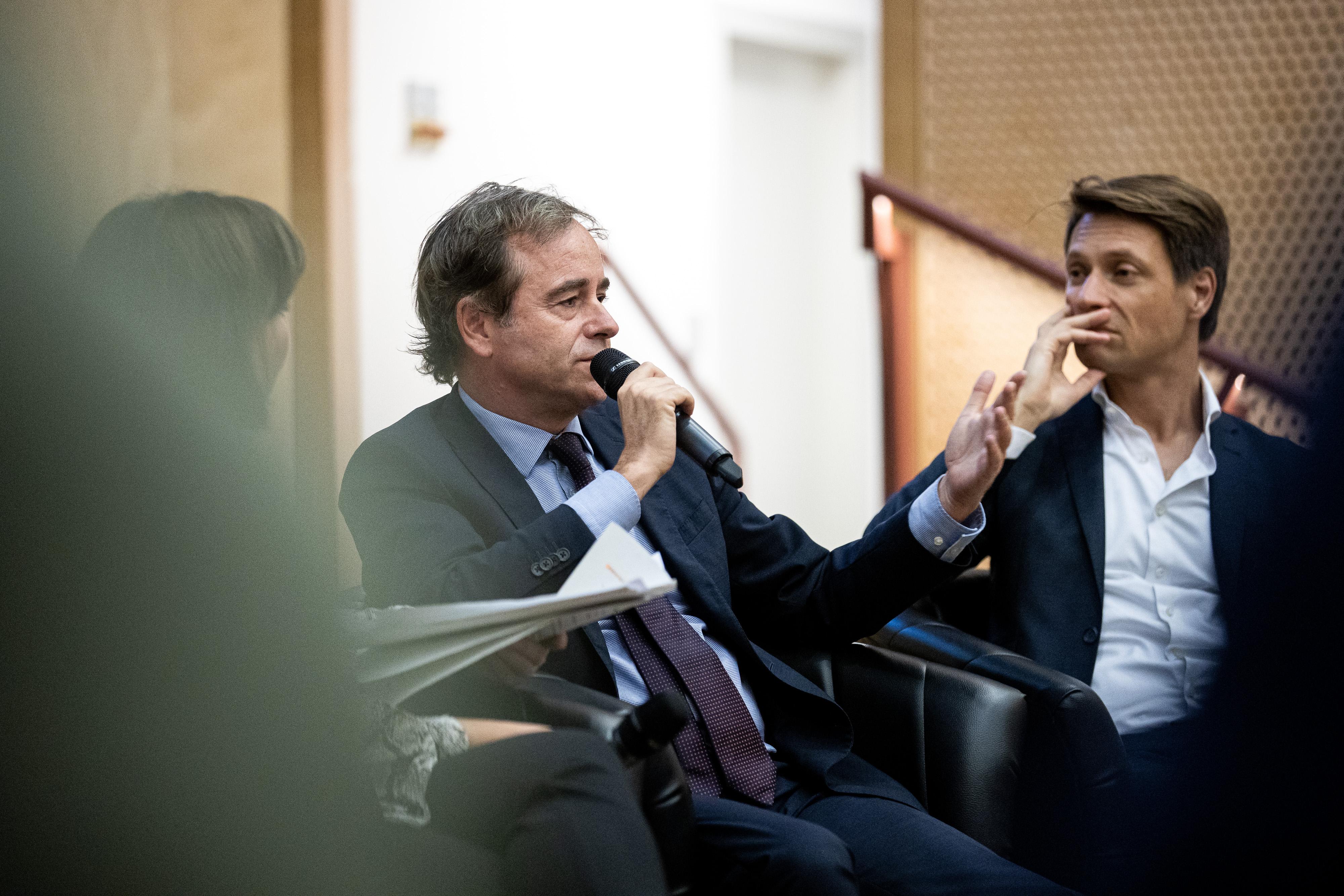 Following Cornstein, Rene van Hell went on to talk about the government’s role in the economy. To illustrate his point, he mentioned how in the Netherlands in the ‘80s competition was suppressed by cartels, and that in itself suppressed innovation. This was the area in which he worked prior to becoming a diplomat: he was in the ministry of economy working on public procurement, fraud and cartels. He also worked on the question of how the government can help Dutch companies do more business abroad.

Rene van Hell added that as well as governments easing the bureaucratic burden of starting a new business and central banks and finance ministries supporting new enterprises, one more thing can be done to promote innovation: teaching students in business schools that being an entrepreneur is actually fun.