Women and Power in Byzantium: Piroska and the Pantokrator Published by CEU Press

A thirty-minute walk from the Galata Bridge, the Zeyrek Mosque is one of the largest Byzantine edifices in today’s Istanbul. Its history is told in one of the latest releases of CEU Press. The volume, with the intriguing title Piroska and the Pantokrator, was edited by Marianne Sághy, professor of the CEU Department of Medieval Studies in conjunction with Robert G. Ousterhout of the University of Pennsylvania.

Piroska (baptized as Prisca), born in 1088, was the daughter of Saint Ladislas, king of Hungary. The young princess married the Byzantine crown prince John Komnenos, and with the religion, she took up the Eastern orthodox name of Eirene.

As empress and later imperial widow, she lived a pious life, which was crowned by founding the Monastery of Christ Pantokrator – today’s Zeyrek Mosque. 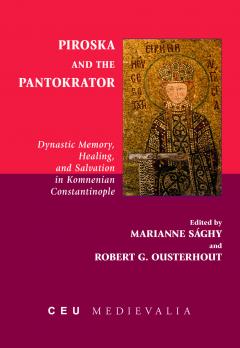 In Piroska and the Pantokrator, published in September, leading scholars of Byzantium explore “dynastic memory, healing and salvation in Komnenian Constantinople” (the subtitle of the volume).

Professor Sághy did not live to see the printed book, she passed away in September 2018. A year later, at the time of launching the volume, a conference was dedicated to her memory in Budapest.

Christ Pantokrator, the imposing monumental complex founded in 1118, is now called the Zeyrek Mosque. It is the second largest Byzantine religious edifice after Hagia Sophia still standing in Istanbul and it represents the most remarkable architectural and the most ambitious social project of the Komnenian dynasty.

The book approaches the Pantokrator from a special perspective, focusing on its co-founder, Piroska. This particular vantage point enables its authors to explore not only the architecture, the monastic and medical functions of the complex, but also Hungarian-Byzantine relations, the cultural and religious history of early medieval Hungary, imperial representation, personal faith and dynastic holiness.

Piroska's wedding with John Komnenos came to be perceived as a union of East and West. The life of the Empress, a "sainted ruler," and her memory in early Árpádian Hungary and Komnenian Byzantium are discussed in the context of women and power, monastic foundations, architectural innovations, and spiritual models.

Link:
In memoriam Marianne Saghy
Piroska and the Pantokrator at CEU Press