November 17, 2019
News
CEU Vienna Campus
The Office of the President and Rector

Less than a year after announcing it was forced to move its U.S. degree teaching, Central European University (CEU) officially inaugurated its new campus in Vienna.

At a ceremony that highlighted the importance of academic freedom, diversity, free inquiry and open societies, President and Rector Michael Ignatieff welcomed the nearly one thousand guests at Vienna’s Expedithalle. Hailing the inauguration as a “momentous day”, Rector Ignatieff thanked the city of Vienna for the warm welcome: “Our doors will always be open to you: CEU never was and never will be an ivory tower” he said. 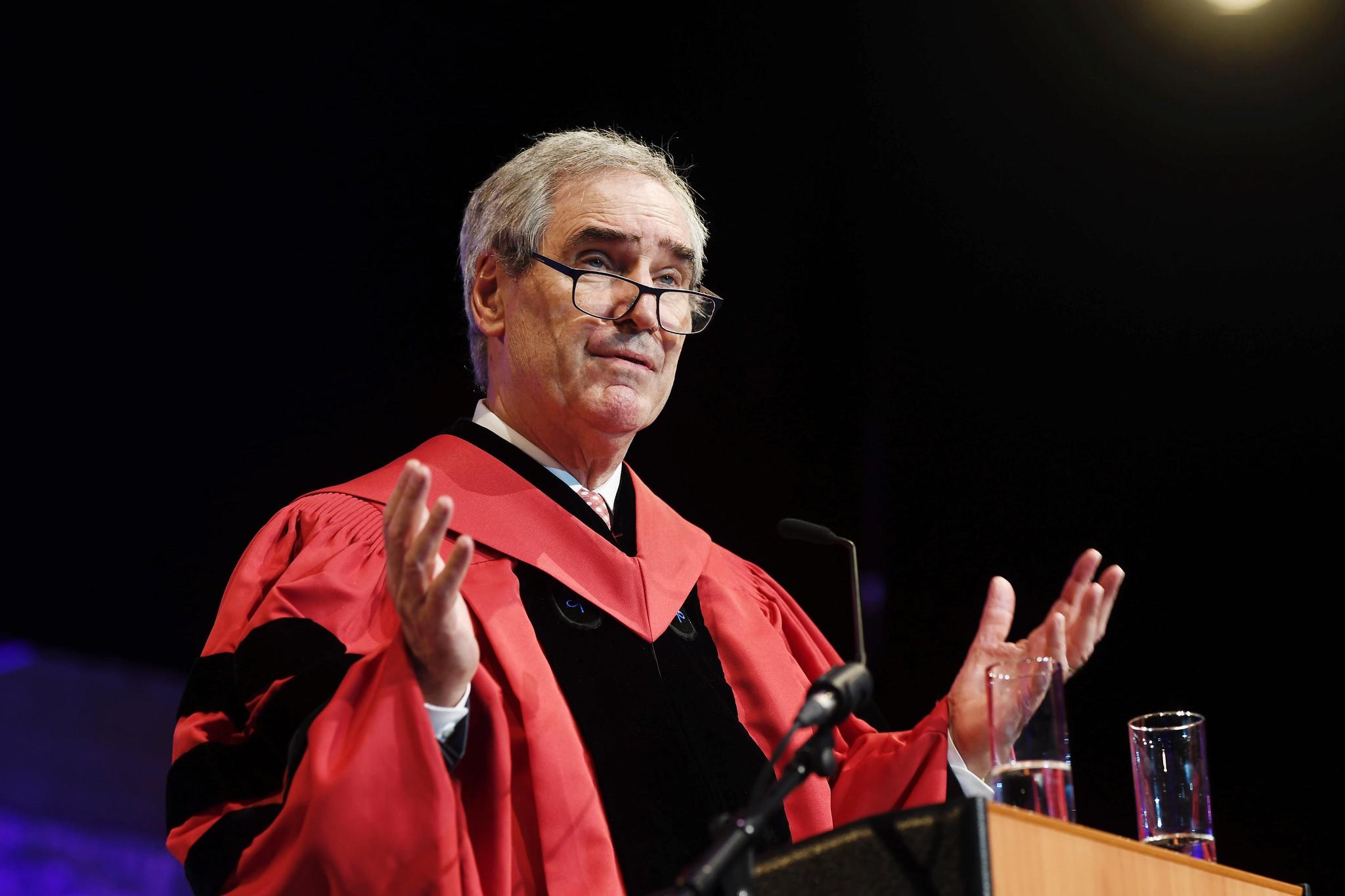 In rededicating the university to its unique mission, President Ignatieff noted that “we serve an ideal that began its life in this city, that is, Karl Popper’s open society. For us, this is not an empty slogan. We had to fight for it” Ignatieff said.

He continued: “These days ‘open’ is hard. You have to listen, learn, change your mind, accept when you’re wrong, stick up for what you believe when you know you’re right. Closed is easier. Shut your ears, harden your heart, close your eyes, read from the script.”

“We have to be aware of the ongoing changes threatening our understanding of democracy, pluralism and academic freedom. Academic freedom, integrity of research and teaching, institutional autonomy, participation of students and faculty in higher education governance are fundamental values of higher education in Austria,” the minister said. 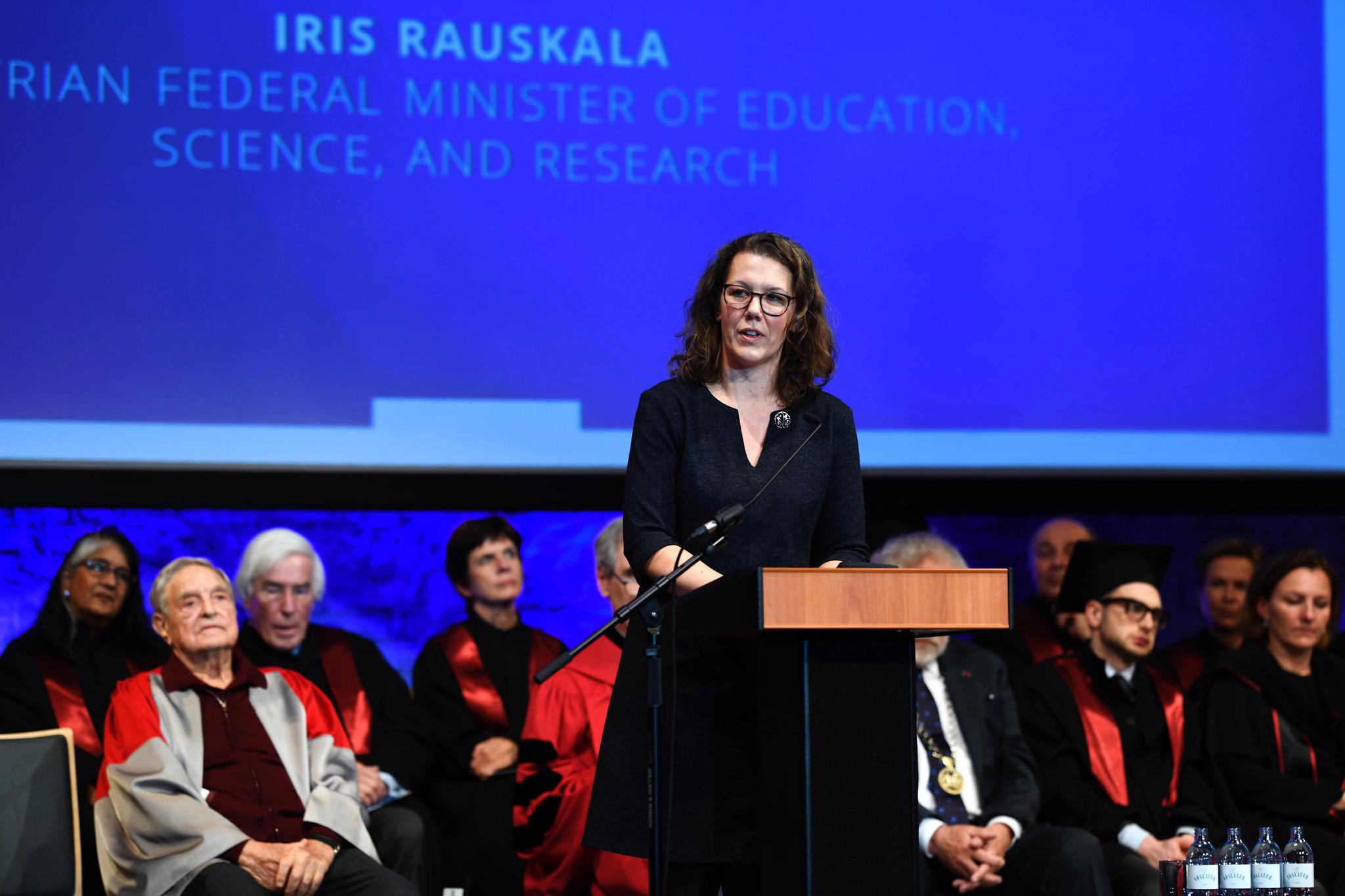 “I strongly appreciate CEU for taking this move as an opportunity for academic and institutional development and I am looking forward to CEU’s contribution to its new social, cultural and institutional environment in Vienna” she concluded.

Iris Rauskala was followed by Michael Ludwig, Mayor of Vienna. “Two years ago we all witnessed something that I believed to be unthinkable, and should, in fact, have no place in a united Europe. An academic institution was told that it was no longer welcome in a nation’s capital city.”

“In a situation like this it is a matter of course for me, as a mayor of a neighboring country’s capital, to open Vienna’s doors immediately - not only because of our close ties with other European nations and cities, not just out of respect for the great value of academic education, but also based on a deeply human and cosmopolitan attitude” Mayor Ludwig said.

“With its emphasis on humanities and social sciences, CEU perfectly complements the community of universities already present in Vienna. For Vienna, the privilege of hosting a university like this is of great scientific value, but also of economic importance” he added. 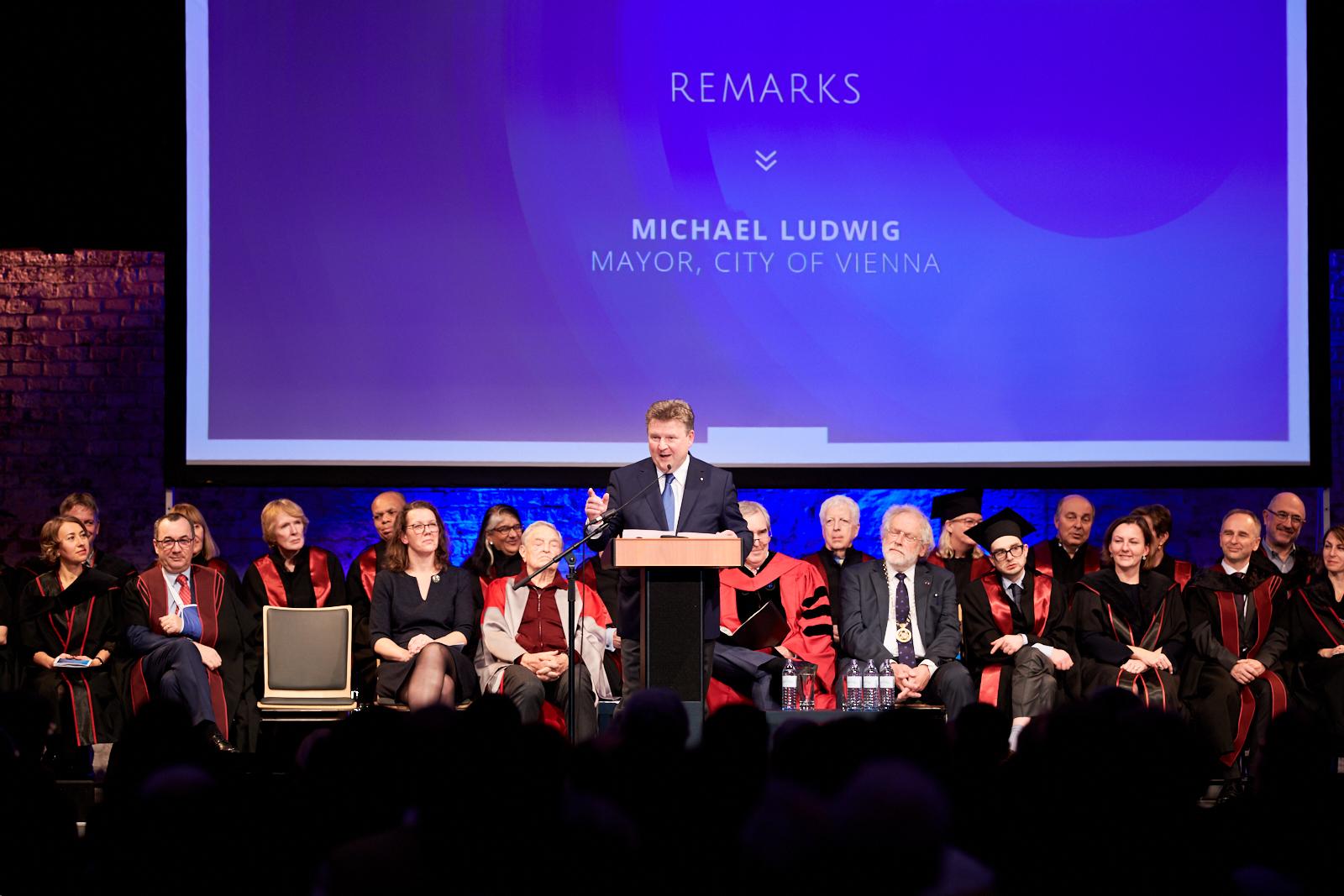 Next, President of the Austrian Academy of Sciences Anton Zeilinger reminded the audience that it took a very long time for Vienna to develop its diverse and vibrant academic community after World War II, with many of its top academics forced to leave the country or murdered in the Holocaust.

“One point that might have been the reason for you to come here is the large academic freedom and autonomy that has developed here over the years. What has also developed here is a focus on quality,” he said.

“We can offer the integration of your students and scientists to the local scientific community, by the shared usage of research infrastructure.” 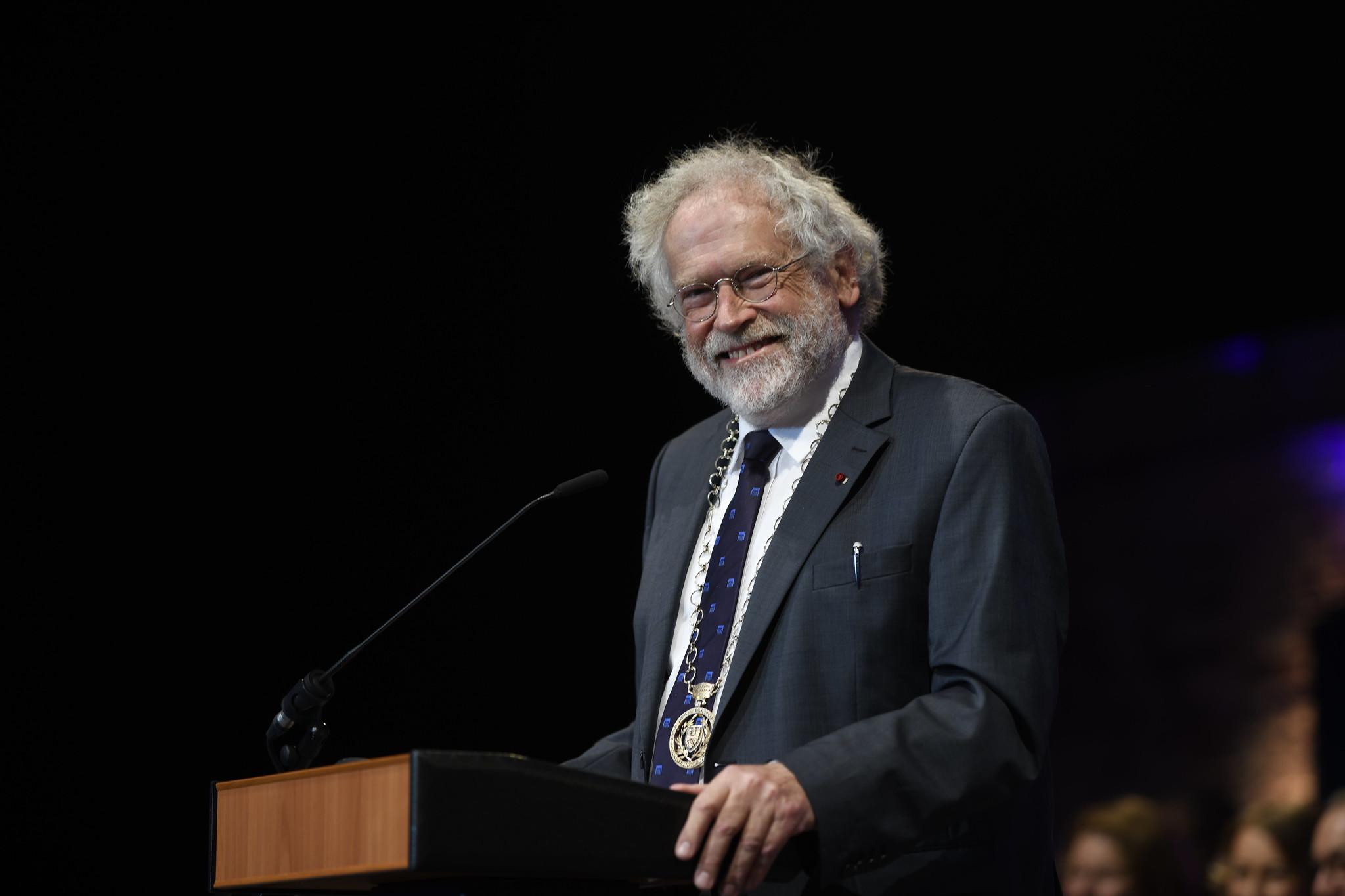 Research showcase: dehumanization, biotechnology and networks in the 16th century

Anna Bara, CEU’s Austria Alumni Chapter Leader was next. Praising Vienna as a wonderful place to study, live, and work, offering countless opportunities for personal and professional development, Bara offered CEU’s Vienna cohort the guidance, advice, and support of CEU’s close-knit alumni network.  “A diverse body of professionals, our dream careers span the public and private sector, ranging across academia, government, business and non-profit organizations. We call upon the skills and the knowledge that we acquired during our time at CEU each and every day, and we are happy to share our professional insights with you.” She concluded by recalling CEU’s world-class research, “It never ceased to inspire me then, as I hope it inspires you now.

This lead to the evening’s Research Showcase – a pecha kucha-style presentation by Professors Maria Kronfeldner and Robyn Radway, and PhD candidate Mirko Dukovic.

Professor Kronfeldner from CEU’s Department of Philosophy introduced her current research “The Epistemology of the In/Human.” She began by illustrating how the act of unseeing the ‘humanity’ of refugees, via military night-vision thermal image devices, makes it easier for the military personnel to “not rescue the refugee, to not feel empathy, to not regard the refugee as one of us.” The provocation followed swiftly: “Why should one care to study dehumanization? Because all of us do it” she said, giving the example of pedestrians passing by homeless people in the street. „There is plenty of evidence in humanities and social sciences that dehumanization not only occurs in hate crimes, genocides, crimes against humanity but it occurs regularly in daily life.”

Next was Mirko Dukovic, PhD candidate in CEU’s Department of Legal Studies under supervisor Professor Judit Sandor, recently awarded a prestigious ERC Synergy Grant. Dukovic is investigating the impact of recent developments in biotechnology on society and their legal consequences. By decoding biomodifying technologies such as 3D bioprinting of human tissues for transplant surgeries, Dukovic aims to provide an overall understanding of the technology before the public discourse is hijacked by fear and or hype. “Tissue engineering can provide for extension of human life. Biotechnologies can provide for human enhancement, “ he said, but followed with a stark warning that “if these technologies slip out of the regulatory frameworks, we face serious consequences in respect to the value of human life.”

Finishing up the showcase, Assistant Professor Robyn Radway from CEU’s Department of History spoke of her research reconstructing the world of a group of Habsburg subjects living in 16th century Constantinople in what was called the German House. Likening the inhabitants’ everyday communications to a “contemporary facebook”, she described the riches of what they have left behind for the historian to discover: “images, quotes, short messages, signatures of friends and exotic, decorated papers into small hand-held albums that they could keep in their pockets.” A collaboration between Radway and colleagues in CEU’s Department of Network Science, “this interdisciplinary digital humanities project makes it possible to better understand the albums and the people involved in their creation.”

George Soros: “We will maintain a presence in Budapest. We feel morally obligated to do so”

Then CEU Founder George Soros spoke. The famed philanthropist began by thanking CEU’s staff, faculty, and board of trustees for making the move to Vienna possible.

“I established the CEU in 1991 as a graduate school for the social sciences and humanities. My goal was to help the countries emerging from the dark days Soviet repression. I wanted to create a university that takes its principles and social responsibility seriously” he said. “CEU has been a great success. Indeed, over these nearly 30 years it has outgrown its original mission and has changed with the times to meet new challenges.” 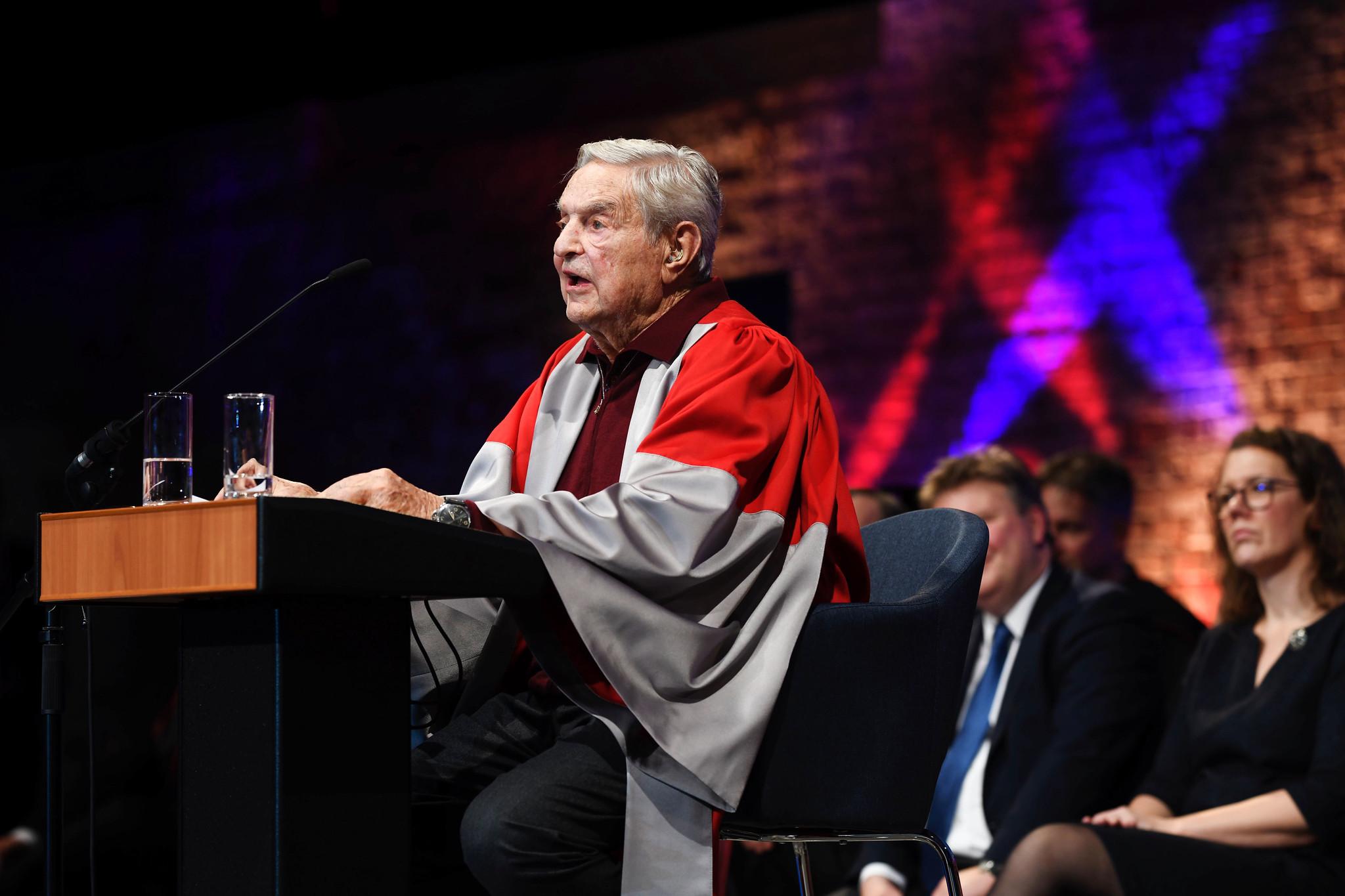 “CEU has steadfastly defended the principle of academic freedom against a concerted attack by the corrupt government of Victor Orban, who was hell-bent to destroy it. CEU’s epic struggle against a repressive regime generated worldwide support. That struggle is still ongoing” he added.

“We will maintain a presence in Budapest. We feel morally obligated to do so because the people of Budapest led by the students and professors of other universities repeatedly took to the streets to demonstrate their solidarity” Soros explained.

Soros announced that his aim is to “turn CEU into something truly unique: a globally networked university that meets the requirements of the twenty-first century.” Based on the existing close cooperation between CEU and Bard College, and on their shared network of associated colleges, universities and other educational institutions, Soros announced the launch of the Open Society University Network (OSUN).

“It will be a partnership of equals established for the mutual benefit of its members and it will offer a new model of international cooperation,” Soros said, adding that to help realize this ambition, the Open Society Foundations is committing 750million euros to CEU.

Having completed his speech, Mr Soros turned to take his seat. At the same time, the audience rose to their feet, expressing their admiration with an extended round of applause that lasted several minutes. It was an emotional moment for many of CEUs community, especially as it has been several years since their Founder was last able to set foot in Budapest.

President Ignatieff brought the event to a close: “George, on behalf of the CEU community--17000 strong around the world--thank you for this magnificent expression of support. With one typically decisive stroke, you have guaranteed our future for years to come. We will strive to make you proud of us.”