During the last weekend of September, I, along with many other students, boarded coaches that would take us across the hilly landscape of Transdanubia to CEU’s brand new campus in Vienna’s tenth district. The journey marked a milestone in the University’s history and represented a fresh beginning following a turbulent period of uncertainty.

Upon disembarking in the city centre, we each made our way back to our respective new homes, weary from travel, but filled with anticipation at the prospect of studying in one of Europe’s cultural capitals. Over the following days and weeks, I set about exploring what the city has to offer. Vienna boasts an efficient and reliable public transport system, making every corner of the city easily accessible. Below are just a few highlights from my travels.

Karlskirche and the Church of St. Elisabeth 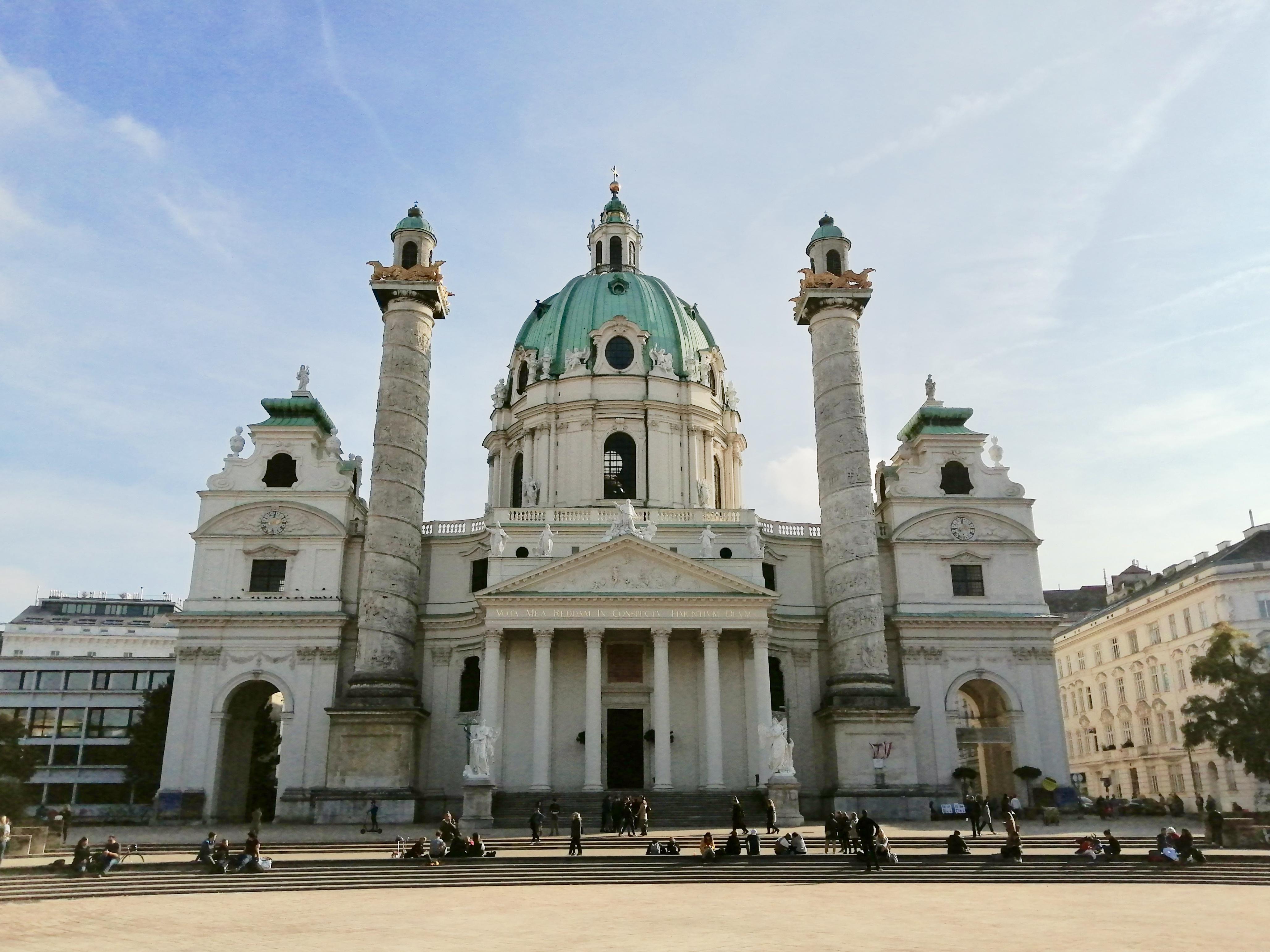 My first stop took me to Karlsplatz, a vibrant town square bordering the first and fourth district. Many of Vienna’s ecclesiastical structures are housed in this locale, but the grandiose Karlskirche (Church of St. Charles) unquestionably takes pride of place. Commissioned by the Emperor Charles VI, this early eighteenth-century edifice was designed by the Baroque architect Johann Bernhard Fischer von Erlach. The Church’s backstory is written in the tragedy of the Bubonic Plague which swept through the region before slowing in 1712. The following year, Charles VI would pledge to construct a church as a show of homage to St Charles Borromeo, the patron saint reputed to have cured the afflicted. The façade is framed between two impressive columns, styled after Trajan’s Column in Rome, and featuring vivid tableaux of the Saint’s life. The Church’s extravagant Baroque style harkens back to the burgeoning of resplendent architecture that defined the Renaissance and is a testament to Vienna’s historical capacity for cultural revivals.

Walking a little further south, a more modest structure came into view, the Church of St Elisabeth. This neo-gothic redbrick parish church is given prominence by its position at the intersection of four long and narrow streets, each oriented towards the Church’s 74-metre spire. Even on a Friday afternoon, there was an atmosphere of reverent quiet in the surrounding streets, which offered a welcome repose from the bustle of the city centre. Reading the plaques and brochure, I was surprised to learn that the Church’s namesake referred to Elisabeth of Thuringia, more commonly known as Elisabeth of Hungary. Her patronage over hospitals, the homeless and sick children encapsulate the spirit of charity and guardianship so central to the function of the smaller parish churches. Most significantly, for me, she was a reminder of the close cultural and historical ties binding Austria and Hungary together. 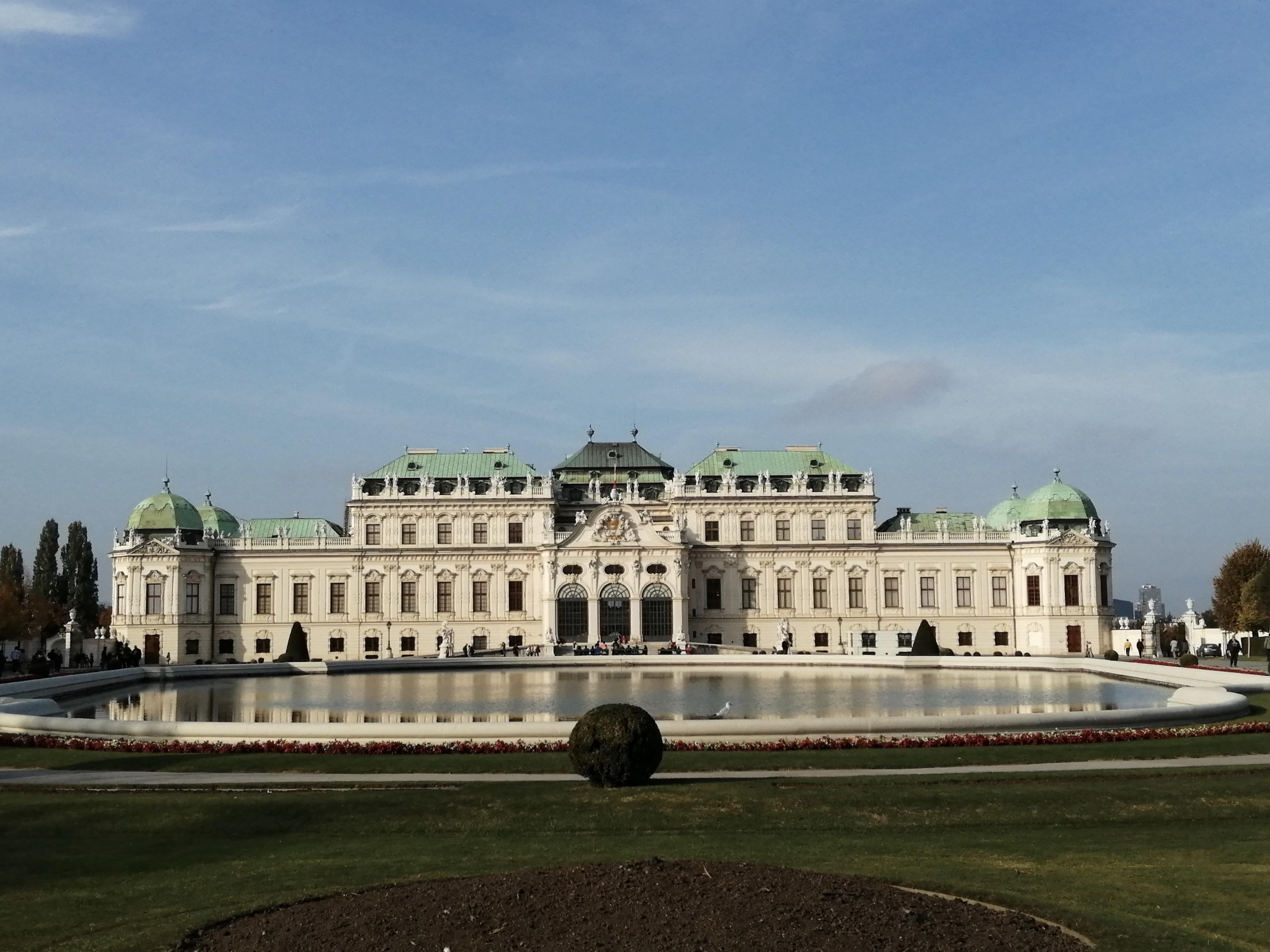 Vienna’s third district, Landstraße, is one of the larger districts and is characterized by commerce, tourism and a strong international presence. An abundance of flags adorns its main streets, marking the presence of Vienna’s numerous foreign embassies. Indeed, it is unsurprising that this district would serve as Austria’s international showcase, for it houses one of the country’s most famous national treasures, the Belvedere. This extravagant and beautifully preserved palace complex was constructed under the auspices of Habsburg dynasty during a period of burgeoning artistic and architectural creativity. In 1697, Prince Eugene of Savoy conceived of the idea for a palace and garden which would combine the beauty of the natural and built environment. The architect Johann Lukas von Hildebrandt was commissioned to build the Lower and Upper palaces which were completed in 1716 and 1724 respectively. The French designer Dominique Girard set out the plans for the Places’ extensive gardens, drawing on his intimate knowledge of water technology to produce the fashionable jeux d'eau in the form of fountains and waterfalls. Today, the palace’s picture-perfect setting makes it an attractive site for tourists and newlyweds keen to capture lasting memories of their time in Vienna. For me, certainly, it is one of the highlights of my time as a student in this unique city. 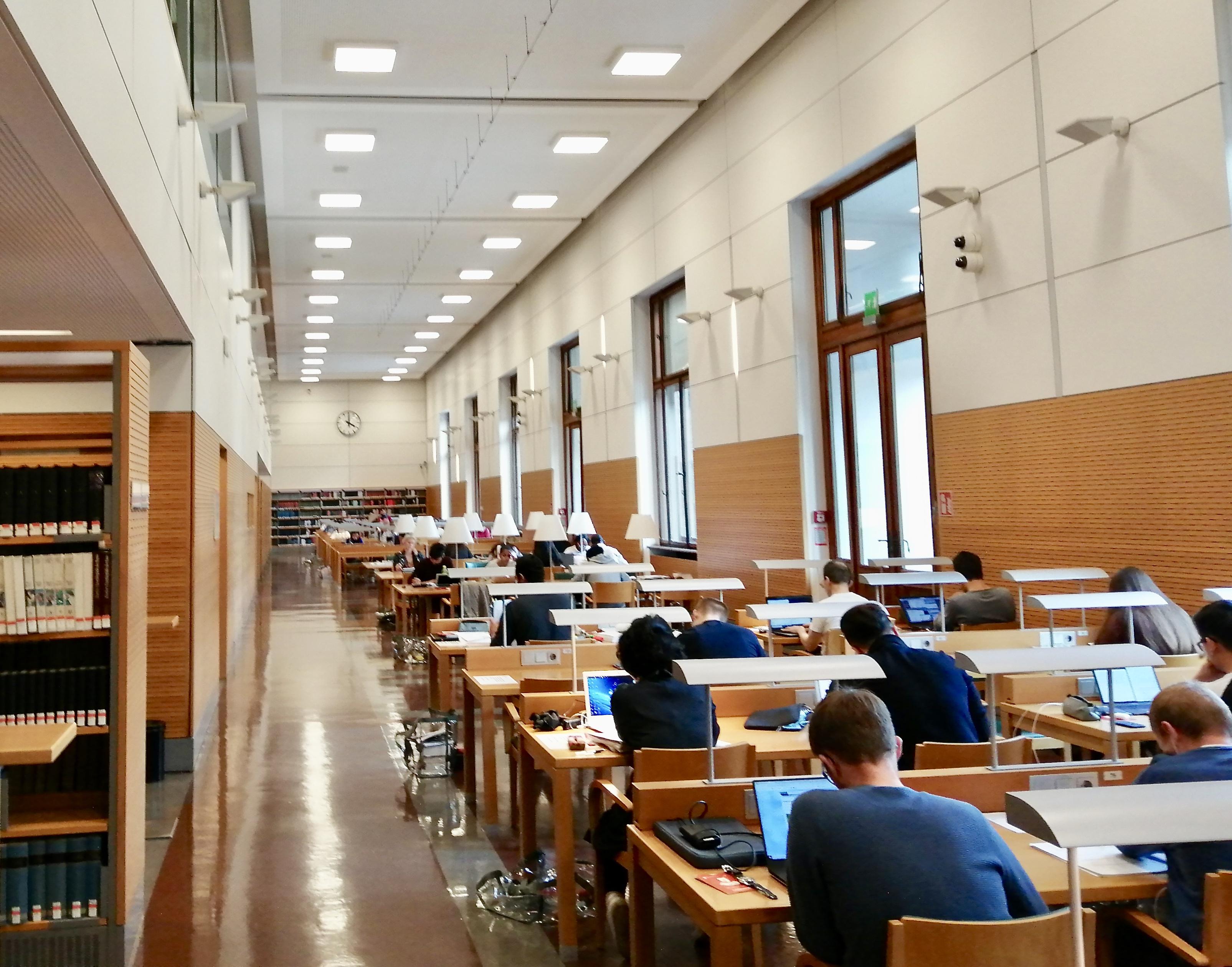 Students are always eager to seek out new study environments and the Austrian National Library ranks among my personal favorites. Located in the Neue Burg wing of the Hofburg, the former Habsburg imperial palace, the National Library dates as far back as 1368 when Johannes von Troppau, canon of Brno, produced an ornately illuminated transcription of the biblical Gospels for the Habsburg Duke Albrecht III. This book was the cornerstone of a collection which would multiply over the centuries, amounting to more than twelve million items today. In 1722, Emperor Charles VI, the same ruler who had commissioned the Karlskirche, set about expanding and renovating the Library using the same Baroque style. Upon entering the State Hall, one is greeted by an imposing statue of the Emperor inviting you to admire the various frescoes depicting events of national importance. On the ceiling is the famous Cupola fresco which depicts the deification of Charles VI, surrounded by symbols of the House of Habsburg. Aside from its historical appeal, the muffling silence of the Library’s spacious reading rooms offers an excellent study spot for those looking for an alternative to the University Library. 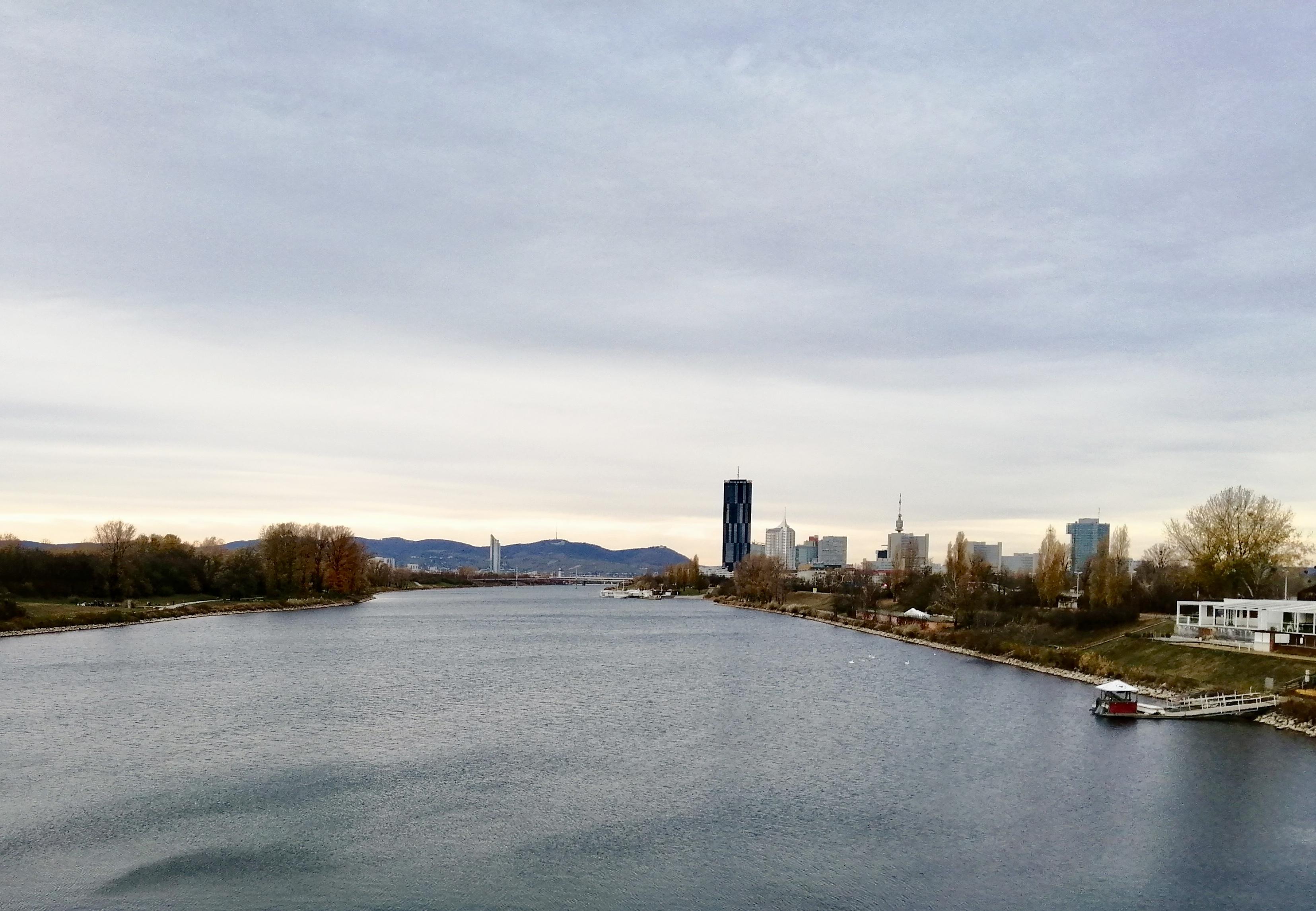 Even in a city as extensively urbanized as Vienna, one can find sanctuaries of nature. In fact, some of these emerged – paradoxically – as by-products of the city’s built environment. During the late nineteenth century, the Viennese government began exploring ways of protecting the city against the regular threat of flooding from the Danube. By 1875, an inundation area was dredged out along the river’s left bank which went some way towards offsetting the risk. A century later, between 1972 and 1988, a subsidiary channel was created producing the “New Danube”. The resulting elongated island would become known as the Donaunsel, or Danube island. Today it has become a dynamic focus for many types of outdoor recreation, including swimming, canoeing and cycling. The shore of the island is dotted with charming raft-houses, rocking gently with the current. During the summer months, these would accommodate maverick holiday makers, keen to experience a sense of oneness with nature. From here, my first exploration of Vienna was brought to a close with a sublime river sunset.

The move to Vienna has not been without its challenges. However, it has also opened up an entirely new academic and cultural world for CEU’s dynamic student body to experience. So far, I have seen only a fraction of what this exuberant metropolis has to offer, but I look forward to exploring it in full over the months ahead and would encourage other students to do the same.