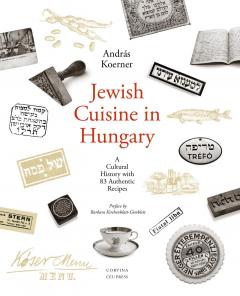 This was the first year that the Jewish Book Award included the Jane and Stuart Weitzman Family Award for Food Writing and Cookbooks.

CEU Press, in its presentation of the book, remarks that Koerner refuses to accept that the world of pre-Shoah Hungarian Jewry and its cuisine should disappear almost without a trace and feels compelled to reconstruct its culinary culture. His book presents eating habits not as isolated things, divorced from their social and religious contexts, but as an organic part of a way of life.

It describes the extraordinary diversity that characterized the world of Hungarian Jews, in which what could or could not be eaten was determined not only by absolute rules, but also by dietary traditions of particular religious movements or particular communities. Although this book is primarily a cultural history and not a cookbook, it includes 83 recipes, as well as nearly 200 fascinating pictures of daily life and documents.

Cover image: Hungarian writer Gyula Krúdy (left), in the company of his family and friends,  celebrating his birthday at his home in 1930.