Rates of cultural evolution were much higher across the real hunter-gatherer social networks compared to fully connected populations, according to the study “Hunter-gatherer multilevel sociality accelerates cumulative cultural evolution" recently published in Science Advances. The authors point out that both segregation and integration are needed for the evolution of cultures and to achieve crossover discoveries resulting in significant innovation leaps.

The group of researchers led by evolutionary anthropologists Prof. Andrea Migliano, Dr. Lucio Vinicius (University of Zurich) and network scientist Dr. Federico Battiston (Central European University, Department of Network and Data Science) examined the possible link between the fluid sociality and high mobility of Agta hunter-gatherers from the Philippines and rates of cultural evolution. “The few extant hunter-gatherers offer a window into the lifestyle and sociality of earlier hominins and can therefore help us to understand the socioecological context in which human culture has evolved”, the authors explained in their introduction.

During the fieldwork the researchers mapped the social structure of the Agta hunter-gatherers using a radio sensor technology to record close range interactions between individuals every hour over a period of 1 month. “This technology enabled us to gather more reliable data on the social structure of these communities than the use of traditional questionnaires would provide”, said Dr. Battiston. The scientists mapped two multi-camp locations revealing an intra-camp structure with nuclear families linked by strong friendships and frequent movement of individuals between camps – a multi-level and fluid social structure. 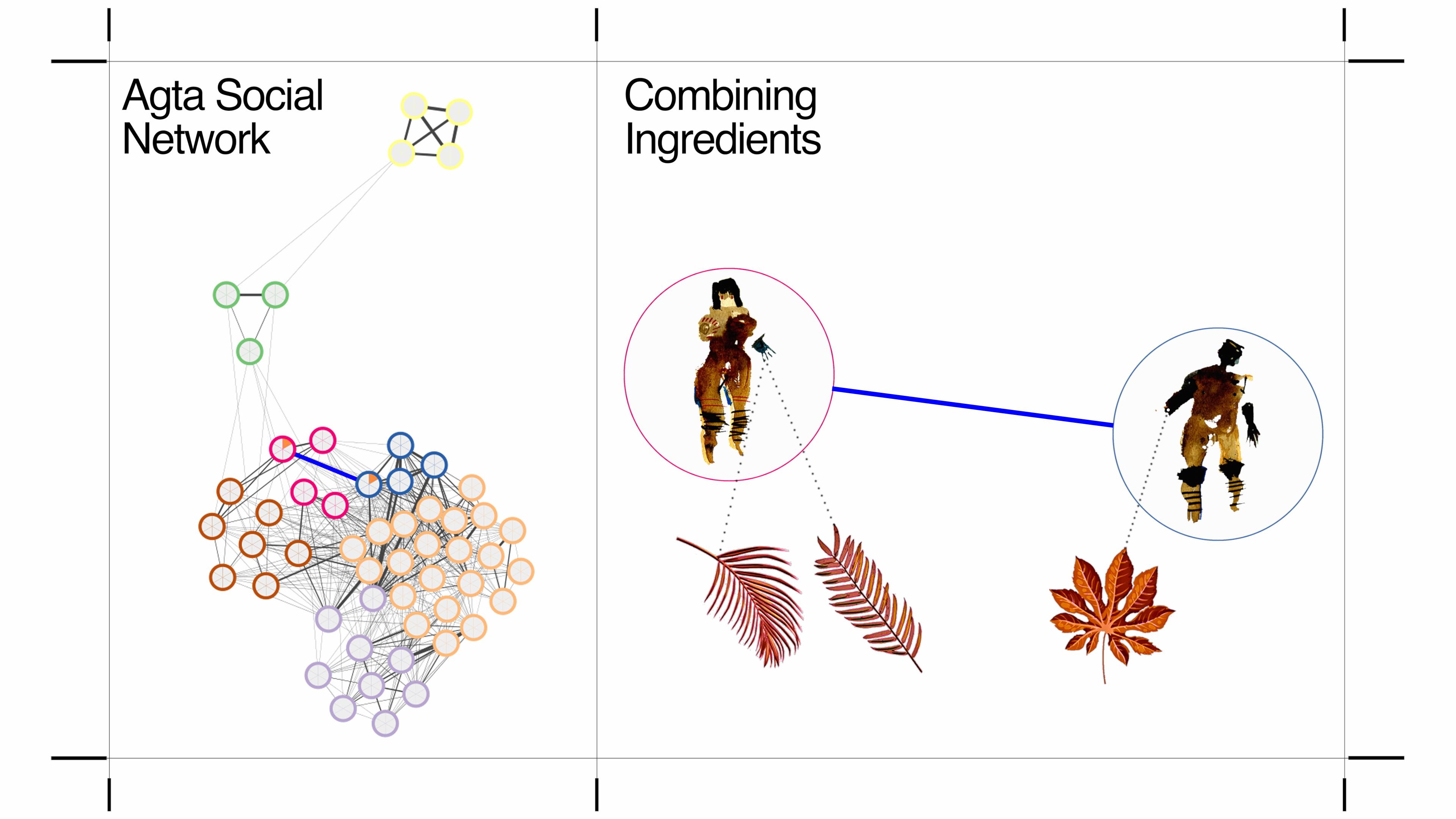 To investigate the effect of this social structure on the evolution of human cumulative culture, the researchers designed an agent-based model that simulated the creation of a superior medicinal plant product through the recombination of an original set of medicinal plants. “In this simulation, a successful mix of ingredients would produce a first cultural innovation. The experiment ended when the superior ingredients of the two opposite lineages were mixed together, generating a rare innovation leap or crossover”, as described in the video summary published with the study.

Simulations were run over the social network of the real hunter-gatherers. Pairs of individuals were selected based on the strength of their social ties and recombined their ingredients sharing the discovery of any new medicine with their close family ties. The analysis continued by comparing the results on the Agta network with the same simulation run over an artificial and fully connected network, where all individuals were connected to each other and immediately transmitted any discoveries to all network members. In fully connected networks, individuals were fast at discovering lineages A or B but it was rare to the two lineages to evolve together.  By contrast, different medicines from the lineages A and B evolve in parallel in different parts of the Agta network and later can be recombined to create the last, superior version of the medicine.  This level of innovation was not achieved in the simulation on the fully connected network. “While fully connected networks generally spread innovations more quickly, the real hunter-gatherer networks promote the independent evolution of multiple medicines in different clusters of the network that can be later recombined producing a more complex culture”, the authors elaborated. “This explains why rates of cultural evolution were much higher across the real hunter-gatherer social networks.”

“The evolution of a multi-level social structure observed in extant hunter-gatherers may be the explanation for the cultural dynamism of homo sapiens and its world wide expansion,” the study concluded. “This social structure of small and interconnected bands may have facilitated the sequence of cultural and technological revolutions that characterizes our species,” said Dr. Vinicius. “The constant visits between camps are essential for information to be recombined and continuously generate cultural innovations,” emphasized Prof. Migliano.

“Segregation and integration are both necessary to process and cultivate information. Consciously or not, individuals work together in a society to develop culture – similar to a collective brain: different regions are responsible for some isolated tasks, but information ultimately has to be synthesized for the whole mechanism to work,” explained Dr. Battiston. “The modular nature of the social network of interactions is crucial to foster lateral thinking and push forward independent cultural trajectories, which are developed in relatively segregated communities. However, encounters across camps are responsible for the greatest – but rarest – discoveries by allowing recombinations of different cultural lineages.”