Before studying at CEU, Jan Hradicky completed his BA with first class honors in Politics, Sociology and East European Studies at University College London (UCL). As an MA student in CEU's Department of Political Science, he focuses primarily on comparative politics and international relations. He has contributed to a project on formal and informal ethnic power-sharing in both democracies and autocracies.

Hradicky recently completed an internship at the Slovakian Ministry of Finance, where he worked on ways to increase the effectiveness of governmental expenditures and improve public services as an analyst.

We spoke to him on the occasion of his 2020 Presidential Scholar Award. This is an edited interview conducted on October 19, 2020.

Being at CEU and seeing all the great people studying there, I have found my peers to be so knowledgeable and clever. In this sense being recognized in this way was both a surprise and an honor, particularly because there are so many high-quality students here.

Previously I was at UCL, studying for my BA. Coming from Central Europe, I was interested academically in this region, the politics, especially the democratic backsliding and all the connected things that go with it. After my BA I wanted to come back and study the region from within - CEU is the best university in Central Europe. But it is not an ivory tower—it is engaged in a real fight for academic freedom. That we are now in Vienna clearly proves that CEU is experiencing the general backlash of the shifting political currents in this region. 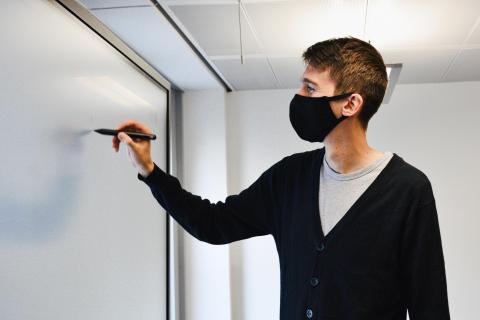 What advice do you have for others applying for this scholarship?

When it comes to selecting someone to write a reference, I really think that it’s better to choose someone who knows you very well and has worked with you a lot over time - even if that means it’s not a professor who everybody knows. In my case it was my colleague from Nexteria London which we founded together. I decided not to go for someone who knows me ‘generally’, but to find someone who knows me really well and could write a strong reference.

The award was announced during the CEU Opening Ceremony and my colleagues and family were delighted for me. My girlfriend, who also studies at CEU, was quite proud. We made the move from Budapest to Vienna together. We are here for our second year, and we support each other.

The work at CEU is very intensive compared to the British system. Last term I worked as a research assistant for Daniel Bochsler. His research team is mapping power sharing projects across all the countries in the world and focusing on how different ethnic groups are sharing power in terms of presidencies for example, and how many seats each has in parliament. It was very exciting to see how things are getting done and how much work is behind each database.