For the Urban Nature Atlas, the NATURVATION team coordinated the development of a database to map the use and impact of Nature-based Solutions (NBS) in 100 European cities, as well as to characterize existing practice; support an evaluation framework for NBS assessment; and undertake an in-depth comparative case study analysis. Since the close of the project, recently updated data on NBS has been transferred to CEU's Urban Nature Atlas site at www.una.city to carry forward the dynamic resource. The Urban Nature Atlas has also become a standard recommended source for the EU research area.

"Nature-based Solutions are basically urban nature elements through which you bring green or blue infrastructures to the city. They can be parks, green roofs, or community gardens - or blue elements like lakes, rivers and ponds," explains Almassy a post-doctoral researcher at the project. Of the Atlas, she further notes, "We wanted to understand the various characteristics of these project, what are their goals, who are their beneficiaries, how they are management and implemented are what are their actual impacts in cities - not only from an environmental perspective but also for people and the economy. How do these interventions impact climate adaptation, social and mental health, as well as job creation or sustainable consumption and production?"

In the face of global change and fundamental environmental, economic and social challenges in an increasingly urban world, sustainable development and resilience have become strategic issues for cities in Europe and beyond. NATURVATION employed a transdisciplinary and internationally comparative approach to unlock the potential of NBS in cities while exploring governance, business, finance and participation models that enable their successful integration into the urban fabric. Such interventions are seen to hold significant promise in responding to these challenges and enabling urban transition to sustainability.

"One flagship of NBS and one of my favorites is a set of residential buildings in Milan -the Vertical Forest which is two big towers with trees everywhere," reflects Almassy. She notes that the unique environment gives access to the significant benefits that accompany proximity to nature. The Curtain Forest in Timişoara, Romania is another standout according to the researcher. This long line of forest on one side of the city prevents the wind movement and also works against pollution.

The Urban Nature Atlas team initially set out to collect 1,000 cases from 100 European cities, including everything from small cases like a single rooftop to large cases like an entire green corridor in Barcelona, with about a third of atlas projects run by cities, another third run by NGOs, and the largest segment of projects being collaborations of various public and private entities working together. 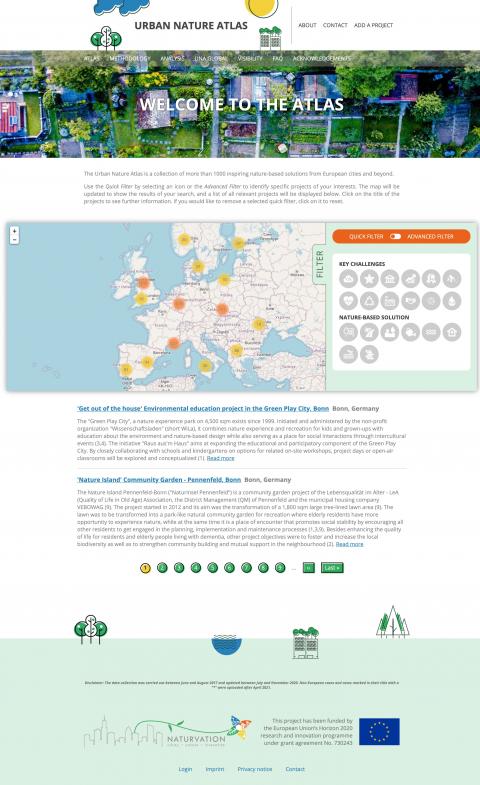 With its beginnings stemming from work with the Ecologic Institute, a think tank and research institute in Berlin, the Urban Nature Atlas aims to narrow the gap between the promise of NBS and their uptake. The team has ambitious plans to expand the Atlas to a global level, and the recently updated version allows crowdsourcing new cases from around the world. Additionally, a scenario tool has been developed by the team at CEU, which allows re-imagining any given urban space by adding NBS. Using a simple map-based interface that is designed for participatory planning with stakeholders, the Urban Nature Explorer not only lets its users to play with reconfiguring cities, but it also helps make the business case by calculating the likely impacts of the changes envisioned. As its last act in the Naturvation project, the team is pilot testing the Explorer to develop NBS ideas for selected sites. Beyond Naturvation, the team is working with the university's Innovation Lab focused on bringing the tools developed in Naturvation and sustaining their impact through a startup.

As Professor Pintér says, "digging ourselves out of the deep hole of unsustainability is an exercise of historic proportions, but the Naturvation project gave us some very clear examples that show it can be done, if we learn to work with and not against nature. Cities, of all the places, will play a pivotal role, and through the concepts and tools we wanted to make both an academic and a practical contribution to help get on with the journey".