On Wednesday, June 2, CEU's student documentary showcase screens new shorts from this year's filmmaking courses, followed by a discussion with the filmmakers. The selected films are projects which emerged from the classes Fundamentals of Documentary Filmmaking, Documentary for Social Change, Visual Anthropology and Ethnographic Filmmaking, and Foundations of Visual Practice – all curricula of CEU's Visual Studies Platform (VTP).

The filmmaking training for students is supported by the resources and facilitation of the CEU Library's Media Hub, which includes the Mirabaud Media Lab (MML), an acoustically-engineered space for instruction, media production and teamwork. Since the pandemic affected access to such onsite resources, VTP educators adjusted courses to include approaches for making films with the personal equipment available from one's home, such as smartphones and online software.

"I want to point out that while it was an especially challenging year with students working under extraordinary restrictions given the pandemic, this body of work rivals any other selection that we've seen in past years," notes Jeremy Braverman, Media Hub Head and Media and Visual Education Specialist. The filmmakers span a number of departments with projects engaging the subject matter of research interests through the visual medium.

Braverman adds, "The courses represented teach different approaches and the projects have different requirements, so we have a very diverse program," regarding the scope of the 73 minute showcase composed of ten films. "We have character-driven documentaries, advocacy documentaries, which focus on promoting a cause or organization, as well as ethnographic films which differ in their approach, as they are constructed from an anthropological theoretical perspective." He notes that this year, the students who weren't able to come to Vienna because of the lockdown ended up attending the course remotely and making films about subjects they know very well in their home countries.

"Working on a film is always a challenging and enriching process. My collaborators and I had the chance to do some onsite training before the second lockdown in Austria, and then much of the process was based on self-learning and helpful online feedback from our instructors," reflects Tiphaine Trudelle. Trudelle created the film "#Free Ahmed Samir!" which follows CEU students taking part in the actions to call for the immediate release of fellow student Ahmed Samir. She also collaborated on the film "Nicht in Unserem Namen", a documentary about the aftermath of the 2020 Vienna attack on the Muslim community in Vienna. 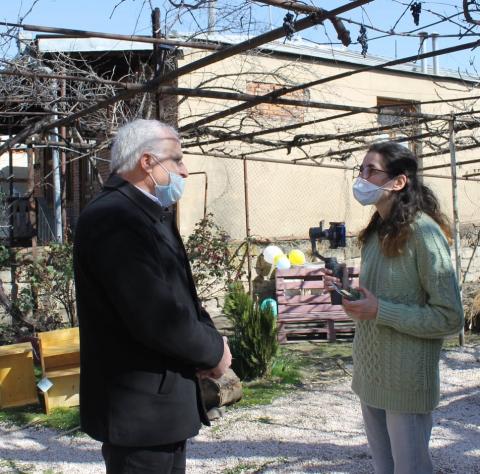 Another student filmmaker, Tamar Giorgobiani worked in her home country deploying the skills learned from the VTP's adjusted curriculum for filmmaking at home. "Even though the editing process was challenging, thanks to the feedback from my professors and classmates, as well as the enthusiasm of my interview subjects, I was motivated to do my best in order to create an end product that would be able to help the organization and the people with disabilities in Tsnori, Georgia reach their goals," she comments.

Giorgobiani made the film "A House For Their Future" as part of her Documentary for Social Change course. The video was made as a part of the fundraising campaign #AHouseForTheirFuture of the Parents' Organization for the People with Disabilities in the Sighnaghi region to buy a house that will serve both as a day-center and as a social enterprise for adults with disabilities.

Visit here to view the program and online screening.