Working for the Renewal and Strengthening of Democratic Societies: The CEU Democracy Institute

Based in Budapest, the CEU Democracy Institute examines and seeks solutions to challenges democracy faces across the globe today.

Democracy is under siege, and the threat is subtle and insidious. Ever-more sophisticated attacks pose formidable new challenges to democratic governance and the fabric of society. Academic freedom is a basic element of a democracy, but it was hurt in Hungary when in 2017 controversial legislation curbed CEU’s ability to operate as an American university in the country. Ultimately, CEU was forced out of Hungary and re-launched its degree giving programs in Vienna in September 2019.

At the same time, the university began re-examining its contribution to the development of free and open societies, and a year later established a new research institute in Budapest to expand its mission of serving the future of democracy and open societies. The CEU Democracy Institute (DI), led by Co-Directors Laszlo Bruszt and Eva Fodor, builds on the 30-year legacy of world-class research, teaching and outreach in the spirit of democracy and freedom demonstrated by CEU.

“The Democracy Institute was launched to continue CEU’s mission in Budapest: to conduct free academic inquiry into questions related to democracy, to train students in these areas, to engender debates and to disseminate research results as widely as possible. Since the researchers as well as the activities of the DI are and will be closely integrated into the life of CEU in Austria, the DI will serve as a bridge between our two locations: Vienna and Budapest,” says Fodor.

While the DI is based in Budapest, it is global from its inception. It forges projects with key partners including the Open Society University Network (OSUN), a global consortium of educational institutions led by CEU and Bard College, CIVICA, a pan-European collaborative of eight leading universities jointly seeking solutions to social, economic and political challenges, and Open Society Foundations, a global philanthropic partner of OSUN which also provides funding to DI’s programs.

Research at the DI

The Institute aims to provide a new, academically ambitious and socially responsible platform for research and public engagement. The Institute’s six research groups address some of the biggest challenges to democracy in our world today. Each is addressed from the perspectives of several disciplines: 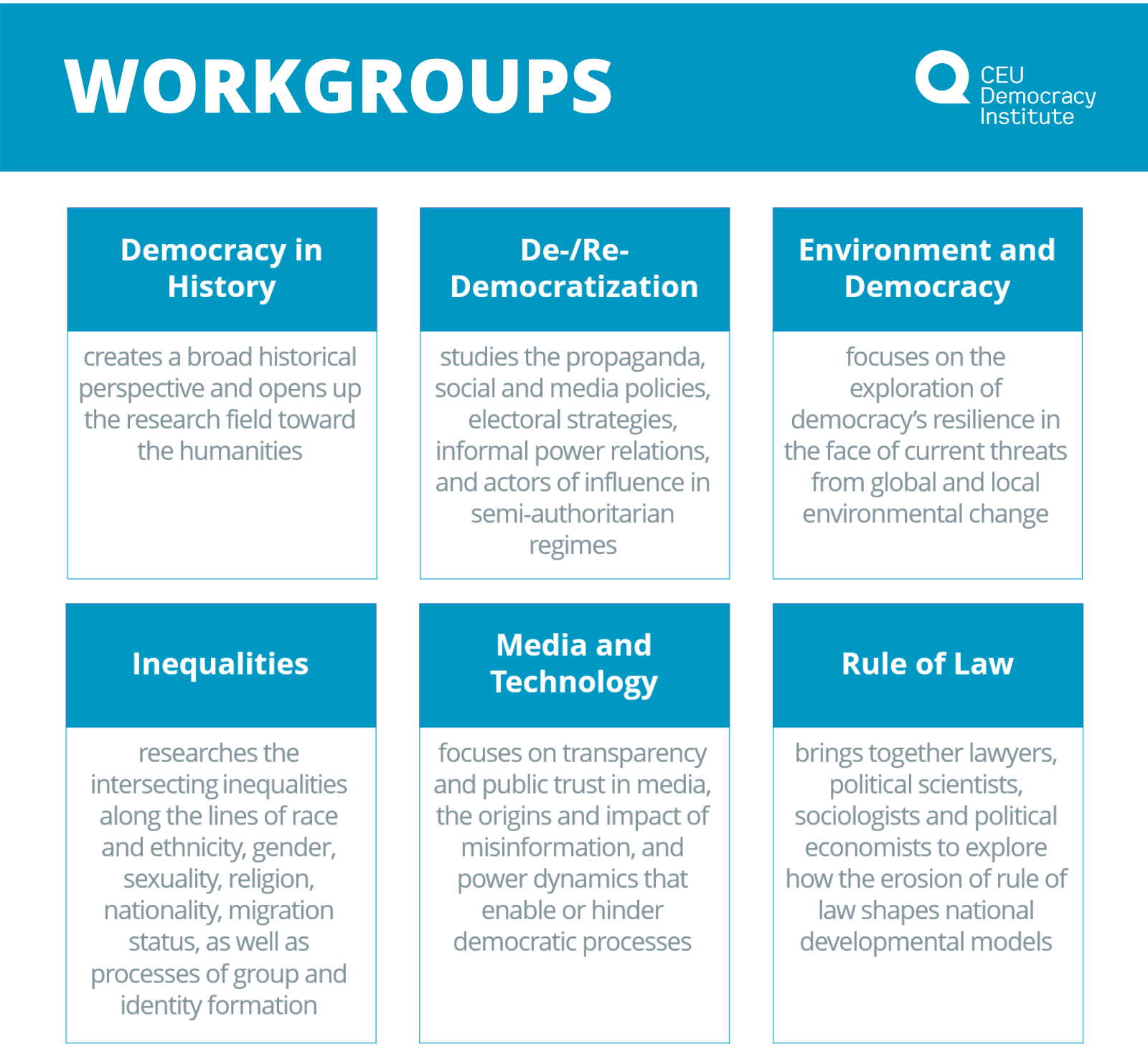 The workgroups’ permanent researchers reside in Budapest cooperating with affiliated CEU scholars based in Vienna. Each working group welcomes visiting academics, fellows, doctoral students and post-docs working on individual projects housed by the Institute. Finally, the DI is developing research, training and public engagement collaborations with individual scholars and teams throughout the OSUN and CIVICA networks.

DI in the World

DI’s prominent researchers and focused mission enable the Institute to attract high-caliber thinkers, and become a key convener of free debate and dialogue across disciplines and professions, as shown by its very first event, which, on the heels of the American elections, brought together CEU Rector and President, Michael Ignatieff, Stephen Holmes (New York University), David Runciman (Cambridge University) and Nadia Urbinati (Columbia University).

The Institute’s other events also featured leading policymakers and scholars. Didier Reynders, EU Commissioner for Justice, MEP Katalin Cseh and Professor Laurent Pech discussed how the Rule of Law Conditionality Mechanism of the European Union will function in practice. Vera Jourova, Vice-President of the European Commission, Clement Beaune, Secretary of State for European Affairs in the French Ministry of Foreign Affairs, MEP Michal Simecka, and Professors R. Daniel Kelemen and Dimitry Kochenov addressed the question how to strengthen democracy at the national level in European Union. The Hotspots of Democracy in Crisis series offered discussions on Belarus, Russia, China and Myanmar while Balint Magyar and Balint Madlovics presented their book, The Anatomy of Post-Communist Regimes at Stanford University. 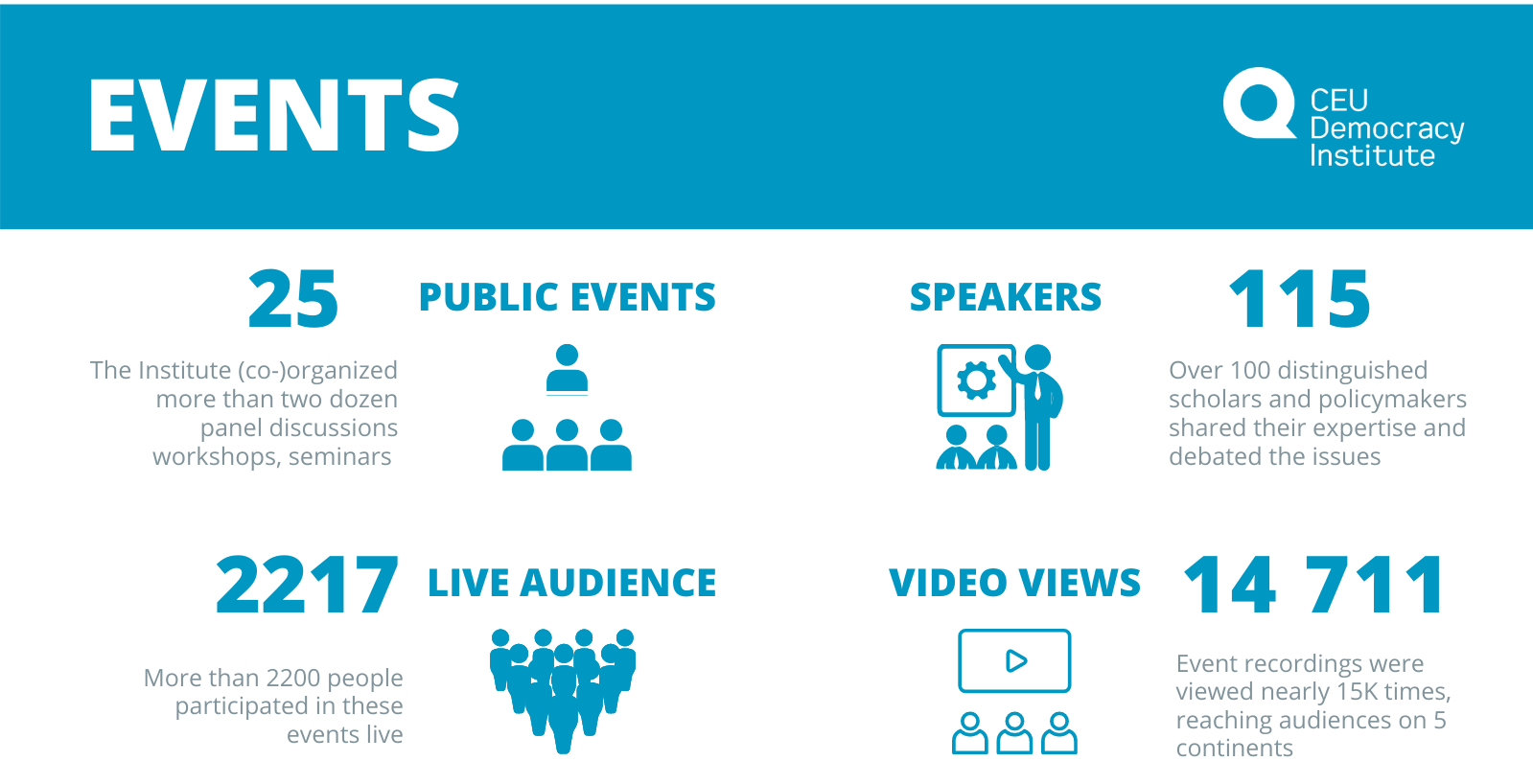 DI and the Media

Launched in April 2021, Review of Democracy’s purpose is to discuss, analyze, reflect upon and develop possible solutions to the challenges to democracy across the globe today. The online journal draws on the intellectual resources of several European universities and research centers and links them together in a lively forum. Its interviews, especially the conversation with Polish ombudsman and CEU Alumnus Adam Bodnar, have already been receiving the attention of the international community of scholars. 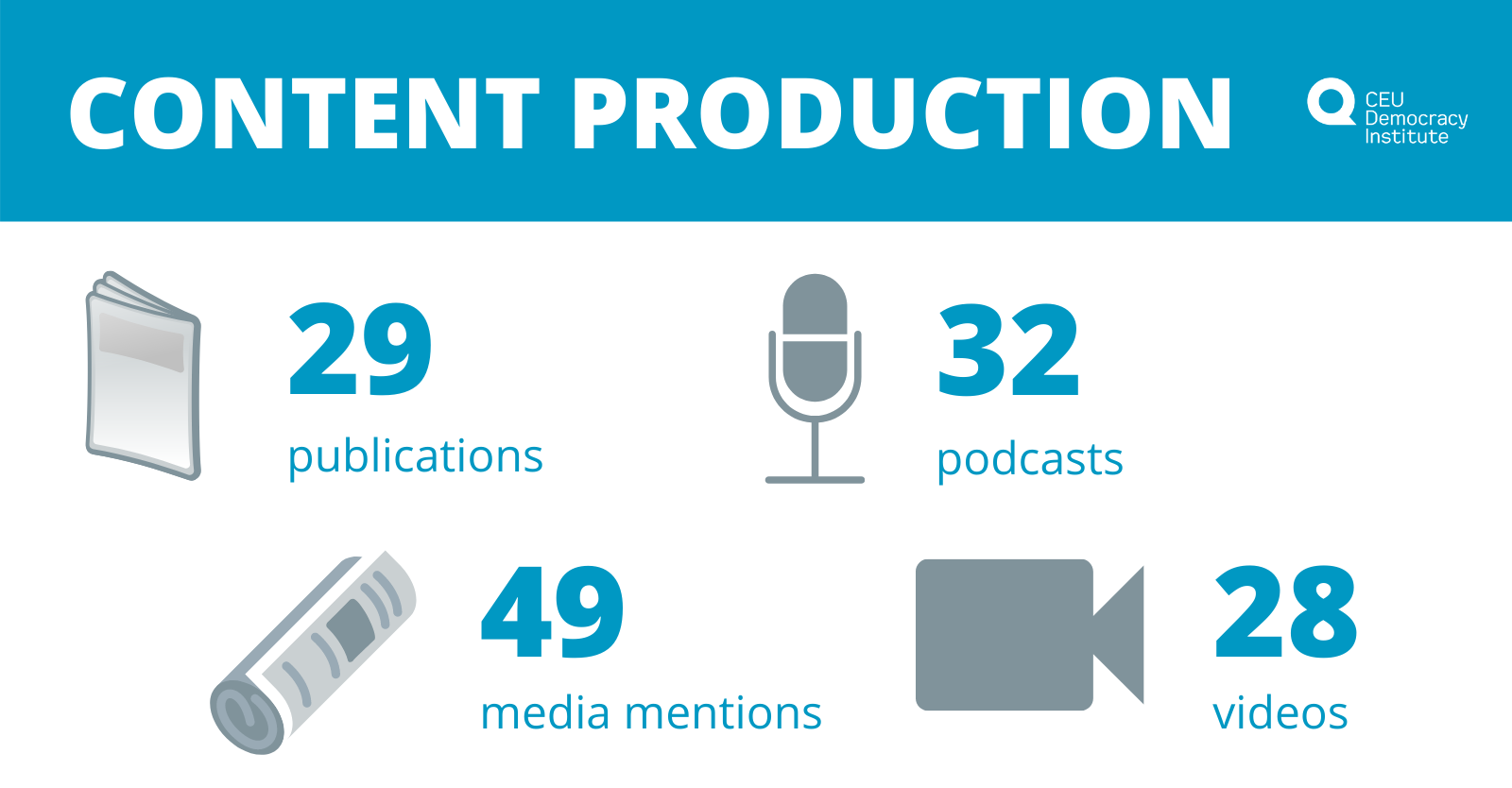 DI researchers are often asked to comment on recent issues by journalists representing the largest media outlets all over the world  and shape the public debate on issues related to democracy. Petra Bard was quoted in The New York Times, addressing a landmark lawsuit in Hungary against a journalist. Zsolt Enyedi and Andrea Peto commented on academic freedom in El Pais and in Times Higher Education, respectively, while Euractiv interviewed Marius Dragomir on the media situation in Hungary, and Laszlo Bruszt talked to Finnish public broadcaster YLE about the fight for control over media and universities in Hungary.

Being based in Budapest, proactive engagement with the Hungarian public is of crucial importance for the Institute. DI continues to host two important CEU initiatives: the Istvan Bibo Free University, which brings together Hungarians of differing viewpoints and generations to discuss the social, economic and political problems of Hungary and the European Union in an atmosphere of mutual respect; and the Borderless Knowledge series, in which CEU professors, leading Hungarian experts and well-known public figures discuss exciting recent scientific findings and their direct impact on our everyday lives.

Events in the series address issues like how genetics and the environment impact our lives, or how social sciences can help address and mitigate the health, social, economic, legal and cultural impacts of the Covid-19 pandemic. Lectures are held in Hungarian and usually followed live by hundreds of people; they are also uploaded to YouTube with English subtitles.

To support democracy’s future, it is imperative that we better understand the nature and practice of 21st century democratic rule and, even more importantly, develop effective strategies of democratic resilience. This will be the subject of the next major event of the CEU Democracy Institute, Perspectives on Democracy, a conversation with Lieutenant Governor of California and Former U.S. Ambassador to Hungary, Eleni Kounalakis.

The DI will start the next academic year with its first annual conference. To connect CEU’s two campuses, it will launch a monthly seminar series with leading scholars. Additionally, in cooperation with the Budapest Mayor’s Office, the DI will host the conference of the Free Cities Forum in September, bringing together mayors, senior politicians, civic leaders and distinguished scholars from around Europe and beyond.