This July, Assistant Professor Alan Watt will leave CEU after more than two decades of service. He will be missed by the university’s community and as he transitions, students and colleagues celebrate his outstanding teaching and leading role on research and courses in Environmental Justice, Politics and Humanities (JPH) and Environmental Arts and Humanities.

When Watt joined CEU’s Department of Environmental Sciences and Policy faculty in 2002, he had already been teaching at the university since the late 90s as a lecturer via the Civic Education Project (CEP), which dispatched lecturers to Central-Eastern Europe and Eurasia in an effort to enhance the development of higher education in societies engaged in political and economic transition. During his years at CEU, Watt has served as Director of the Doctoral Program (2008-10) and Head of Department (2010-15). Prior to joining CEU, he taught at the Kyiv Mohyla Academy (Ukraine); at the Jozsef Attila University, Szeged (Hungary); and at the University of Aberdeen (Scotland).

“I thought it was valuable to give our environmental students exposure to environmental thought and philosophy, which are my major fields,” notes Watt as he reflects on teaching. In addition to these disciplinary areas, Watt has more recently developed the department's thesis preparation program for one-year students with a focus on academic writing, which has led to stronger work among students. 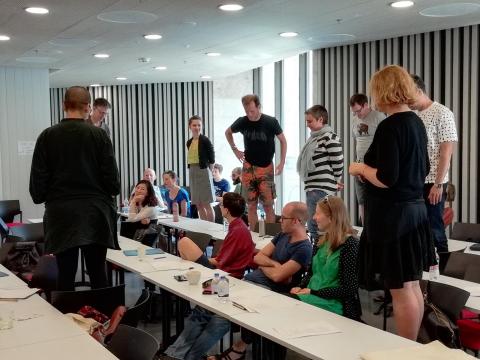 Associate Professor Alexios Antypas, who co-taught courses with Watt for many years at both the master’s and the Ph.D. level highlights that “One of Alan’s outstanding qualities as a teacher is the quality of the questions he poses to students. This is especially noticeable in seminar courses. Year after year Alan re-reads and reconsiders the course materials, gaining greater insights and posing more apt and incisive questions.” Reflecting on the work of his colleague, Antypas emphasizes that Watt puts his heart into teaching and it shows.

Watt points to supervising as another rewarding aspect of his work at CEU, making a difference among individual researchers. He remembers, for example, supervising the thesis of Anais Voski on her work related to the overview effect of astronauts from space and the impact that has on them. “I encouraged her to pursue it, even though it was a bit of an unusual topic. It turned out really well and she's now gone on to a PhD program at Stanford as part of the Virtual Human Interaction Lab to explore how the overview effect experienced by astronauts could become something experienced, at least virtually, by other people,” Watt comments.

Watt’s students express gratitude for his influence on their academic work and personal development. Daragh Hamilton, a first year PhD student who worked on his thesis with Watt remarks, "No one has done more for my academic confidence and self-belief than Alan. He is without doubt the most considerate, dedicated and thoughtful professor I've come across.”

Csaba Toth, who worked with Watt and is defending his PhD thesis this year notes Watt’s impact on his research: “In his teaching approach, Alan always insisted on focusing on how a research can complement the already existing body of knowledge, rather than on how the research confronts it. I think this is a very useful approach if one wants to fit into the scientific community.” 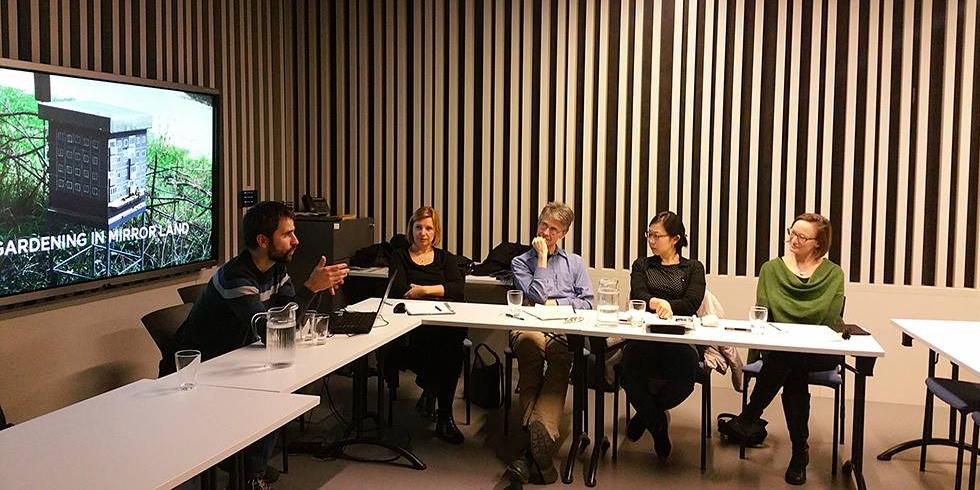 Watt (third from left) at CEU.

“His way of approaching things still serves as an inspiration for me – always staying calm, practicing a high degree of integrity even in the most challenging situations and providing the best quality in all endeavours – both professional and personal,” remarks Andrea Farsang who was supervised by Watt for her PhD.

Additionally, recent MESPOM graduate, Julian Willming appreciates Watt’s commitment to students and their ideas, noting, “The university is supposed to be a place of mutual learning. Teaching should not be one-directional, but symbiotic and inquisitive. Alan´s teaching approach integrated such a vision.” 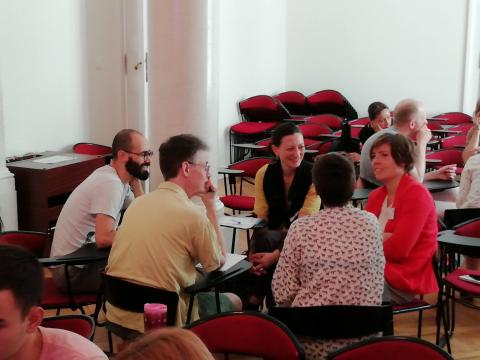 Watt with colleagues at CEU.

As Head of Department, Watt worked diligently to adjust the department’s credit ratio to better balance in-classroom and out of classroom learning, a gradual process that had implications for teaching and entailed complex planning. “We’re getting much better feedback from our students now. I think they're happier and less stressed and I feel proud of pushing that which I think was important.”

MESPOM Administrator Gyorgyi Puruczky, who joined CEU ten years ago when Watt was serving as Head of Department, notes,“Alan is person of high integrity, someone really nice to have on any team…He is open minded, non-judgmental and leaves room for others.” Antypas additionally recognizes Watt’s leadership, noting, “Alan has given many years of his life to CEU in dedicated service. Among other things, he served as Department Head at a critical time and did a great job that was appreciated by everyone.”

Watt has also made contributions during recent years to the Amedosz Trade Union as an active volunteer participating in strategic discussions. “I hope that CEU’s senior leadership engages seriously and constructively with the union and the new works council. It takes some extra time and effort, but I think it makes a big difference to the morale of employees,” he says.

Over the years, the Department of Environmental Sciences and Policy has changed significantly since Watt began at CEU. When he first arrived, it had only one program – a modular degree which largely served professionals who had already been working for five to fifteen years in their careers. While some completed the program modules consecutively in a single year, the modular structure allowed for professionals to work and simultaneously study over a longer period without becoming full time students. Eventually the appetite for this structure shifted and the department changed the master’s to a non-modular one-year program. Additionally, MESPOM, the Erasmus Mundus Joint Master’s Degree in Environmental Sciences, Policy and Management operated by four universities, has also been introduced, which yields a more global student presence. 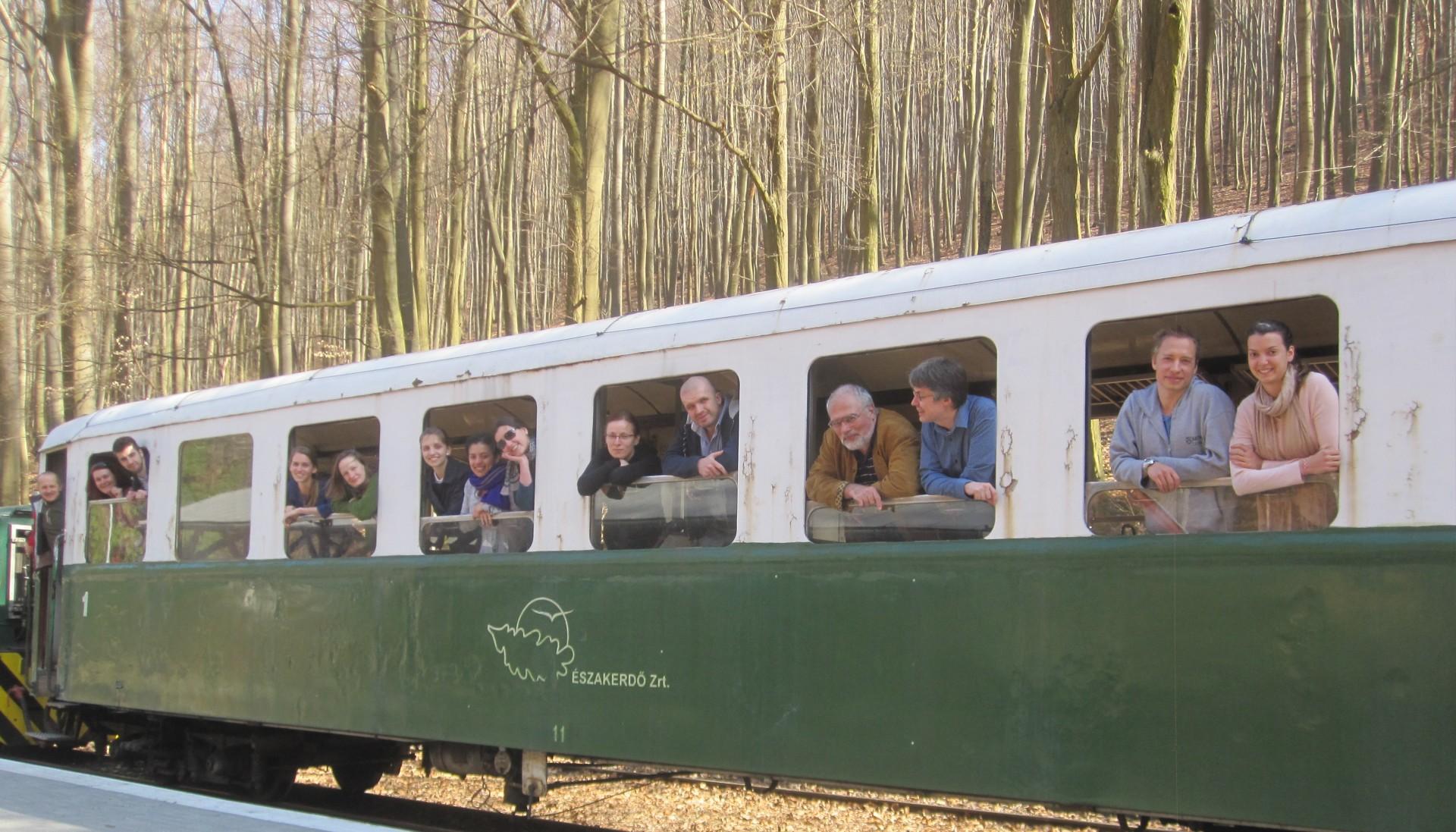 Watt (third from right) with colleagues.

In addition to reflecting upon teaching and departmental service, Watt acknowledges the ways in which the CEU environment has shaped him over the years – most significantly as a result of both the international perspectives as well as the interdisciplinary and multidisciplinary approaches emphasized. “I got to be in an environmental sciences department, which is quite deliberately set up to be multidisciplinary.  We've got people, for example, with backgrounds in sociology, geography, political science, biology, myself in philosophy, and many others,” highlights Watt, adding, “Overall, we cover a broad range and learn a lot from talking with each other from different perspectives. I learned a lot from my colleagues as a result of that.”