The students served on the Youth Council, where they supported the public event exploring the climate-nuclear nexus and related areas of existential threat within the context of Sustainable Development Goals. (CEU’s Nour Barakeh additionally served as a member of the Youth Council but was unable to travel to Scotland.)

“The panel ‘Existential Threats and Interconnected Solutions’ was one of the best discussions I have ever witnessed,” reflects Bot, who manages three social media channels of the International Forum for Understanding, and documented the event in Stirling. “Despite of the fact that the overarching topic on the connection between nuclear weapons and climate change usually follows a conventional path, the perspectives brought together by people who have experienced nuclear repercussions, who work with climate refugees, who themselves were refugees affected by climate change offered us, the audience, novel angles to reflect and act upon.” 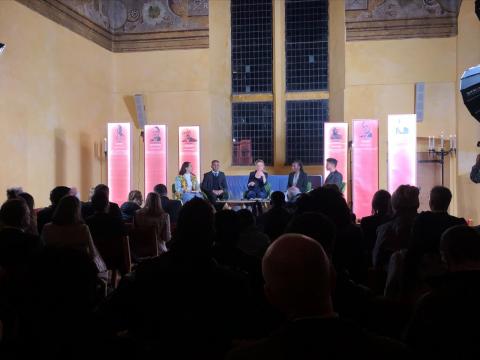 During the event, Christine Parthemore, CEO of the Council on Strategic Risks, discussed the urgency of connecting nuclear war to climate change, while a panel of young, global thinkers examined existential threats and interconnected solutions. “There were several memorable moments,” comments Fehrenbach, who was supporting administrative preparations for the event. “But one that I will remember for long, was when Heather Wokusch spoke during the panel and compared the climate anxiety of today to the nuclear anxiety of the 1980s. From there, a discussion evolved on how we can frame and message the challenges of today in order to encourage people to start acting.”

Bot notes that behind political discourses, which can sometime be cliché, she was able to meet individuals who materialize words into initiatives with impact. Fehrenbach also emphasized the value of convening despite mixed perspectives regarding the possibility for climate action from talks: “My most significant takeaway from this event was that - while there is much to criticize about the COPs - I learned that we should be thankful for the fact that 197 states come together peacefully to discuss our planet’s future. And while it might often seem too little, too slow and too expensive, it is the most fundamental step on which we have to build."