The CEU Democracy Institute's (DI) “Probing Democracy” conference was a two-day hybrid, event October 7 and 8, 2021 showcasing the richness of the scholarly work conducted at DI on the crises and resilience of democratic societies. From lawyers, historians and political scientists, environmental resource management and gender dynamics, to social inequalities and the Rule of Law, DI is a research center which prides itself on studying democracy in a multidisciplinary format.

In line with this intellectual stance, the conference featured roundtable discussions instead of classical panels. These roundtables allowed prominent experts to engage in fresh dialogue with colleagues hailing from different disciplinary backgrounds to reflect collectively on shared scientific and policy relevant research themes. Furthermore, three book launch events presented recently published works by DI scholars and CEU faculty to foster a dialogue between the author(s), expert discussant(s) and the attending public invited for a Q&A session.

The opening speech and welcome remarks were delivered by Laszlo Bruszt, Co-Director of the DI, and Shalini Randeria, President & Rector of the CEU, respectively.

Roundtable 1: How Can Knowledge Production Contribute to (Re-)Democratization

This multi-disciplinary panel featured Jennifer McCoy (Georgia State University), Alberto Alemanno (Haute Ecole Commerciale, Paris), Julia Sonnevend (DI/New School, NY), Anna Clark (University of Technology, Sydney) and Sonya Ziaja (University of Baltimore), moderated by Laszlo Bruszt. They examined the dangers to scientific knowledge production (such as public distrust), the role of civic education in defending the producers of knowledge, and what the role of the DI should be. 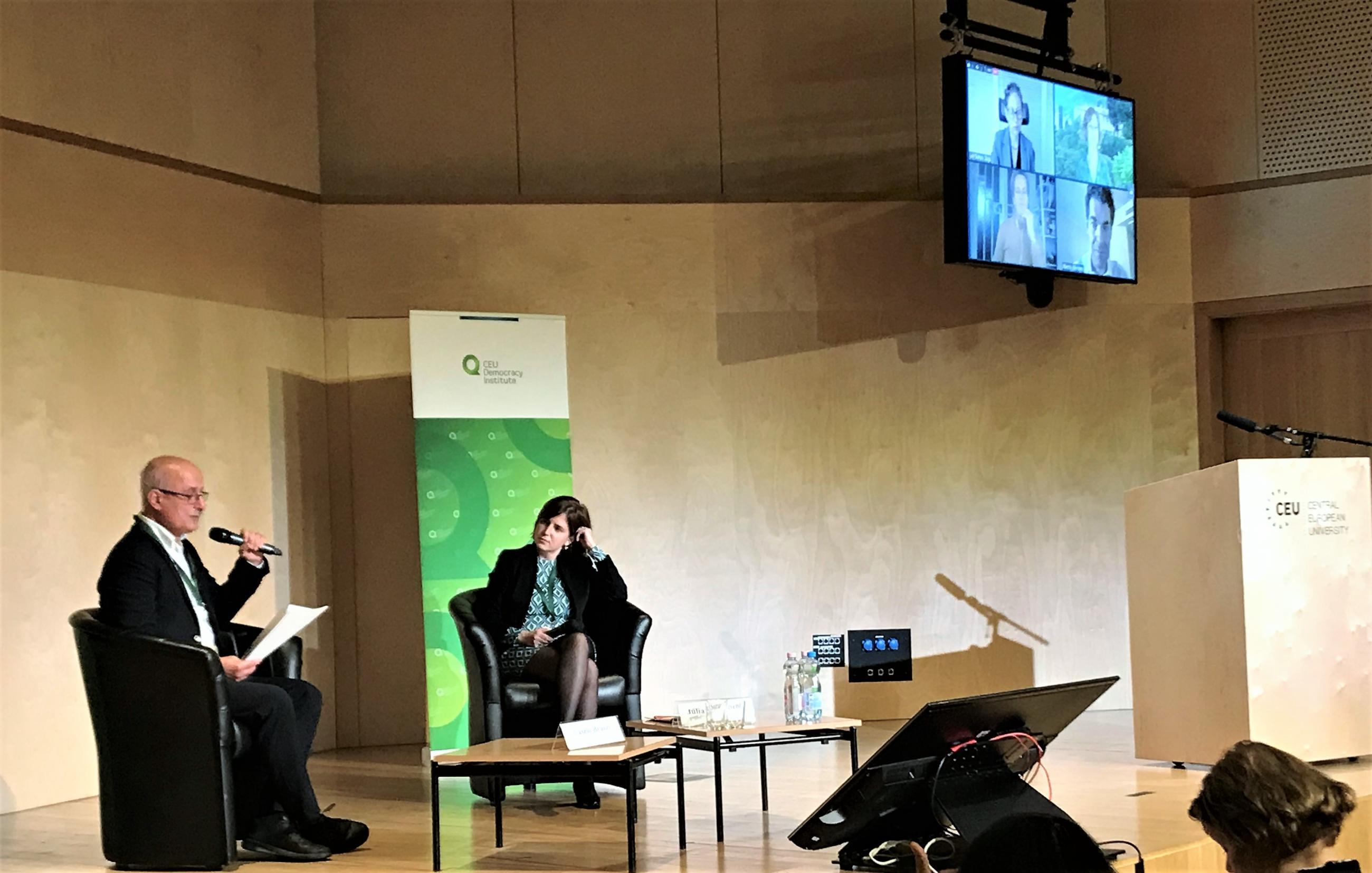 This event, moderated by Matthijs Bogaards (CEU/DI), introduced two books: The Gender Regime of Anti-Liberal Hungary by Eva Fodor (CEU/DI), and Politicizing Gender and Democracy in Context of the Istanbul Convention by Andrea Krizsan (CEU/DI) and Conny Roggeband (University of Amsterdam).

The Gender Regime of Anti-Liberal Hungary (forthcoming, Palgrave MacMillan) explains a new type of political order that emerged in Hungary in 2010: a form of authoritarian capitalism with an anti-liberal political and social agenda. The author analyzes an important part of this agenda that directly targets gender relations through a set of policies, political practice and discourse—what she calls “carefare.” The book reveals how this is the anti-liberal response to the crisis-of-care problem and establishes how a state carefare regime disciplines women into doing an increasing amount of paid and unpaid work without fair remuneration. Eva Fodor analyzes elements of this regime in depth and contrasts it to other social policy ideal-types, demonstrating how carefare is not only a set of policies targeting women, but an integral element of anti-liberal rule that can be seen emerging globally.

Roundtable 2: Illiberalization and the (Ab)Use of the Public Sphere

Fake bots, misinformation, and social media companies’ business models all play a central role in the public sphere. Until recently, strengthening the legal-institutional autonomy of a social sphere between the domestic realm and the state was thought to deepen democratic systems. 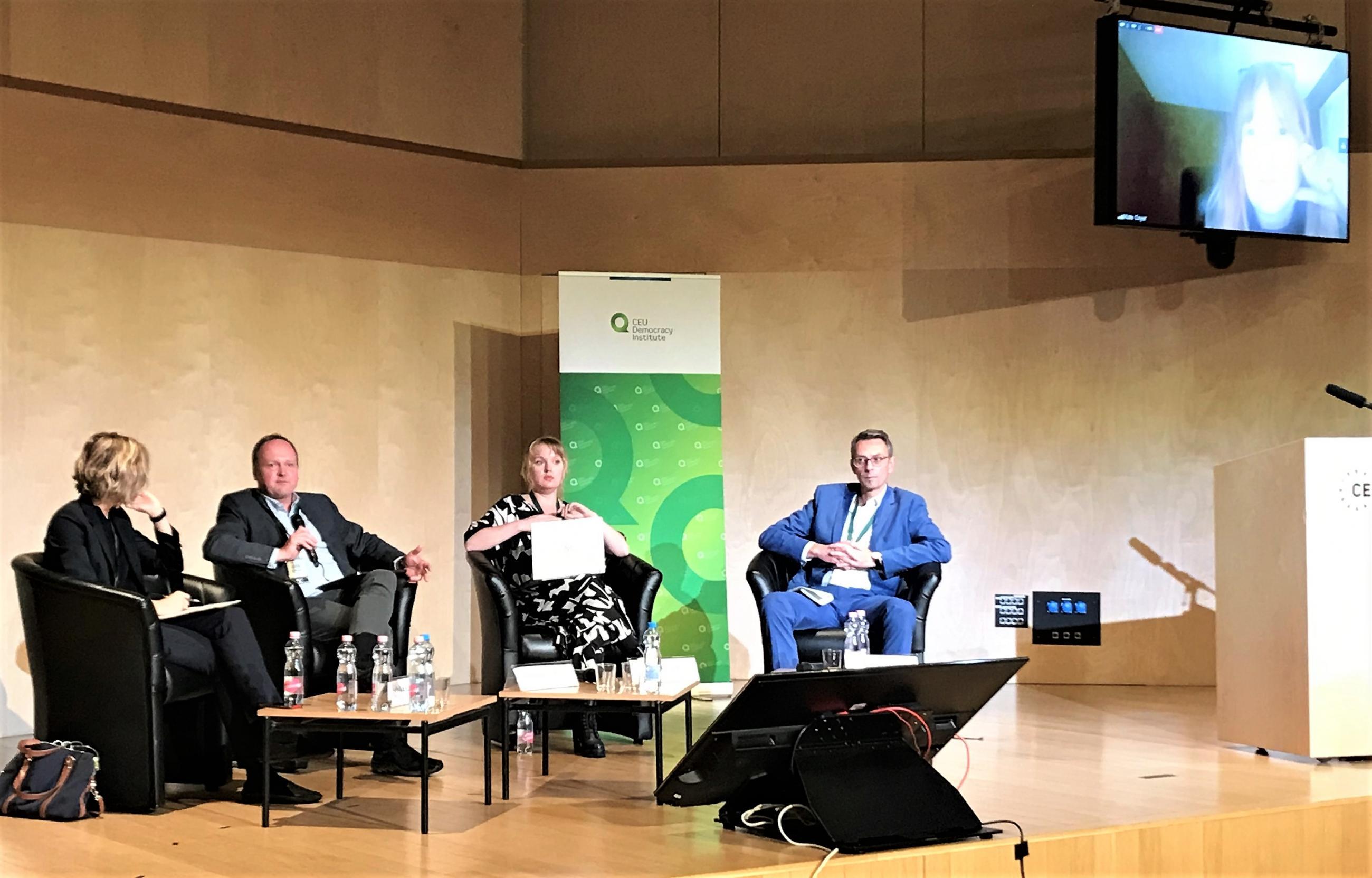 This roundtable with Balazs Vedres (CEU), Carsten Schneider (CEU/DI); Kate Coyer (CMDS/DI) and Sian Brooke (London School of Economics), moderated by Zselyke Csaky (CMDS/DI, Freedom House) explored how the digitalization of the public sphere has changed this picture radically, as it is now populated with unprecedented technologies of surveillance and social control used by public and private actors to alter narratives and policy preferences.

Performance of democratic versus authoritarian systems can be measured in part in relation to equitable access to resources, such as water and energy. During this roundtable the panelists, Christian Brethaut (University of Geneva), Cristina Corduneanu-Huci (CEU/DI), Erik Swyngedouw (University of Manchester) and Guntra Aistara (CEU) and moderator Eva Fodor (CEU/DI) discussed inequality, social justice, the environment, and how they coincide or clash with democratic governance.

While considering their hopes and challenges for the future, some panelists optimistically pointed out that current movements will help find dynamic solutions. Others were more pessimistic and pointed to current crises, such as the social-ecological consequence of mass-migration.

The keynote lecture of the conference was delivered by Branko Milanovic (The City University of New York), with the title Income Inequality in the Past Three Decades: Globally, in Advanced Economies and in China. Introduction: Dimitry Kochenov (CEU/DI). 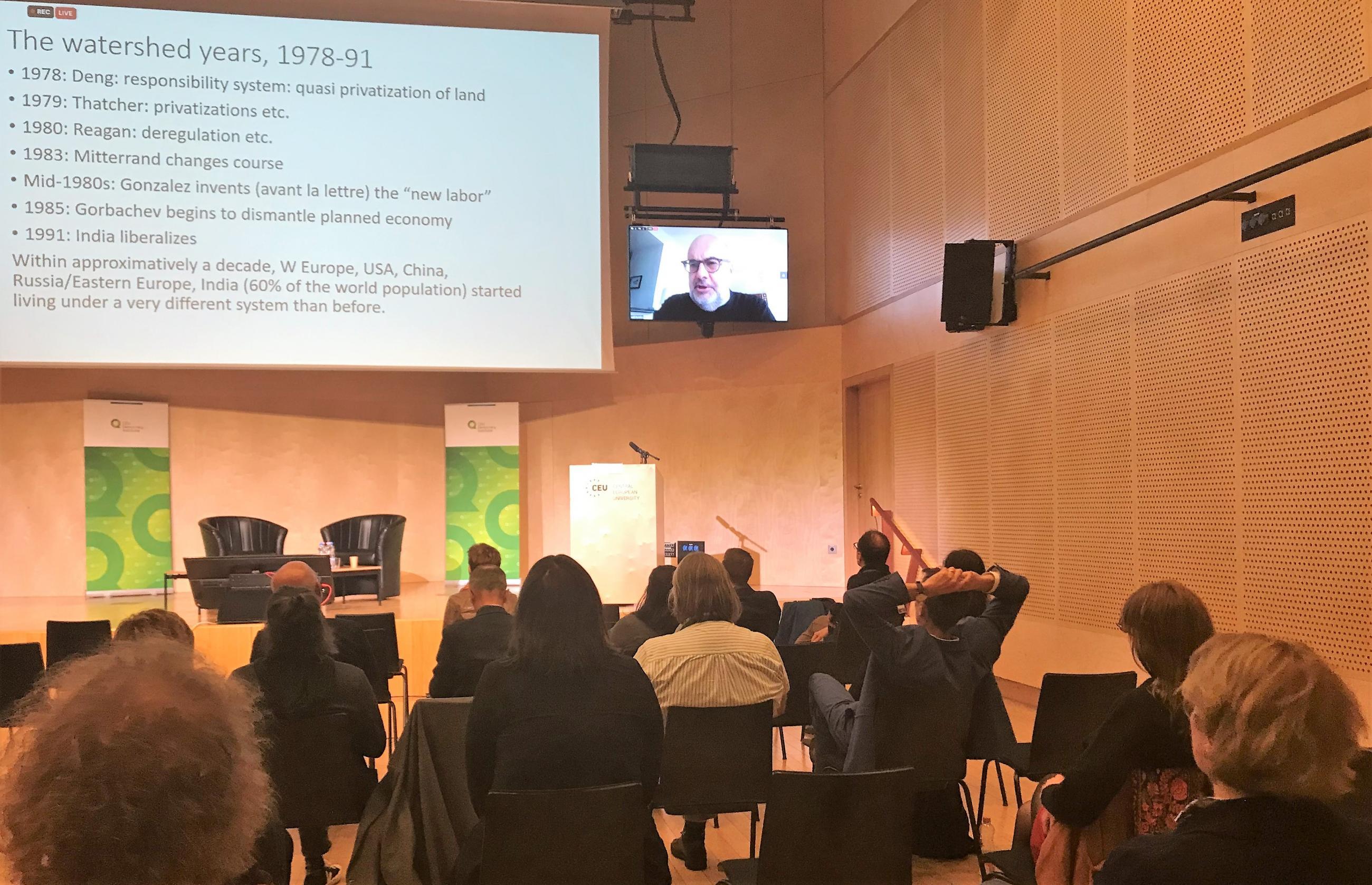 The book, co-authored by Zsolt Enyedi and Fernando Casal Bertoa maps trends in interparty relations in Europe from 1848 until 2019. It investigates how the length of democratic experience, the institutionalization of individual parties, the fragmentation of parliaments, and the support for anti-establishment parties, shape the degree of institutionalization of party systems.

Roundtable 4: Robustness of the Rule of Law: Past and Present

Recent illiberal regimes, where incumbent majorities reshape constitutional and administrative frameworks to cement their hold over state and society, reveal new questions about the legality and legitimacy of such regimes.

In the final roundtable, panelists, Petra Bard (ELTE/CEU/DI), Marta Bucholc (University of Bonn), Marc Lazar (Sciences Po, Paris) and Kolja Raube (KU Leuven), and moderator Barbara Grabowska-Moroz (DI) considered conflict between the Court of Justice and the Constitutional Courts. Additionally, they debated the EU’s reaction (or lack-thereof) to the rise of populism, how populist rhetoric has changed, and whether we should be optimistic about the robustness of the status of the Rule of Law in the EU today.

The books highlights widespread agreement that democracy today faces unprecedented challenges. Populism has pushed governments in new and surprising constitutional directions. Analyzing the constitutional system of illiberal democracies (from Venezuela to Poland) and illiberal phenomena in 'mature democracies' that are justified in the name of 'the will of the people', the book explains that this drift to mild despotism is not authoritarianism, but an abuse of constitutionalism.

Closing remarks of the conference were delivered by Eva Fodor, Co-Director of the CEU DI.
Learn more about thee speakers here.