Since 2015, CEU has offered a specialization in Jewish Cultural Heritage Studies initiated by Professor Carsten Wilke. In this essay originally published by Jewish Heritage Europe, Wilke highlights the new professional need in the face of growing interest in preserving Jewish heritage.

In many European cities and villages, grassroots activists devote themselves to protecting and promoting the heritage of former Jewish communities. Often their sympathy for the Jewish experience includes the hope of transforming their society through a revival of its lost memories. The touristic appeal of the major Jewish sites is also growing.

All this has brought about an increasing demand for professionally trained experts who have backed up their enthusiasm with solid competence in fields as diverse as Hebrew grammar, monument protection laws, and event management.

The CEU Jewish Studies Program aims to meet this demand. So far, three students have formally graduated in the combined track, writing Master’s theses in which they explore Jewish cityscapes of Central Europe and imagine new ways of promoting their heritage to tourists and locals alike.

Steadily growing scholarly literature on Jewish cultural heritage guides our academic teaching in this new discipline. Students are introduced to the history of heritage sites, their former life, and their post-Holocaust status and symbolism. On field trips, we explore best practices of heritage preservation as well as some complicated cases. 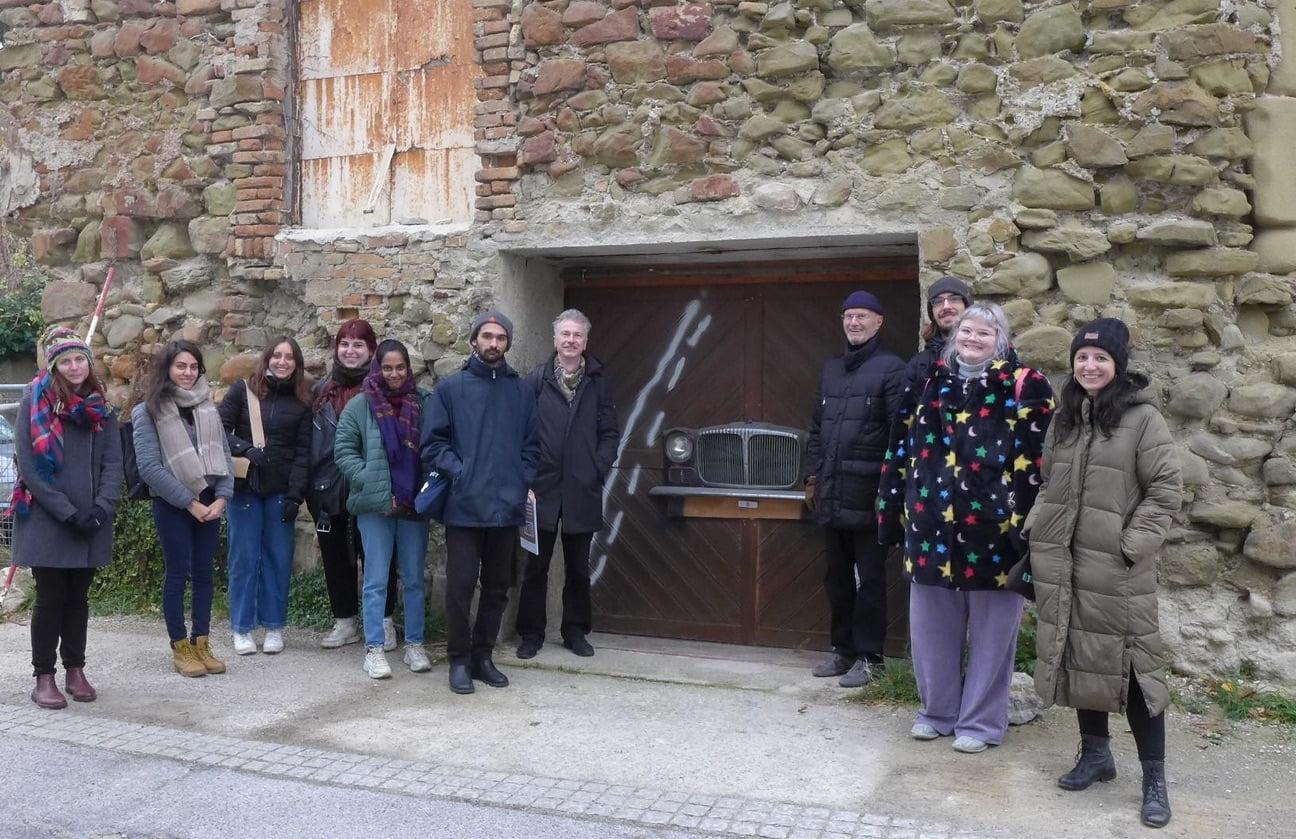 On a recent visit to the medieval synagogue ruin of Korneuburg near Vienna, which is used as a garage in private ownership, we learned from local historian Klaus Köhler about forty years of unsuccessful campaigns to restore this unique building.

We discussed the aesthetic and artistic strategies of Jewish heritage revival, the challenge of finding a concept that avoids the extremes of musealization on the one hand and virtual fakes on the other, acknowledging both the rupture of the Holocaust and the continuity of Jewish life in Europe. We reconstruct how Jews and non-Jews, tourists and locals, authorities and civil society actors have often collaborated to make the upkeep of certain sites successful, and how elsewhere, in the absence of material traces, historical awareness has come to mean collecting memories and marking voids. 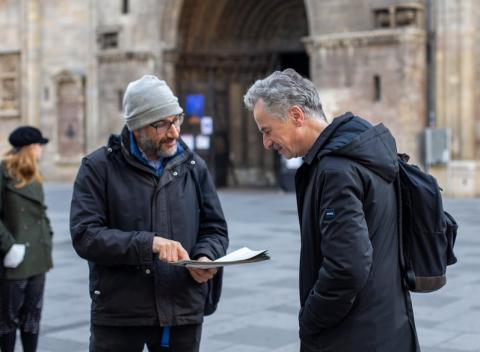 CEU’s international student body is in itself a scholarly hotbed. In one single 2021 class, I had the opportunity to hear students present first-hand accounts of Jewish heritage sites in Hungary and Germany, of museums in Israel, of cemeteries in Ukraine and Greece, of synagogues in Venezuela and Brazil.

In contrast, for student Ananya Casius, the only venue where she was able to encounter Judaism in her native India was the synagogue that serves the last four Jewish families in New Delhi. Coming from a society where Jews were inconspicuous and not persecuted, she researches the cultural dimension of the genocide perpetrated by the Nazis in Europe. For her thesis, she focuses on the legal and moral conundrums posed by the presence of Nazi-looted art works in European museums.

For student Tetiana Shyshkina, who grew up in Ukraine, the choice of Jewish heritage as an academic career was the outcome of a personal quest. “Jewish identity was a taboo in my family. I only learned that I had Jewish roots when I was 18,” she says. “I therefore have no Jewish traditional knowledge; but I know more than my mom, and sometimes I even teach her.” 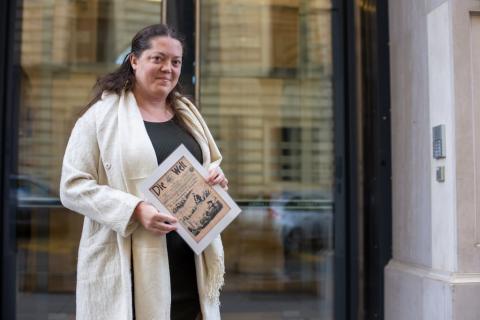 At Kyiv-Mohyla Academy, Tetiana took a Master in history and joined field trips to the countryside of what was Eastern Galicia. “When you are traveling to cemeteries you feel this abandonment,” she says. She remembers looted gravestones and burial spaces turned into private courtyards. The Ukrainian authorities mostly do not fund preservation efforts, she notes, but they allow NGOs to function; and Tetiana  has become part of their activity. Her photo documentation keeps growing, and she receives more and more invitations to translate, write and explain. “Once you have started doing something in this area, this will go on, especially when people know that you speak English and that you have knowledge in Jewish Studies,” she comments.

Abdullah Mirza, who came to CEU from South Bend, Indiana, is intrigued by other aspects of Jewish culture and heritage, specifically the various uses of Jewish cultural heritage for political ends. In the comparative study that will become his MA thesis, Abdullah is researching how the states of Israel and Pakistan were built on politicized religious identities. He has thus studied the work of Abraham Zevi Idelsohn, who served Jewish nation-building through the ethnographic collection of folk tunes and musical heritage.

While some students in the Jewish Studies Program extend their academic studies with field work, student Anna Nagy has gone in the other direction — she came to CEU after a career in Budapest’s Jewish tourism sector. 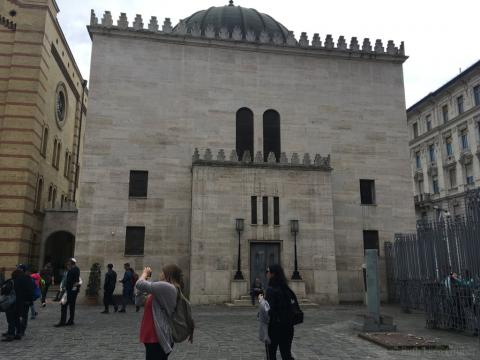 Tourists outside the Heroes Synagogue, Budapest.

She regrets that, particularly in the city’s former downtown Jewish quarter, it is synagogues and trendy new Israeli-style bars that have become the placeholders of Jewish heritage, while a large number of the residential buildings that made up the quarter’s distinctive urban structure have been demolished.

The civic initiative Ovas! (Veto!) has saved some of them; and the association Hosszúlépés (Long leap) offers alternative tours focusing on the places, stories, and biographies of Jewish life before the Holocaust. This intangible – invisible — Jewish heritage is most intensely felt when the visitor is hosted in active communities. Anna, the heritage activist maintains that Jewish heritage tourism should be a space for discussing Jewish topics, including the Holocaust, and academic knowledge has a contribution to make: “This is the most important thing: that we do research not only among ourselves, but let others benefit from it.” 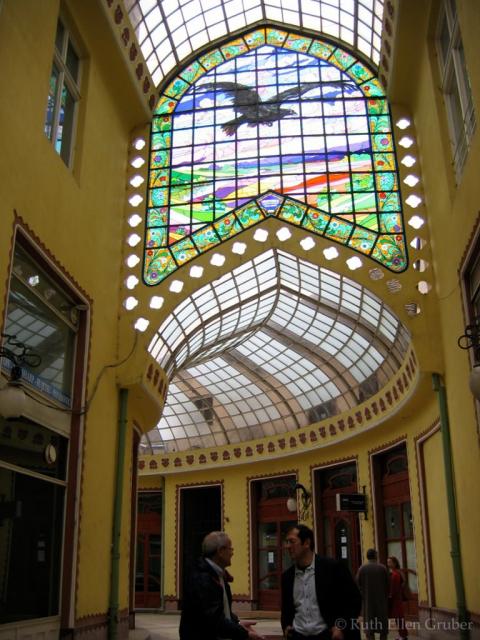 Flavia Matei’s study of Jewish heritage at CEU is likewise part of a larger social commitment. Growing up in Oradea, Romania, she was fascinated by Jewish culture, and she is now engaged in a local project that researches and highlights the imprint of Jewish entrepreneurs and architects on the Art Nouveau architecture for which her city is famous.

She has always enjoyed sharing her fascination with family, friends, and strangers — and has worked as a tour guide, speaking at times about the beauty of façades and the “dark heritage” of the Holocaust to “people who have never read a book or visited a synagogue.”  At CEU, she has blended her passion with scholarship. The feedback from her audiences, she says, has proven to her that tourism can be more than infotainment. “I believe that cultural tourism can be an amazing way to teach, to educate, and to transform people’s life,” she says, adding, “Trying to build bridges between Jews and non-Jews, trying to explain Jewish history and heritage to non-Jews, I felt that this is my place. And I understood that I needed to learn more.”

As a teacher, I find these reflections from our students profoundly encouraging, since they show that the study of Jewish cultural heritage brings together young scholars motivated by personal experience and engagement in countries throughout and beyond Europe.

I look forward to hosting future ambitious projects at this international university, which has always been eager, as one of our student group put it, to “make academic discourse tangible.”