CEU’s Department of Public Policy hosted a book launch for former CEU President and Rector John Shattuck. His latest book, entitled “Holding Together: The Hijacking of Rights in America and How to Reclaim Them for Everyone” is about the promise of rights and the struggle to realize them in America. It examines the hijacking of rights by politicians who seek power by dividing and polarizing, and how to find ways forward in which rights can bring citizens together instead of tearing them apart. Co-authored with Sushma Raman and Mathias Risse, “Holding Together” is a roadmap for an American rights revival, with insights vital for every democracy.

The event was opened by CEU Professor Martin Kahanec (ECON ‘00), head of the Department of Public Policy and acting director of the recently renamed Shattuck Center for Human Rights. Among the distinguished attendees were US Ambassador to Austria, Victoria Reggie Kennedy and former Charge d’Affaires of the US Embassy in Hungary, Andre Goodfriend. In his introductory remarks, Professor Kahanec described recent developments with respect to the Shattuck Center, so named in John Shattuck’s honor. In response to world events, the Center announced a new mission amplifying its role as an interdisciplinary hub for practical engagement on issues related to human rights and social justice.

Professor Shattuck then took the stage to introduce “Holding Together” and its relevance in a broader international context. The theme of the book is related to how democracy and human rights are under attack worldwide and how the methodology of these attacks can be grouped into three separate models and interpreted through events and the public mood in the United States.

Firstly, there is the model of authoritarian violence which we see in Ukraine today. “Violent aggression as we know, is the ultimate instrument of coercion and waging a war of aggression is the most extreme form of criminal conduct in the world equal to crimes against humanity and genocide which are also being committed in Ukraine,” said Professor Shattuck. “Putin’s war was certainly a wake-up call for Europeans and Americans who have too long taken for granted our security and democracy. And the stakes are enormous. I think of when I first learned the great phrase from Thucydides, ‘The strong do what they can, and the weak suffer what they must.’ If this war were to succeed, if Putin succeeds, the rule of force would overwhelm the rule of law,” he added.

Secondly, there is Viktor Orban’s Hungarian model, which he described as a non-violent hijacking of democracy, which is less visible but more insidious than Putin’s violent authoritarianism. Hungary has now become a case study on how easily democracies can be overwhelmed from within. For more than two decades Hungary seemed to be heading on the path to becoming a working democracy and a state governed by the rule of law. Yet in fewer than 10 years, Prime Minister Orban and his party managed to disassemble all that was built and turn the country into a semi autocratic country with many resemblances to its communist past of 50 years.

And finally, there is the third model which is most relevant to the book and the American public. This is Donald Trump’s insurrection model. In fact, it is an amalgamation of the first two models. This methodology employs the electoral process to take control—of course, only if the would-be authoritarian happens to win. If they happen to lose, they deny the loss and spread misinformation about election fraud, culminating in political violence and polarizing the electorate.

It is at this point that Professor Shattuck offered some hope, citing the fact that based on research conducted for the book during town hall meetings organized in various points of the country together with two major national polls, the American electorate at large is not susceptible to extremism. To mention but a few fundamental examples: 72% of people surveyed were fed up with polarization in general and 70% believe voting should be a birth right and provided unconditionally to every citizen. Thus, it seems that a majority of Americans are committed to democratic values and are not swayed by authoritarianism from either side of the political spectrum. He called this the “Silent Majority”.

Professor Shattuck ended his speech with a quote from late American civil rights leader John Lewis: “Democracy is not a state, it is an act. It is not some enchanted garden perched high on a distant plateau where we can finally sit down and rest. Democracy is the continuous action we all must take, and every generation must do its part.” Finally, he called on students to act—closing with the same six-word invocation he shared in all his graduation speeches at CEU: “Go forth and save the world!”

Answering this call, Professor Kahanec invited four CEU Master’s and Doctoral students to join Professor Shattuck on stage for a discussion bringing their own international perspectives to bear on the book’s findings. The students took turns sharing their experiences concerning human rights and democracy and how these values shape their studies and future plans. For example, a student from El Salvador told the audience how she arrived in the United States as a migrant and was faced with a very testing dilemma: should she continue working in her field of expertise – economics, or should she raise awareness on the plight of fellow migrants and join the fight against the Trump administration’s recently ratified policies instigated for the sole purpose of suppressing her compatriots. And this is what ultimately drove her to study human rights at CEU.

Closing the event, President and Rector Shalini Randeria expressed her gratitude to the many admirers of Professor Shattuck from around the world who contributed to creating and sustaining the Shattuck Center. She gave special thanks to the chairs of this initiative namely, Benjamin Heineman, Matthew Nimetz and Kati Marton, all of whom are former members of the CEU Board of Trustees.

Watch an interview with Professor Shattuck regarding his new book and the new mission of the Shattuck center:

Watch the entire event below: 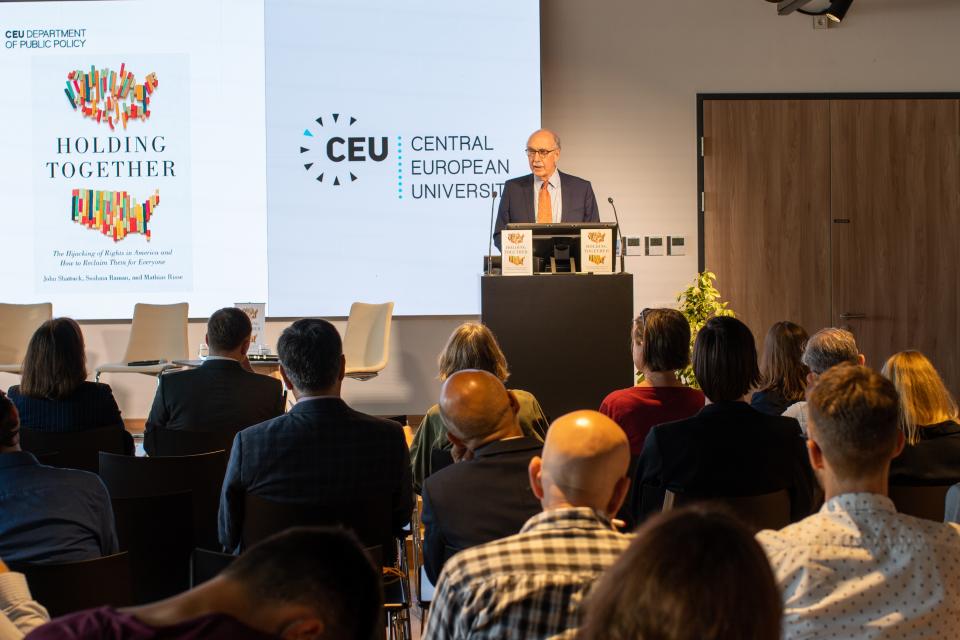