Yevhen Yashchuk, originally from Ukraine, is a second year MA student in Comparative History at Central European University. We spoke to him on the occasion of his 2022 Presidential Scholar Award. This is an edited interview conducted on November 10, 2022.

To be honest I was surprised when I received it because it's quite competitive and there are many people at CEU deserving of such an award. It awards students not only for academics but for working in fields of engagement on a very high level, so I was really happy to be in the company of the awardees and very proud to receive the scholarship because it acknowledges the work that I did both inside and outside CEU.

This work is meaningful to me and the award inspired me to continue doing those activities in various spheres. For example, I have been engaged in the Invisible University for Ukraine project which this semester has around 200 students. When I received this award, I understood it to also be a recognition of my contributions in such a project. 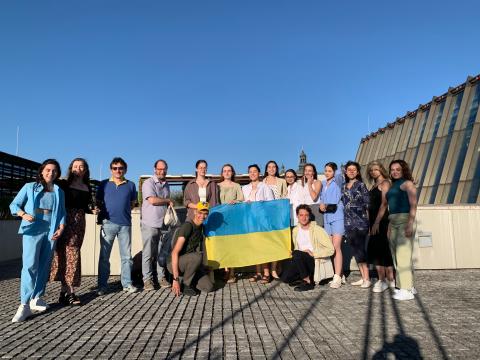 Can you talk about your involvement in the Invisible University for Ukraine?

Since late March I have been part of this project. At first I was a student coordinator and then last semester, together with professors, I was helping students with administration and helping them to increase their involvement in the project. The entire project is online and people are learning from different countries all over the world and some of those places are current war regions.

My first task was to help students understand how it works and how in particular they can access the lectures. I was a mentor for a group of students, helping them deepen their knowledge in history in particular, and discuss different issues related to their own research. This semester I became a main student coordinator. As I mentioned, we have 200 students and they all need assistance at different stages of their application and enrollment, so with my colleagues I help them to go through this process and support them through administrative questions as well as questions related to their studies. I also coordinate our core course "Ukraine: Imperial, Soviet, Independent, European" working with the professors to arrange the lectures.

So it's a lot of tasks but I'm very happy to be a part because I see how inspiring it is for those students. When I can, I try to work with them and provide assistance from my area of studies in service of bringing them to an experience of global academia.

What drives you in your work?

There are several motivators in my work. First, when I realize there's an opportunity to change something for the community and I can contribute to those changes toward a better situation, I am motivated to participate. With the Invisible University project, for example, I see the results and feedback from people who received the education and how their knowledge was broadened in an important way. When I see I am contributing in a positive way I understand how students, even in their early twenties, can make a difference. I realize I can also contribute even if I'm not close to those I am serving geographically. I can contribute to this initiative across borders and it's those people who motivate me to address issues and resolve challenges  together. When I join this flow, that's motivating.

When I was 13, I participated in a national history competition in Ukraine and at the time I met a teacher who was part of our team. She said her son was studying at CEU. This was the first time I heard about the university. When I went to my undergraduate studies in Ukraine, I learned that three of my professors were CEU graduates, and I saw how enthusiastic they were for academics and activities outside the university. Their course lectures were interesting and slightly different than other academic experiences that I had at the time. From them I learned how research has developed. When I worked with one of them as my supervisor, they suggested that CEU could be a good place to continue my studies. I wanted to apply for an exchange opportunity at CEU, but it was the year 2019 during the university’s forced move to Vienna, so I ended up not going.

Then when I was in my last year, I attended the Open Day at CEU and applied. Now, in my studies at CEU, I'm very much enjoying the different perspectives. Right now I'm doing my exchange at Utrecht University for the semester studying in the Netherlands.

What advice do you have for others applying for this scholarship?

The first thing I would say is to find something meaningful that you want to do. I believe that if you are active and engaged in projects and enthusiastic about the CEU community and you are spreading the values that the university is trying to maintain, then you should apply. Carry forward your idea and believe in this idea and this will help.

Everyone can bring something to the community. If you see that you can make a difference, it will make not only another’s life better, but also your life. That’s the first step toward bringing some openness and certainty in a world that is often closed. There are opportunities for us to participate and push for societies to remain as open and sustainable as possible, so by creating new ways to change the world, we might bring some stability and improve the certainty in the lives around us.