In response to the Russian full-scale invasion, Central European University (CEU) launched the Invisible University for Ukraine (IUFU) for students from Ukraine whose studies have been affected by the war, whether still residing in Ukraine or in refuge.

“The initiative proved to be a success,” says Balazs Trencsenyi, professor of history at CEU and one of the originators of the initiative. “In the spring we organized four online mega-courses with 140 students from 30 institutions, involving 70 instructors while also offering mentoring and English academic writing courses. In July, we met up in the form of a summer school in Budapest and Lviv, working with the students to design the program of the next semester. Based on these discussions, in the fall we continued with 7 thematic courses online for over 200 students, and had research scholarships available to 60 students,” describes Trencsenyi regarding the growth of IUFU over the nearly one year since the war began.

The organizers of the program, evoking the various 19th and 20th century underground and exile educational initiatives in Eastern Europe, as well as the tradition of Invisible Colleges formed after 1989 in the region with the name “Invisible University for Ukraine,” now look forward to the next step of their special transnational educational solidarity program: the winter school.

“With 26 students representing 11 Ukrainian Universities and coming from 15 different locations in Europe, mostly from Ukraine and Germany, we are looking forward to an exciting gathering at CEU’s Budapest site,” says Ostap Sereda, associate professor of history at the Ukrainian Catholic University and guest professor at CEU, who serves as the academic director of the program.

“The war on Ukraine not only shocked and changed our world but has also heightened our awareness of the fragility of our university’s mission to support and further the values of open society and liberal democracy. We stand up against aggression and extend support to those whose lives are devastated by this war,” says CEU President and Rector Shalini Randeria.

The IUFU winter school “Evidence and Truth – Reflecting on the War in Ukraine in a Global Context” kicks off with an exhibition opening by Emine Ziyatdinova, a London-based Crimean Tatar documentary photographer, and continues with lectures and workshops between January 21-28. It seeks to contribute to the discussions on the war experience and to facilitate a successful postwar reconstruction of Ukrainian culture and society. 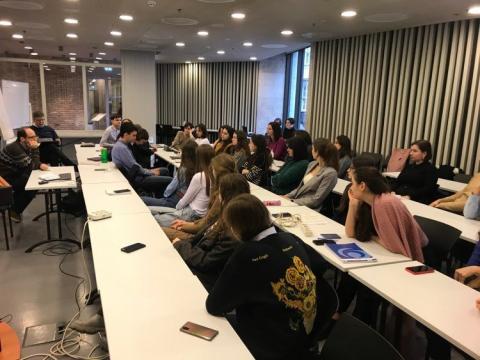 “With Ukrainian higher education shattered by the bombing, many initiatives around the world are trying to help by offering visiting fellowships to teachers, researchers and students. Our program was conceived with those in mind who cannot or do not want to leave the country, which will need them after the war,” explains CEU Pro-Rector Laszlo Kontler. “It is a moving experience to attend or deliver an online lecture, to which Ukrainian youngsters often log in from a shelter. Classes can hardly be finished because of the active participation. The students often express their gratitude, while we are the ones who should be grateful for being shown that what we are doing is necessary and meaningful.” 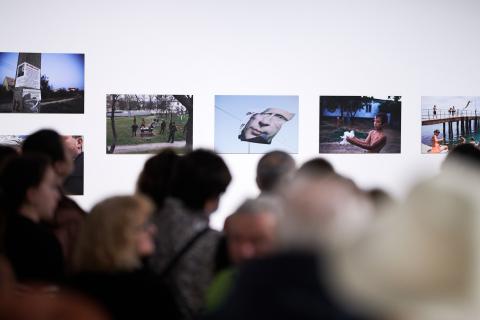 The Invisible University for Ukraine Winter School started with an exhibition opening by Emine Ziyatdinova entitled "Crimea” at the Blinken OSA Archivum in Budapest. The exhibition reflects on the photographer’s family and the larger Crimean Tatar community finding a Home in the complicated geopolitical environment preceding and following Russia’s annexation of Crimea in March 2014 when Crimean Tatars as a group once again became a target of political state persecution. For more, visit the Blinken OSA exhibition Crimea website.

Invisible University for Ukraine (IUFU) is a hybrid non-degree academic program is an emergency response to the consequences of the war in Ukraine. This certificate program for BA, MA and PhD students offers an intensive learning experience, placing questions relevant for Ukrainian students into a transnational comparative perspective. The program is not meant to replace or duplicate the existing online education in Ukrainian universities, but to support them and provide help for filling the lacunae that temporarily emerged due to the Russian military invasion.

The IUFU Winter School starts from the imperative of collecting and evaluating evidence and the need to develop strategies of verifying and evidencing truth on multiple levels – in view of the destruction of cultural heritage, war crimes, Russian propaganda campaigns, ongoing social processes such as migration and displacement, and also the complexities of national and local identity. These challenges are made even more pressing by the recent technological shift toward massification of digital images with their inherent manipulability, the rise of big data, the systematic deploying of fake news, fragmenting the public sphere and destabilizing traditional institutions of democracy. Therefore, while the last decades tended towards relativizingtruth, the ongoing war necessarily brings back questions of ascertaining truth claims, producing and evaluating evidence.. Along these lines, rather than just debating on these issues, students and lecturers at the winter school are invited to develop active and innovative strategies on how Ukrainian culture, identity, and institutional practices can be studied and valorized in view of these challenges; and how resilient civic and academic organizations can be created and maintained in the context of the war and the post-war reconstruction.

IUFU is implemented by CEU, in cooperation with Ukrainian (Ivan Franko National University of Lviv and Ukrainian Catholic University) and European (Imre Kertész Kolleg at the University of Jena) university partners. It has been supported from the start by the Open Society University Network (OSUN) with co-funding for the fall of 2022 from the Deutscher Akademischer Austauschdienst (DAAD). The Winter School is supported by the John D. and Catherine T. MacArthur Foundation.