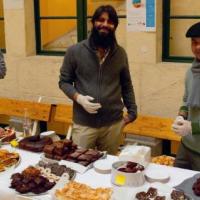 November 30, 2016
Nearly 200 members of the CEU community – students and alumni, faculty and staff – came together this month to learn just how sweet fundraising for good causes can be. As part of CEU's fourth annual Philanthropy Day, on Friday, November 11, the community raised more than 180,000 HUF in support of student scholarships and refugee assistance. 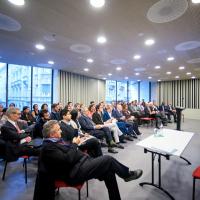 October 27, 2016
In its new building at Nador utca 15 on October 21, CEU dedicated the Quantum Board Room, named for the Quantum Fund, founded by George Soros, the success of which made the University possible. The Quantum Board Room was supported by the Foglia family, including Antonio Foglia, a London-based economist and hedge fund manager who is also a member of the CEU Board of Trustees, and his father, Alberto Foglia, who served as chairman of the Quantum Fund from 1987-2003. 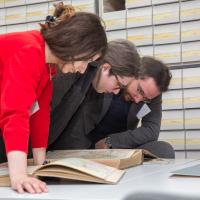 September 20, 2016
CEU and the Dietrich W. Botstiber Foundation have established a three-year Botstiber Fellowship in Transatlantic Austrian and Central European Relationships program to be housed at the Institute for Advanced Study at Central European University (IAS CEU). 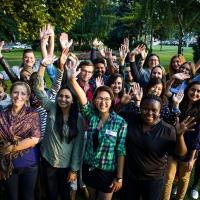 December 17, 2015
CEU’s international student body represents 107 countries across five continents. Such diversity is integral to the University’s mission to foster democracy and open society throughout the world. To ensure that all students, especially those from developing countries or regions in turmoil, have equitable access to a world-class graduate education, CEU has developed a robust scholarship program, with around 85% of students receiving financial assistance. 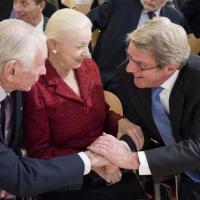 November 5, 2015
CEU's Open Society Archives (OSA) was renamed the Vera and Donald Blinken Open Society Archives at a Nov. 3 dedication event in honor of the couple, who have provided a major bequest to sustain the institution. Their gift will create a permanent endowed fund, which will allow the Archives to expand its critical work in preserving one of the world's most valuable archival collections related to the Cold War, human rights movements and grave international human rights violations.

November 3, 2015
CEU’s Center for Network Science has acquired a grant from the US Air Force Office of Scientific Research for a research project entitled "Quantifying Scientific Performance and Success in the Physics Community."

April 3, 2015
The National Endowment for Democracy (USA) has granted 45,000 USD support for CEU's Center for Policy Studies to implement a program for promoting the engagement of young Romani leaders in public service. The Roma Placement Program supports young Roma MA and PhD graduates to build professional skills and to promote their engagement in public affairs at NGOs in Macedonia and Serbia.

January 26, 2015
In line with CEU's strategic sustainability goals, the U.S. Department of State's Regional Environmental, Science & Technology, and Health (ESTH) Hub for Central and Eastern Europe has partnered with the University to provide a $30,000 grant to support a Sustainable University Network (SUN) of student environmental groups in Hungary. SUN will promote civic responsibility among future decision-makers in Hungary by developing leadership skills, promoting sustainable development training, and reinforcing a shared commitment to environmental stewardship.

December 16, 2014
Imagine a university where… Fill in the blank with what you most cherish about CEU, and consider what can be done with your support in the future. This message was the core of an electronic appeal shared with 600+ friends and donors of CEU as part of the CEU Development Office’s annual end-of-year fund drive. With growing funding needs and increasing goals, an important component of CEU’s overall fundraising strategy is to inspire annual giving and multi-year commitments among our global network of supporters.

December 2, 2014
The Ford Foundation has awarded CEU a $350,000 grant to further expand the University’s work on promoting access, rights, and justice for Europe’s most marginalized community, the Roma. CEU’s Roma Access Programs (RAP) were initiated with Ford Foundation funding in 2004 and now, as RAP celebrates a decade of success, this new grant will provide continued support the Roma Graduate Preparation Program (RGPP) – RAP's flagship program – as well as a new University-wide initiative for Roma advancement and inclusion.