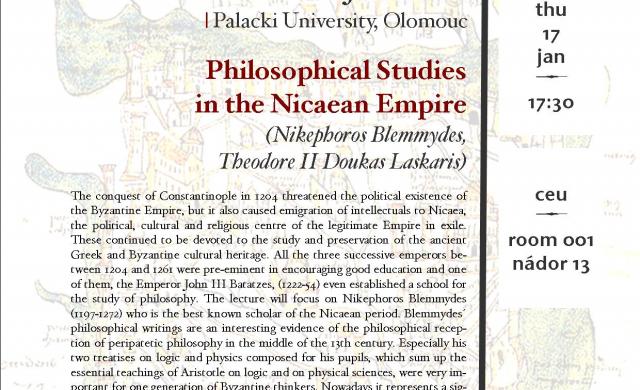 The conquest of Constantinople in 1204 threatened the political existence of the Byzantine Empire, but it also caused emigration of intellectuals to Nicaea, the political, cultural and religious centre of the legitimate Empire in exile. These continued to be devoted to the study and preservation of the ancient Greek and Byzantine cultural heritage. All the three successive emperors between 1204 and 1261 were pre-eminent in encouraging good education and one of them, the Emperor John III Batatzes, (1222-54) even established a school for the study of philosophy. The lecture will focus on Nikephoros Blemmydes (1197-1272) who is the best known scholar of the Nicaean period. Blemmydes´ philosophical writings are an interesting evidence of the philosophical reception of peripatetic philosophy in the middle of the 13th century. Especially his two treatises on logic and physics composed for his pupils, which sum up the essential teachings of Aristotle on logic and on physical sciences, were very important for one generation of Byzantine thinkers. Nowadays it represents a significant source for the understanding of the teaching of philosophy in the Nicaean Empire. Our attention will also be paid to several genuine philosophical ideas by Blemmydes´ famous pupil, the Emperor Theodore II Doukas Laskaris, mainly to his ideas of nature, communion and politics.

Jozef Matula is an Assistant Professor of Medieval and Renaissance Philosophy at the Palacky University, Olomouc, the Czech Republic. He completed his PhD. in Philosophy in 2001 with a thesis specializing in Thomas Aquinas´ understanding of imaginatio/phantasia. His research includes the Latin and Byzantine philosophy of the 13th - 17th centuries. His main fields of interest are the Late Byzantine Philosophical tradition (Nicephoros Blemmydes, Gemisthos Pletho), the reception of Aristotle and Plato in the Italian Renaissance and the history of tolerance (13th - 17th century). He also studied at the Department of Medieval Studies at CEU in Budapest and he received fellowships for research projects on Byzantine and Renaissance Philosophy (The Warburg Institute, Onassis Foundation, Villa I Tatti).