Applications for the Spring Semester are now open!

After the successful 2022 Spring and Fall Semesters, Central European University is continuing the INVISIBLE UNIVERSITY FOR UKRAINE (IUFU) certificate program (offering ECTS credits) for junior and senior undergraduate (BA) and graduate (MA and PhD) students from Ukraine, whether residing in Ukraine or in refuge, whose studies have been affected by the war. The name of this transnational solidarity program evokes the various nineteenth and twentieth-century underground and exile educational initiatives (such as the “flying universities”) in Eastern Europe, as well as the tradition of Invisible Colleges formed after 1989 in the region.

The program offers an intensive learning experience on the role of Ukraine in changing European and global contexts, placing questions relevant for Ukrainian students into a transnational comparative perspective.  The program is not meant to replace or duplicate the existing education opportunities in Ukrainian universities, but to support them by filling the lacunae that temporarily emerged due to the Russian invasion. By strengthening the ties of Ukrainian educational institutions, as well as scholars and students, to transnational networks, we hope to counter the destructive effects of brain drain through creating access to educational infrastructure and academic knowledge for students irrespective of their current location. The program is designed in a hybrid format (online teaching with a possibility of shorter on-site visit to Budapest in the form of a winter and summer schools). 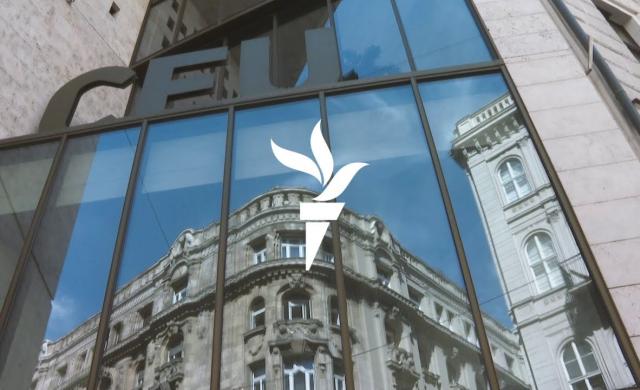 IUFU is supported by the Open Society University Network, with co-funding from the Deutscher Akademischer Austauschdienst (DAAD), as well as the as well as the Porticus Foundation, the Institute of International Education (US), and the John D. and Catherine T. MacArthur Foundation.

The educational program is comprised of three components:

- online thematic lecture courses (in the humanities and social sciences),

- mentoring (in English and Ukrainian)

The program is taught by prominent scholars linked to the Central European University (including members of its faculty, as well as researchers of CEU Democracy Institute and the Open Society Archives), Ukrainian and German partner institutions, and internationally renowned specialists of the topics from East Central Europe, Western Europe, and North America. The mentoring is offered by advanced doctoral candidates from these institutions.

Eligibility: Any student who has been pursuing a BA, MA, or doctoral degree program in a Ukrainian university in the academic year 2021-22, or who starts her/his university studies in 2022. Participation in the program is free of charge.

i.         Public History (Viktoriya Sereda and Bohdan Shumylovych) supported by DAAD, implemented in cooperation with the University of Jena

iii.         Rule of Law and Human Rights: Old Challenges and New Opportunities in Times of War and Uncertainty (Nazarii Stetsyk and Dmytro Vovk, supported by the IIE Centennial Fellowship; the class is open only for students with legal education)

Research scholarships (up to 800 Euro per semester) are available on a competitive basis for those students who wish to implement a special empirical or theoretical project in addition to their course work in IUFU, drawing on their academic background, previous work, and relevant to the current situation and/or related to the themes of the courses. Students receiving research funding will be required to submit a paper of 10-12 double-spaced pages based on their research at the end of the semester. The results of these projects will be published on the website of IUFU and the site Visible Ukraine (visibleukraine.org). Those who receive the grant are required to participate also in the mentoring sessions.

Timeline: The duration of the Spring semester classes is 13 February – 26 May 2023. The most motivated and successful participants will have an opportunity to participate in a Summer School on CEU’s Budapest campus in June.

How to apply? Applications should contain a short (up to 1 page) motivation letter including:

and a short CV with information on

Those who wish to apply for a research scholarship should include a concise project proposal (between 400 and 800 words), describing the main lines of the envisioned research project and its desired outcome, including references to the relevant sources and secondary literature on the topic.

The applications can be submitted in English or Ukrainian.

With questions about the application please turn to the IUFU student coordinators:

Deadline for research projects:19 February, but those who submit it by 5 February will also get a feedback from the organizers and might also resubmit an updated version.

APPLICATIONS SHOULD BE SUBMITTED TO iufu@ceu.edu 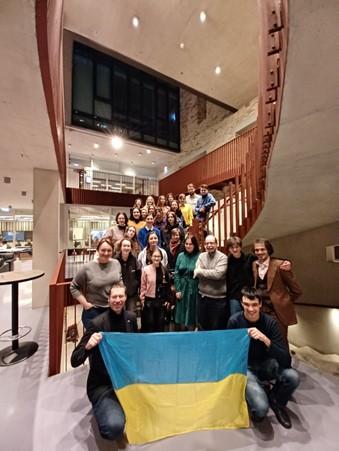 The winter school component of IUFU  hosted 26 selected participants from the cohort of current IUFU-students. It was held at the Budapest campus of CEU, with personal attendance, creating a community for the students who come from different regions and institutions. It reflected on the key intellectual problems raised by the ongoing war and the specific challenges facing students and scholars.  We started from the imperative of collecting and evaluating evidence in view of the destruction of cultural heritage, war crimes, Russian propaganda campaigns, ongoing social processes such as migration and displacement, as well as the complexities of national and local identity. 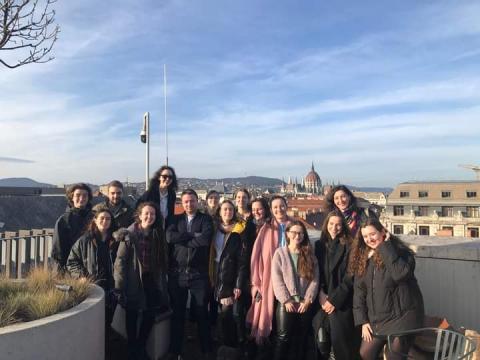 These challenges put a huge burden on all students and scholars as they have to be performed under extreme time pressure and often in existential precarity. All this is made even more pressing by the recent technological shift toward massification of digital images with their inherent manipulability, the rise of big data, the systematic deploying of fake news, fragmenting the public sphere and destabilizing traditional institutions of democracy. Therefore, while the last decades tended towards relativizing truth and pointing to the unavoidable situatedness and subjectivity of any speaker and assertion, the ongoing war necessarily brings back questions of ascertaining truth claims, producing and evaluating evidence, pushing us beyond just registering the incompatibility of perspectives.

Along these lines, rather than just debating on these issues, students and lecturers searched for active and innovative strategies on how Ukrainian culture, identity, and institutional practices can be studied and valorized in view of these challenges and how resilient civic and academic organizations can be created and maintained in the context of the war and the postwar reconstruction.

Welcoming word from the director: https://bit.ly/3EWN4nL

Joachim von Puttkamer, Professor in History at the Friedrich Schiller University of Jena and Director of the Imre Kertész Kolleg

The program categorically excludes any cooperation with scholars having current affiliation with any Russian state institutions or anyone supporting the Russian aggression. Some prominent Russian colleagues who protested against the Russian invasion in Ukraine, gave up their position, and emigrated, after being targeted by the authorities for their critical stance, will also contribute to co-teaching some of the classes. In addition, some current CEU PhD students of Russian background who publicly condemned the Russian invasion of Ukraine will take part in the small group seminars.

War, Memory, and the City. Shaping Collective Remembrance and Re-Articulation of Past in Ukraine in European Contexts(Culture/Heritage track)

Migration, Displacement and (Trans)National Solidarities in Ukraine in the Global Contexts (Society track)

Courses ii) to v) were co-funded by the German DAAD action, “Ukraine digital: Ensuring academic success in times of crisis,” and implemented in partnership with the Imre Kertész Kolleg at the University of Jena. Course vii) was implemented in cooperation with Ivan Franko National University of Lviv and the Department of Political Science and Management, University of Agder, Kristiansand, Norway.

In the 2022 Spring Semester (April-June), 130 students representing 36 Ukrainian universities and academic institutions from 15 cities attended our classes, taught by 37 mentors and 80 lecturers (most of them teaching pro bono). 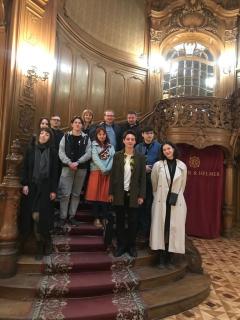 Professors Stetsyk and Petrovic with students of IUFU in Lviv, April 2022

35 selected participants from the cohort of IUFU-students participated in the summer school, held parallelly at CEU Budapest campus and the Ucranian Catholic University campus in Lviv (10-19 July).

Participating students reflected on how Ukrainian culture, identity, and institutional practices can be valorized in the global discussion and how resilient civic and academic organizations can be created and maintained in the face of different threats, coming from external oppression, or from dysfunctional, hybrid or openly authoritarian regimes. Students also discussed audiovisual and teaching materials that could articulate their voice in the debate about postwar Ukraine both internally and externally and were invited to design the curriculum for different possible courses on topics they consdered the most relevant.

The program consisted of

i, Thematic discussions on literature, cinematography, media, and memory politics

ii, Visiting institutions and communities that play an important role in defending human rights and in maintaining the alternative public sphere

iii, City walks in Budapest and Lviv about memory politics (monumentalization of the past, competing narratives, heritage projects, etc) and a daytrip to Bratislava 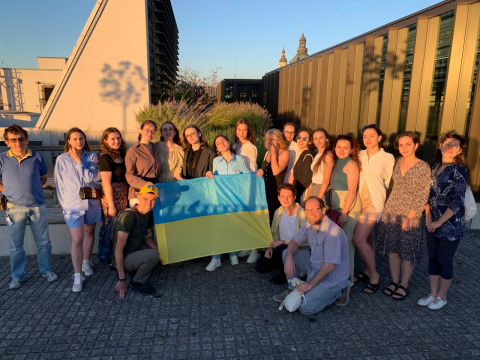 The detailed program can be found at

During the last two months, with the systematic bombing of the critical infrastructure in Ukraine, it became increasingly harder for our students to follow the classes due to the lack of electricity. In agreement with our main Ukrainian partners we are trying to provide a number of power banks and generators that could be installed in student dormitories and could provide free access for students.

The costs of the power banks are 3-700 Euro, the generators are around 1500. Some of the universities are also planning to set up permanent units that provide electricity and internet to students via Starlink. We rely on the donation line  https://standwithukraine.in.ua/ managed by our graduate student in history at CEU, Oleksii Rudenko, to transfer the sums and the objects to these institutions. If you make a donation, please add in the remarks section IUFU or Winter Help to make sure it is earmarked for this purpose. Please also note if you prefer to remain anonymous. 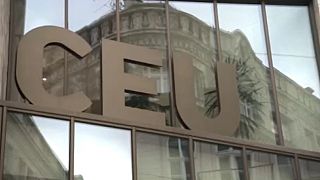