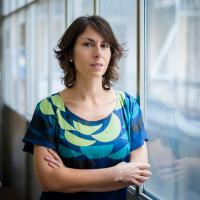 Dissecting the Darling of the French Right

While researching female-led political dynasties, CEU Professor of Sociology Dorit Geva became entranced by the President of the French National Front (FN) Marine Le Pen. A provocative figure, not only in French politics but in the EU and beyond, Le Pen is now the heir of a new political dynasty and has turned the party her father founded in the 1970s into a popular contender and lightning rod for controversy.