CEU in the International Media

September 25, 2015
Director of the Open Society Archives and CEU Professor Istvan Rev's op-ed piece on the Hungarian government's reaction to the refugee crisis is featured in the New York Times.  http://www.nytimes.com/2015/09/26/opinion/hungarys-politics-of-hate.html?ref=opinion&_r=3 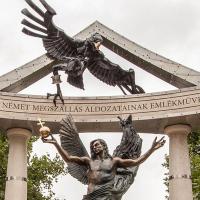 August 5, 2015
CEU historian Istvan Rev, director of the Open Society Archives, is quoted in The New Yorker regarding monuments in Budapest and the history and the controversy surrounding many of them.  http://www.newyorker.com/news/news-desk/ronald-reagan-and-other-hungaria...

November 6, 2014
CEU Professor of Political Science Andras Bozoki and Director of the Open Society Archives and Professor of History Istvan Rev talk about the fall of communism in Central Europe and the rise of Hungarian Prime Minister Viktor Orban in this piece in El Pais.  http://internacional.elpais.com/internacional/2014/11/05/actualidad/1415206029_840058.html

July 7, 2014
Foreign Policy magazine reports on the controversial monument in Budapest's "Freedom Square" (Szabadsag Ter) that is, ostensibly, meant to honor victims of the German occupation during WW II. CEU's Amy Brouillette (of the Center for Media and Communication Studies/CMCS) and OSA's Gwen Jones are quoted.

June 19, 2014
The Economist writes about the Yellow-Star Houses Project, an initiative of the Open Society Archives (OSA), CEU's sister organization. The project commemorates a dark period in Budapest's history when the city's Jewish population was forced to move into designated houses, a preliminary step toward deportation. http://www.economist.com/blogs/easternapproaches/2014/06/hungarys-history