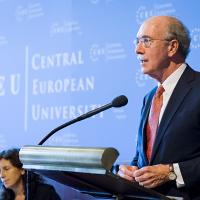 Shattuck to Lead CEU Through 25th Anniversary Year Before Stepping Down

September 14, 2015
Budapest, Sept. 14, 2015 – CEU President and Rector John Shattuck announced today he will step down at the end of this coming academic year, following CEU’s 25th anniversary. Shattuck will have served seven years in office by August 2016, the term he agreed to in 2013 when the university asked him to extend beyond his original four-year contract.