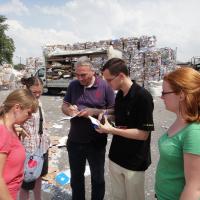 CEU Group Follows the Trail of Recyclable Waste in Budapest

July 16, 2013
In late June, five members of the CEU community got a firsthand look at the end result of recycling collection in Budapest during a visit to the FE-Group selective waste collection and processing facility in the 10th District. 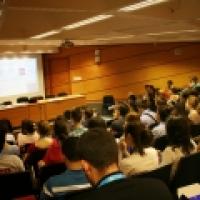 July 16, 2013
A.J. Carver and Georgiana Mihut, who teamed up a year ago at the CEU Debate Society, won the GDPPC Open debate tournament held June 21-24 at CEU. The tournament drew 32 teams from over 15 countries. It was designed as an extension of the Global Debate and Public Policy Challenge (GDPPC). Debaters from India, Pakistan, Hong Kong, New Zealand, and the United States, as well as from Hungary and the rest of the region, participated in a five-round competition with a tight schedule and some very challenging motions. 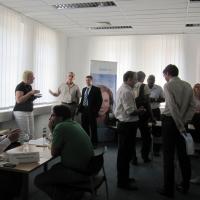 July 16, 2013
On June 21, CEU Business School held a business start-up career fair for graduating MBA students in partnership with the Hungarian Venture Capital and Private Equity Association and Primus Capital. Zoltan Bruckner, managing partner and investment director of Primus Capital, who opened the fair alongside Professor Gyorgy Bogel, compared the goal of the fair to the supply-and-demand concept of basic economics, with CEU Business School supplying the talent that the start-ups demand. 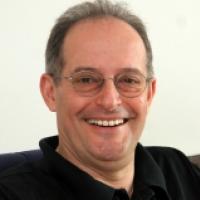 July 16, 2013
Since its founding in 1993, the Department of Medieval Studies has graduated 402 MA students and 72 PhD students and has tapped the skills of several dozen visiting faculty members from around the world. On June 14 and 15, the department celebrated its 20th anniversary with three exhibitions, seven roundtables, a concert, various field trips, and a public lecture including the recollections of five current and past department heads. 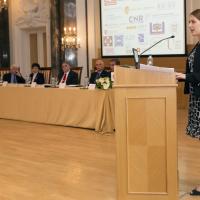 July 16, 2013
At a 25th anniversary celebration of the Hungarian Rectors Conference (HRC) in June, CEU student Henriette Stoeber presented the results of commissioned research on “The Role of the Rectors’ Conferences in Europe.” Stoeber is a student in the ERASMUS Mundus MAPP program and an HRC intern. The HRC is the supreme representative body of universities and colleges in Hungary, responsible for higher education governance and policy. Created in 1988, it was the first of its kind among Soviet bloc nations. CEU has been an auxiliary member since the early 2000s.

July 16, 2013
Electronic logo files and stationery templates are now accessible to CEU faculty and staff at O:\COMMON\CEU VISUAL IDENTITY. All faculty and staff members may access the files in the University-level folder. And all members of units participating in the University’s new visual identity system may access the files in their unit-specific folders. (The few non-participating units include CEU Business School, the School of Public Policy, their respective centers/institutes, and the Open Society Archives.)

July 16, 2013
The Communications Office published a general-purpose CEU brochure this week (see attached). It focuses on four primary topics (open society, academics, research, and engagement) and three community sectors (students, faculty, and alumni). It also includes a fold-out featuring CEU's mission and values. The brochure is a complement to the CEU annual report. The 2012-13 annual report is scheduled for publication toward the end of the calendar year. Brochure orders may be submitted to Melinda Harlov at harlovm@ceu.hu.

July 16, 2013
CEU’s Department of International Relations and European Studies (IRES) has hired three world-renowned scholars in the study of global and regional governance and global change as visiting faculty for academic year 2013-14. 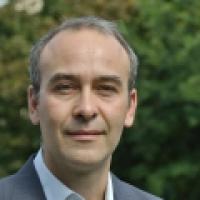 July 16, 2013
Associate Professor Thilo Bodenstein has been elected head of the Department of Public Policy, effective August 1. Bodenstein joined the department in 2009 after serving as a senior researcher at the Center for Development Studies in Bonn, a Jean Monnet chair at Freie Universitat Berlin, and a visiting scholar at the Minda de Gunzburg Center for European Studies at Harvard University. He succeeds Andreas Goldthau, who headed the department over the past two years.