October 22, 2013
CEU Business School's full-time MBA program received the Global Green MBA Program award and was ranked 27th on the global list of best 30 programs by Corporate Knights Magazine, the award-winning magazine for clean capitalism. The CEU Business School program is the only MBA program in a transition country to appear in the ranking. It ranked 4th in continental Europe and 7th in Europe when including the U.K. The annual ranking is published as a quarterly insert in the Globe and Mail and Washington Post.

October 22, 2013
The so-called “1 percent campaign” is a Hungarian government program through which employees can request that 1 percent of their taxes be directed toward a charity of their choice. In 2012, CEU employees could choose to donate to CEU, with proceeds going to its Roma Access Programs. The Development Office reports that thanks to CEU community member generosity, 1,543,872 HUF (about $7,050) was raised. 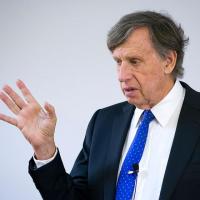 Trustee Richard Blum Makes Matching Pledge of Up to $50,000

October 22, 2013
CEU Trustee Richard Blum has pledged to match—on a dollar-for-dollar basis up to $50,000—every gift to the CEU Alumni Campaign made by alumni or others until the close of the current campaign on Dec. 31, 2013. Blum is chairman and president of Richard C. Blum & Associates, Inc., the general partner of Blum Capital Partners, L.P. He serves on the University of California Board of Regents and is Chairman of the Board for UC Berkeley’s Haas School of Business. Mr. Blum founded the American Himalayan Foundation and the Blum Center for Developing Economies at UC Berkeley. 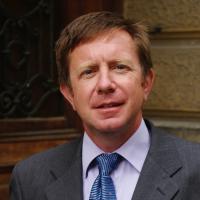 October 22, 2013
Jaroslav Miller, who earned both M.A. and Ph.D. degrees in history at CEU, has been elected the new rector of Palacky University in Olomouc, Czech Republic. Miller, who completed his doctoral degree at CEU in 2004, currently serves as head of the Department of History at Palacky. His tenure will start on Feb. 1, 2014, subject to official appointment by President Milos Zeman. This will be the second rector of Palacky with a CEU connection. Josef Jarab, who served as president of CEU from 1997-1999, came to CEU from Palacky, where he was rector for seven years.

October 8, 2013
“Following the Peacock,” a documentary film directed by Eszter Spat, a researcher in and alumna of the Department of Medieval Studies, has been accepted into competition at the Duhok 2nd International Film Festival to be held Oct. 9-16. The anthropological documentary, edited by Spat and CEU Video Program Manager Gloria Oh, introduces the Yezidi, a little-known religious minority of Northern Iraq.

October 8, 2013
CEU’s Human Rights Program was admitted as a member of the Association of Human Rights Institutes at the 2013 AHRI Annual Meeting held Sept. 10 at Senate House in London. The Human Rights Program’s application for AHRI membership was supported by several of AHRI’s 40-plus institutions, including the University of Vienna and the Human Rights Centre, Queen’s University, Belfast. Program Chair Karoly Bard expressed program participants’ strong interest in exploring the opportunities provided by this network. 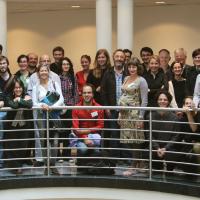 October 8, 2013
The Department of Philosophy hosted the Second PLM Conference on Sept.13-15. PLM (Philosophy of Language and Mind) is a network of philosophical centers, institutes, and academic departments in Europe whose main purposes are to further the study of philosophy of mind and language in Europe as well as provide a platform for cooperation among its members. Its 12 members are among the leading institutes in the field on the continent and in the UK. PLM is chaired by Hanoch Ben-Yami, professor in CEU’s Department of Philosophy.

October 8, 2013
CEU and the Hungarian-American Fulbright Commission signed an agreement Sept. 17 establishing the Fulbright-Central European University Teaching and Research Grant. Starting in Academic Year 2015-2016, CEU will host two U.S. academics per semester, one as a guest lecturer in a department and one as a researcher at the Institute for Advanced Study. The joint grants come with an apartment at Raoul Wallenberg House, a stipend, travel, insurance, and visa support benefits.