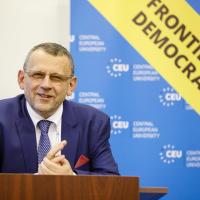 March 26, 2015
The current government is the most capable Ukraine has ever had, and the readiest to reform, said CEU Adjunct Professor Kalman Mizsei, who heads the European Union Advisory Mission on Civilian Security Sector Reform in Ukraine. His March 23 lecture at CEU was organized as part of the Frontiers of Democracy series by the Department of Public Policy.