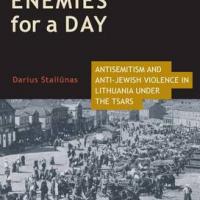 Enemies for a Day: Antisemitism and Anti-Jewish Violence in Lithuania under the Tsars

March 10, 2015
The third volume in the Historical Studies in Eastern Europe series, by Darius Staliunas, of the Lithuanian Institute of History, explores anti-Jewish violence in Lithuania under the Tsars. It begins by illustrating how widespread anti-Jewish feelings were among the Christian population in 19th century, focusing on blood libel accusations as well as describing the role of modern Antisemitism.