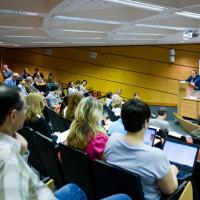 May 22, 2015
CEU’s School of Public Policy, the Center for European Union Research, the French Institute of Budapest, and the French Embassy organized a series of discussions at CEU on May 19 to reflect on freedom, religion, and security in the aftermath of the Charlie Hebdo attack on January 7, 2015. The event was part of CEU’s Frontiers of Democracy series.