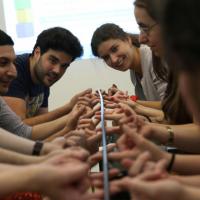 In order to equip CEU PhD students with practical skills to enhance their academic portfolios, the Alumni Relations and Career Services Office (ARCS) successfully  implemented a pilot Professional Skills Program (PSP). PhD candidates beyond their first year of study were eligible for the first two workshops on project management and the post-doc/job application process. Beginning in academic year 2015-16, ARCS will offer even more workshops on topics such as leadership skills, event organization and management, and public speaking and presentation skills.

Several changes and new appointments in the faculty of CEU took effect on August 1.

Elissa Helms re-appointed Head of the Department of Gender Studies

New features and functionalities will be available on the CEU e-learning site from Academic Year 2015/16.

1. Infosys integration
Due to the joint effort with the Infosys developers, we managed to integrate some key functions between the two systems. This enables automatic synchronization from Infosys to Moodle, so students will be automatically enrolled on their courses when they log in to Moodle from the next Academic Year (no separate enrollment is necessary).

The new Electronic Theses and Dissertations page at http://etd.ceu.hu is easier to use and is more transparent than before. The change affects both the student and coordinator pages. Eszter Deli, instructor at the Computer and Statistics Center, was the main designer of the new outlook.

Due to change in Turnitin's policy, starting from September 2015, using Turnitin services (individual access to Turnitin) will require direct login to the Turnitin site. More information and detailed instructions will be communicated later.

Why Study Source Languages at CEU?

August 4, 2015
Video of Why Study Source Languages at CEU?

August 4, 2015
Video of Book Review: The Future of Holocaust Memorialization