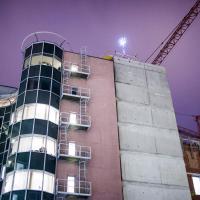 CEU’s redevelopment project reached a milestone this month - the highest point of the renewed campus. The CEU and Nador utca neighborhood communities celebrated Dec. 10 in the courtyard known as the Japanese Garden with a traditional Hungarian “topping up” ceremony, in which a tree is set atop the highest point of the building. Since the holiday season is approaching, and CEU’s project team has two cranes on site, in this ceremony the tree was carefully lifted by crane to the top of the building, set on top, and lit with holiday lights.