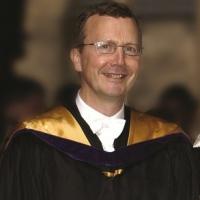 April 28, 2016
University of Glasgow Professor of Public Law Jim Murdoch was chosen as the recipient of the fifth annual European Award for Excellence in Teaching in the Social Sciences and Humanities. The award, initiated by the Central European University’s Provost and Pro-Rector Liviu Matei and overseen by the University’s Center for Teaching and Learning (CTL), aims to promote excellence in teaching across the European Higher Education Area (EHEA). Murdoch will be given the Award and its accompanying €5,000 Diener Prize at CEU's Opening Ceremony for the 2016-17 academic year in September.

April 19, 2016
CEU Teaching Development Grants aim to support individual faculty members in the development of teaching projects. The grants are available on a competitive basis with funds up to €2,000 euros per project per academic year.