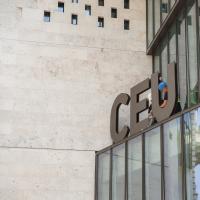 June 30, 2016
CEU's campus redevelopment project reached a milestone June 24 when the large "CEU" letters were affixed to the new Nador 15 facade. Excitement is building as the end of Phase I of the three-phase project approaches and CEU prepares to open the new Nador 15 and the renovated Nador 13, which will house a new, large auditorium, the five-floor library, CEU Business School, and several other academic and administrative units. 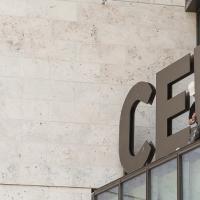 June 30, 2016
The Nador 13 and 15 buildings are visibly coming to life every day (Phase I), and work has already begun on Phase II of the project.  Here is an overview of the two phases and the progress we have achieved. Phase I: Phase I, Nador 13 and 15, will be completed in August and units will move into these new buildings in time for the start of next academic year.  The opening of the two buildings will be only slightly later than originally planned.  The General Contractor is committed to the following handover dates: