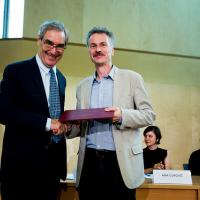 September 26, 2016
At CEU’s 26th Academic Year Opening Ceremony on September 16, 2016, Provost/Pro-Rector Liviu Matei presented the 2016 CEU Award for Outstanding Research to Professor Gergely Harcos of the Department of Mathematics and its Applications for a co-authored paper that solves a fundamental problem on hyperbolic manifolds whose roots are in quantum mechanics and number theory.