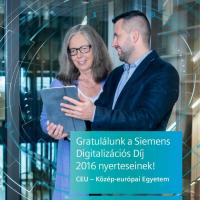 November 28, 2016
CEU received the Digitalization Award 2016 from Siemens Zrt. in recognition of its leadership and accomplishments in using digital technologies to optimize activities across the institution. The prize was presented at the Siemens Gala 2016 at the Varkert Bazar in Budapest on November 24, and was accepted by IT Director Szilard Bedecs. Library Director Diane Geraci was also honored.