June 6, 2017
Video of Careers in EU and European Affairs - Presentation 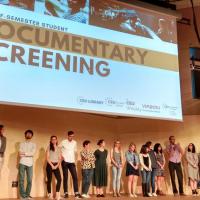 June 6, 2017
Something novel has been happening at CEU this year. Students of social anthropology, business, history, nationalism, public policy, and other disciplines have been turning into filmmakers. As part of their discipline-specific studies, students are attending new documentary filmmaking courses held in the CEU Library’s Mirabaud Media Lab.

Call for Artists in Academia

June 6, 2017
‘Art IN academia’ is envisaged as an artistic event consisting of an exhibition and possibly a series of performances targeting young scholars involved in academia on the levels of Master, PhD and Post-Doctoral research, who plan to pursue artistic career upon their graduation, strive to create art on a professional level while doing academia, or used to follow an artistic path but have chosen to devote themselves to academia exclusively. The main objectives of ‘Art IN academia’ are the following:

Call for Volunteers for Tolerance Day

June 6, 2017
The Human RightS Initiative seeks volunteers for the “Tolerance Day” of Daniel Berzsenyi High School. Around 20 students (15-18 years olds) will take part in a 60-minute session on human rights, in particular on the right to education and non-discrimination around the world on Wednesday, June 14, 9 am – 10 am. 2-3 volunteers are needed to join and participate in the session, introducing a concrete issue or case connected to the topic of equal access to education. 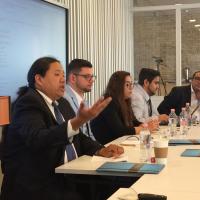 June 6, 2017
Eleven Roma leaders and U.S. State Senator Kevin Killer gathered at CEU May 22-23, 2017 to discuss political narratives regarding minorities at the workshop and panel discussion entitled “Empowering Roma Young Leaders to Shape Inclusive Narratives.” The event was part of a project by Roland Ferkovics within the context of the German Marshall Fund of the United States’ (GMF) Office of Transatlantic Leadership Initiatives, and was supported by the GMF and CEU’s Roma in European Societies Initiative. 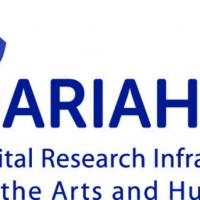 June 6, 2017
The General Assembly of the Digital Research Infrastructure for the Arts and Humanities (DARIAH) unanimously accepted CEU’s application, submitted by the Digital Humanities Initiative and the Academic Cooperation and Research Support Office to become a cooperating partner of DARIAH’s European network. 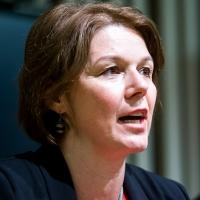 June 6, 2017
Name: Eva Fodor Title: Pro-Rector for Social Sciences and Humanities Number of years at CEU: 13 (a lucky number) Home city/town & country: Budapest What's your favorite Hungarian food?   Pad Thai - its Hungarian interpretation. Whose works of art or design have had the greatest impression on you? Every one of El Greco's paintings.  They are just beautiful. 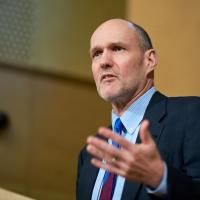 June 6, 2017
Liberal democracy has been more successful than other types of government by many measures, meaning it should prevail, according to Stephen Walt, professor of international affairs at the Kennedy School of Government at Harvard, speaking at CEU at a President’s Seminar May 29, part of the Rethinking Open Society series. Walt, known as a realist, outlined the recent failures related to liberal democracy and open society, and listed a set of remedies.