October 24, 2017
Central European University is pleased to announce the seventh annual European Award for Excellence in Teaching in the Social Sciences and Humanities. This pioneering award, first announced in 2011 on the occasion of the 20th anniversary of Central European University, honors academics in the social sciences and humanities who teach at higher education institutions in the European Higher Education Area. The Diener Prize of 5,000 euros, which accompanies the award, is made possible by a generous gift from Steven and Linda Diener in memory of Ilona Diener.

Meet Maurizio Pirro, Recipient of the European Award for Excellence in Teaching

Meet Petra Aczel, Recipient of the European Award for Excellence in Teaching 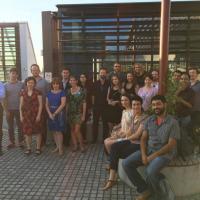 July 4, 2017
Since the launch of CEU’s Global Teaching Fellowship Program (GTFP), an innovative outreach program in 2015, a total of 31 advanced doctoral candidates and recent doctoral graduates of CEU have taught at one of our 16 partner universities in Hungary and abroad.