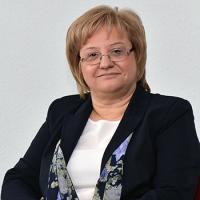 January 20, 2017
Mariana Kotzeva (ECON ’93) was appointed Acting Director-General of Eurostat, the statistical office of the European Union located in Luxembourg, effective January 1, 2017. Kotzeva, who was visiting professor in the Department of Economics at CEU from 1998 to 2002, joined Eurostat as a special adviser in April 2012 and was appointed Deputy Director-General in July 2014.