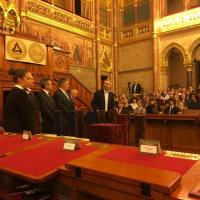 Albert-Laszlo Barabasi, visiting professor at CEU’s Center for Network Science and the Department of Economics, was awarded the Gabor Denes Prize, an honor presented each year to Hungarian scientists who have demonstrated extraordinary innovation.  The prize is named for physicist, electrical engineer, and humanist Dennis Gabor (1900-1979, known as Gabor Denes in Hungarian), who won the 1971 Nobel Prize in Physics for inventing the hologram. The award was presented to Barabasi and 12 other scientists on Dec. 22 at the Hungarian Parliament.