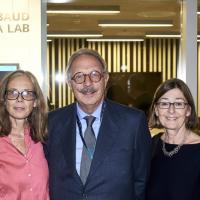 December 6, 2016
The CEU Library is a second home to many students and has long been considered one of the best in Hungary, as well as a vital asset to scholars throughout Central and Eastern Europe. Now, with the first phase of CEU’s campus renewal completed, the new CEU Library has a prominent and expanded presence on campus, occupying five floors of the new Nador 15 building.